33 million people are refugees in their own countries

Share All sharing options for: 33 million people are refugees in their own countries

The word "refugee" technically refers to people forced, usually by violence or the prospect of violence, to flee their home countries. But internally displaced persons (IDP), or people who've fled their homes for another location in their home country, are actually much more common. And, worldwide, the number of total IDPs was higher in 2013 than it's been in twenty years. Last year, 33.3 million people were living as displaced.

That's the finding of a new report from the Norwegian Refugee Council, a widely respected NGO currently helmed by former UN High Commissioner for Refugees Jan Egeland. The council produced this map showing the main centers of the problem. 63 percent of displaced people live in one of five countries: Syria, Colombia, Nigeria, the Democratic Republic of the Congo, and Sudan. 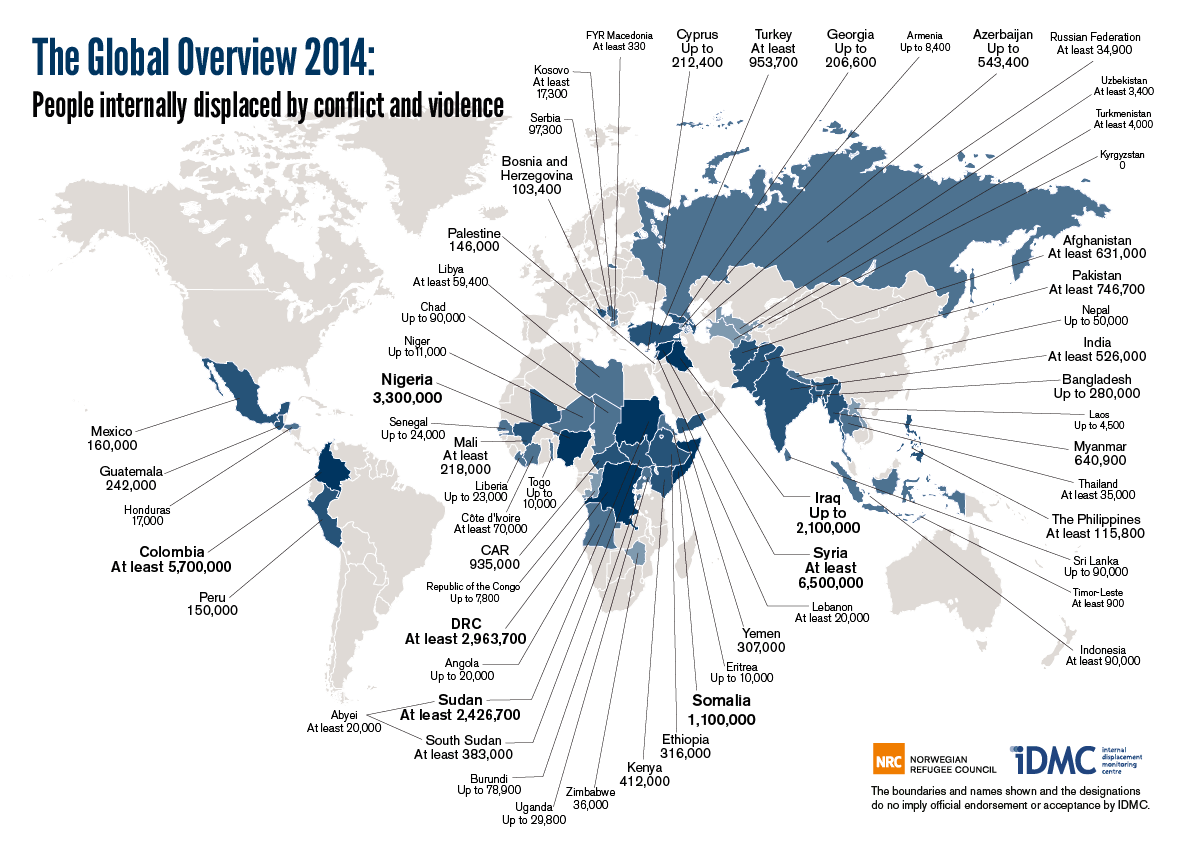 Courtesy of the Norwegian Refugee Council.

The civil war in Syria has displaced at least 6.5 million people, the most of any country, but number two is somewhat surprising. Colombia's internal struggles with the FARC (which began as the armed wing of the Colombian Communist Party but is now an all-purpose criminal syndicate) have displaced at least 5.7 million people over several decades of fighting. "Around 300,000 people are thought to have been newly displaced each year since 2000," the report says.

That rate is slowing somewhat as Colombia pursues a negotiated peace with the FARC, with 156,918 people newly displaced in 2013, and the report credits the government with improving policies surrounding the compensation and assistance of displaced people. But there's still a lot left to do in terms of speeding up immediate assistance, reliably dispensing reparations, and helping displaced people reclaim their land.

Also notable is Nigeria, whose government only recently started releasing data on internal displacement. The report credits the startlingly high 3.3 million figure both to Boko Haram's insurgency in the north of the country (which has been in the news because of the group's kidnapping of over 300 schoolgirls, 276 of whom remain hostages) and to the government's counterinsurgency efforts. The conflict has displaced two million rural Nigerians into the northern city of Maiduguri, officials there say. You can read more about Nigeria's internal conflict in Max Fisher's "9 questions about Nigeria you were too embarrassed to ask."