Share All sharing options for: Should paying for rape kits mean less money for victim services?

According to a new study from the Urban Institute, most states are taking money away from victim support services in order to provide free medical forensic exams (often called "rape kits") to sexual-assault victims.

States are required to pay out-of-pocket costs for victims' forensic exams in order to qualify for certain federal funds to fight violence against women. And the federal government is serious about this requirement: when some states started requiring victims to report their assaults to police before they'd be reimbursed for their rape kits, the federal government tweaked the law in 2005 to require states to cover the costs of all victims, whether they ended up reporting an assault to police or not.

Rape kits can eat up a large portion of the victim compensation fund's budget. In Indiana, 78% of the state's compensation fund went to rape exams in 2013 — no other state comes close to that, but several states do spend over 20%. 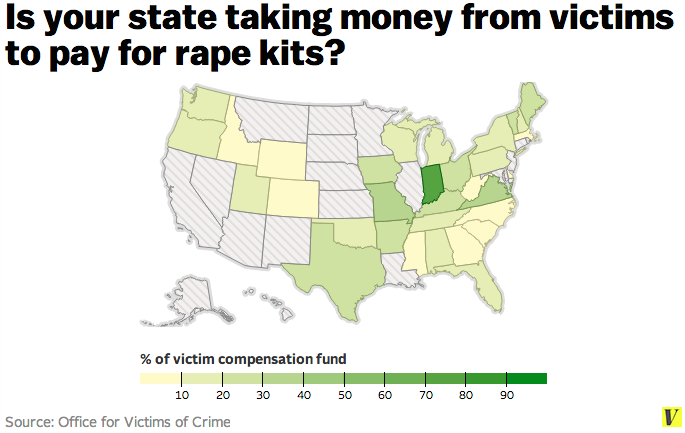 States can argue that providing free medical exams counts as a service to victims — especially when those victims don't end up reporting the crime to police. But they haven't always allocated more money to victim compensation funds to cover the costs. The federal government is supposed to reimburse states for 60% of what victim funds spend on services, but over the past few years it's been more like 20%. And the new federal requirements for states to pay for rape kits went into effect just as states got hit with a recession that led to more requests for victim services, and state budgetary crises that meant states had less money to give.

Several state officials told the Urban Institute that with all of these factors, there just isn't room in their victim fund's budget to cover the additional cost of rape kits without cutting something else. That means, the Urban Institute report concludes, that victim funds are being forced to choose between providing rape kits and providing other forms of support to victims. And since rape kits are federally mandated, other forms of support are inevitably getting cut.