What revamping Secure Communities would do

Share All sharing options for: What revamping Secure Communities would do

Here's another change that might result from the Obama Administration's ongoing "review" of immigration policies: revamping Secure Communities, Obama's signature local-federal collaboration program for immigration enforcement. Reports suggest the administration wants to change the program so that local cops are only turning over violent criminals to ICE for deportation, not immigrants who had committed no crime or minor crimes. (This article has more background on what Secure Communities is and how it works.)

David Nakamura of the Washington Post talked to several police chiefs who met with DHS Secretary Jeh Johnson yesterday, and Austin police chief Art Acevedo summed up what they took away from it:

"We are going to see a reboot of Secure Communities, and once that comes out, you'll see a singular focus in state and local counties on violent criminals."

The Obama administration has been saying from the time it stepped into office that Secure Communities focuses on dangerous criminals, even in the face of evidence showing that wasn't true. But it's possible that they'll scale back the program now, so that only serious criminals are taken into ICE custody from local law enforcement.

How much would scaling back Secure Communities reduce deportations?

DHS would probably restrict the use of Secure Communities to bring immigrants into ICE custody to the people it currently calls "Level 1" criminals. (DHS defines "Level 1" criminals as people who have committed one "aggravated felony" or two felonies, but independent data shows that immigrants can be labeled Level 1 criminals for everything from disturbing the peace to cashing a check with insufficient funds.)

That change could mean 50,000 fewer deportations a year — or reducing all deportations from the interior of the US by as much as a third, going on data from fiscal year 2013 (available here and here): 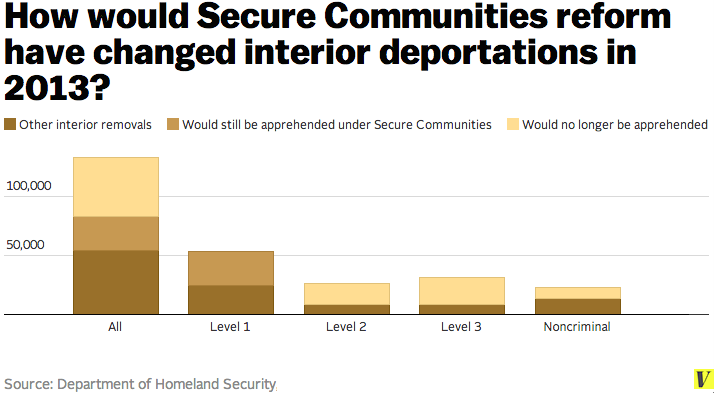 As the chart shows, scaling back Secure Communities wouldn't have much of an impact on the deportation of immigrants who hadn't committed any crime. Most of the impact would be felt by immigrants convicted of what are called "Level 3" offenses, which are overwhelmingly minor crimes (including offenses like driving without a license, which is the same thing as driving while unauthorized in most states). 22,561 immigrants got deported after getting apprehended by Secure Communities as "Level 3" offenders last year — under a reformed system, they might not have been.

But there's a massive asterisk with this data: some of these immigrants also fell under DHS' other priorities for deportation: immigrants who had returned to the United States after leaving or being deported, "immigration fugitives" (immigrants who'd been issued a final order of deportation but were still in the country), and "recent border crossers" (people who had entered or reentered in the last three years). According to DHS, 60% of all "Level 3" immigrants who got deported in 2013 also fell into one of these other categories.

Multiple advocates and observers, including former ICE head John Sandweg, have called on the administration to revamp its "priorities" such that people with prior deportation orders aren't targeted. If the administration does that in addition to reforming Secure Communities, they could start having some real impact.