Share All sharing options for: Student debt is going up. Graduates' incomes aren't.

Today the New York Fed released its quarterly report on household debt, and as has become the norm, the student debt figures were the most compelling figures in the whole report. Americans had $1.1 trillion in student debt in the first quarter, compared to $659 billion in credit card debt. As recently as 2010, credit card debt exceeded student loan debt.

Watching total student debt levels and delinquencies continue to rise, even while other areas of household debt heal from the recession has a slow-motion trainwreck feel to it; it's fascinating but horrifying. And even more horrifying is that young college grads' wages aren't keeping up with the trend.

Below is a look at average student loan debt for 25-year-olds with student debt over recent years. 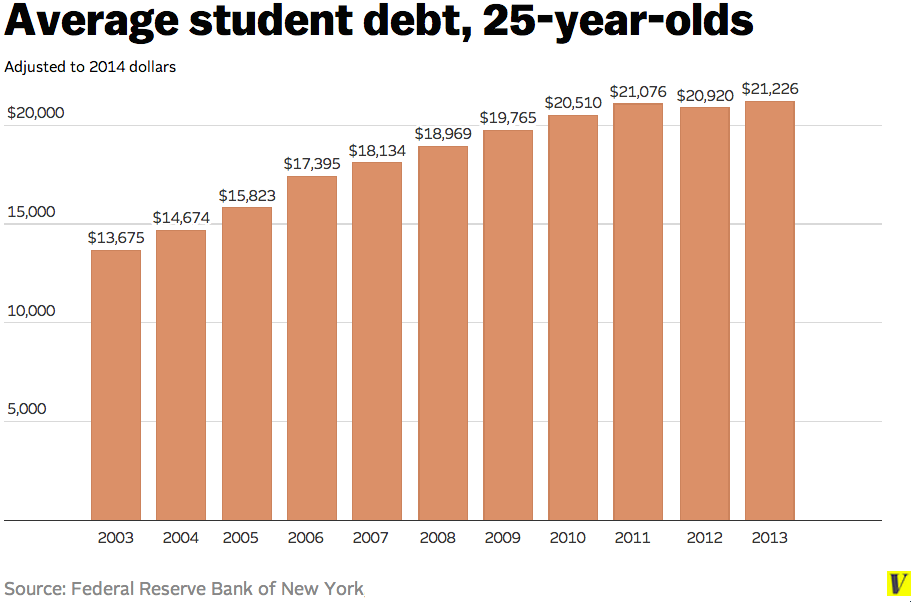 So student loan debt has climbed by more than 50 percent over the course of a decade, and that even takes inflation into account. In addition, the share of 25-year-old graduates with debt has grown from around 25 percent to nearly 45 percent over that period.

But annual pay does not appear to have kept up for bachelor's-degree holders. Below is a look at median pay for 25- to 34-year-olds with bachelor's degrees: 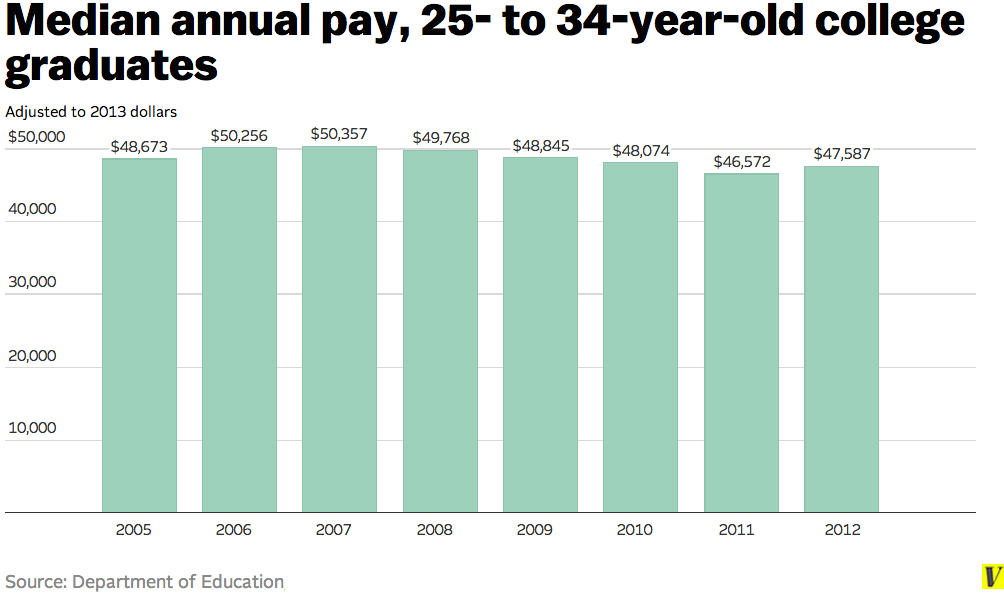 Two caveats here: one, the first chart covers 25-year-olds, while the next chart covers 25-to-34-year-olds. And one bigger caveat: the student debt figure is an average, and the wage data is median (the Education Department only has select years of average salary data available). That means these aren't exactly apples-to-oranges comparisons.

In particular, the median student debt level for 25-year-olds is probably a bit lower than the average. That's because student debt isn't distributed evenly: a small share of student borrowers has a big chunk of debt, and vice versa. That said, average wages have also fallen over the long term, along with the median. From 2001 to 2009, the real average annual salary for a college graduate, age 25 to 34, fell by 3.9 percent, according to the Department of Education. And though those people are well out of college, these figures at least point to a steady closing of the wages-vs.-debt gap.

It's still true that college has huge economic benefits, despite the costs and a crappy job market. But the gap between costs and returns appears to be diminishing.