Businesses say they can't find qualified workers. Are they right?

Share All sharing options for: Businesses say they can't find qualified workers. Are they right?

Small business confidence has hit its highest point since 2007, according to a new survey from the National Federation of Independent Business.

That's great news, but one area where businesses aren't feeling confident is in the qualifications of the people applying to their job openings.

Today, 41 percent of small businesses say they have few or no qualified applicants for the jobs they have open, up nearly 10 percentage points from three years ago and 16 points up from 2009.

This still seems to indicate a pattern of increasingly incompetent US workers. Altogether, 51 percent of businesses said they were hiring in the last few months, so it would seem that most businesses that were hiring had trouble finding anyone they deemed suitable.

businesses say they can't find qualified workers, but is it possible they're wrong?

That said, is it possible those businesses are wrong? The question of whether there is a skills gap has been one of the most hotly debated economics topics since the recession. Some experts think so. Peter Cappelli, a Wharton School professor of management who is one of the loudest voices in the skills gap debate, has said that it also might be a function of businesses having unreasonable standards or being unwilling to train new workers.

Wait for the perfect worker to fall into your lap, in other words, and you'll be waiting forever. Try to mold an applicant into a perfect worker, however, and you can start right now.

Paul Krugman also argues that the skills gap is overblown — if there were a major gap, he has argued, they would be ramping up wages in an effort to lure and retain the qualified applicants that are out there, and there isn't much evidence of that happening.

So it could be that businesses need to ease up a bit and become more open to hiring, or it could be that workers really are too underqualified to work in the open jobs. Some experts have pointed to the large share of long-term unemployed people as a sign of a gap — if those people who have been out of work for six months truly had the skills, the thinking goes, they would be employed right now.

Either way, businesses' hiring plans aren't exactly looking sunny right now. While they've improved since March, they are still well below where they were pre-recession. Right now, the difference between businesses that say they will increase and decrease hiring is only 8 percentage points. 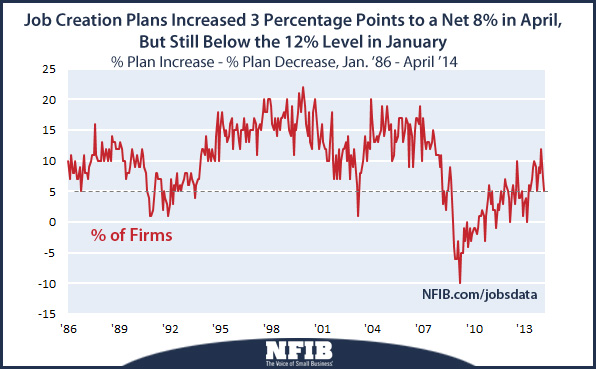