At least 102 transgender people have been murdered this year

Share All sharing options for: At least 102 transgender people have been murdered this year

Two new reports offer grim reminders that, while the US is making progress on LGBT rights, there's still a shocking amount of violence perpetrated against LGBT individuals around the world.

One preliminary report, released by the Trans* Violence Tracking Portal (TVTP), found that more than 100 transgender people were murdered in 12 countries so far this year. The other report, from Sexual Minorities Uganda, showed a huge increase in acts against LGBT people in Uganda after the government there passed a law forbidding homosexuality.

At least 102 transgender individuals were murdered so far this year

Although the records don't explain the motive for each incident, Allison Woolbert, founder of TVTP, pointed to anti-transgender attitudes as a prominent cause.

"All of the murders that are in our system are directly due to the societal conditions in which transgender people are forced to live," Woolbert explained in an email. "The suicides, the violence, the missing persons, and the murders are all directly related to a person's gender identity."

Some of the deaths were particularly gruesome. In one reported case, an eight-year-old boy was beaten to death by his father for being transgender. In another, a 14-year-old was strangled and stuffed under a bed.

The reported deaths were heavily concentrated in South America. Seventy-two of this year's murders originated in Brazil, zero in the United States, and one in Canada, according to the report. 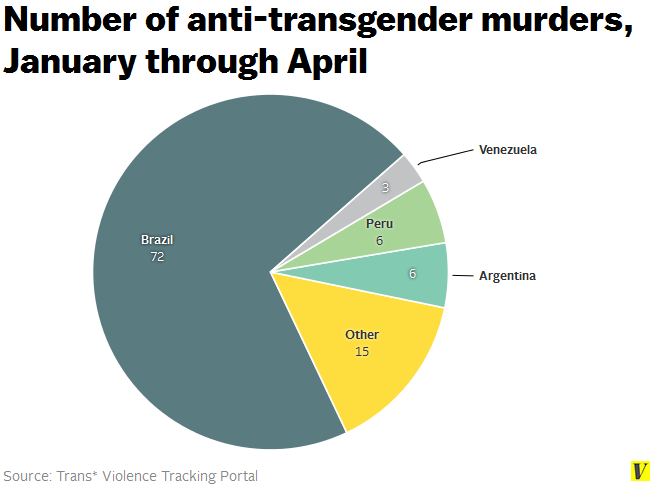 "Brazil is the murder capital of the world," Woolbert said. "They have more murders in general of every population whether a minority or not. There is also a serious 'machismo' happening in Brazil with severe conflicts towards those outside of the gender norms. They are by far the worst that we have gotten reporting from in the project right now."

TVTP's report is still preliminary. Only 12 countries have reported in so far, and organizers hope to gather data from all corners of the world. And since TVTP is a relatively new organization and relies on self-reports for its data, it's most likely catching only a fraction of what's happening to the global transgender community.

Still, the report provides a small glimpse into all-too-common acts of violence against transgender individuals. TVTP estimates that, although transgender people make up only 1 to 1.5 percent of the world's population, they're 400 times more likely to be assaulted or murdered than everyone else.

Uganda's LGBT community is under attack 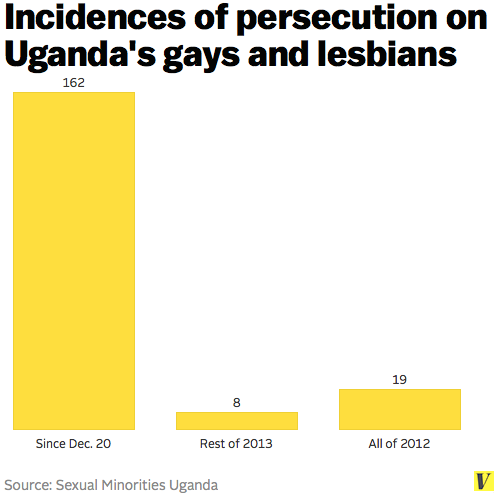 Sexual Minorities Uganda, however, emphasized that their survey might underestimate the number of attacks, since the organization relied on self-reports and its own independent verification. So it's possible the number could be even higher than 162.

The report, unfortunately, validates previous concerns: Uganda's LGBT activists warned that the country's anti-gay law would inspire violence against gays and lesbians in a country that already perceives homosexuality as immoral.

As all this goes on, the Ugandan government is prosecuting two LGBT Ugandans under the country's anti-gay laws. If the prosecution is successful, it could be another terrible sign for Uganda's estimated 500,000 LGBT people and further encourage acts of violence against a vulnerable minority population.