Marco Rubio is denying climate science because of immigration

Share All sharing options for: Marco Rubio is denying climate science because of immigration

On Sunday, ABC aired a segment where Sen. Marco Rubio (R-FL) voiced disbelief in the scientific consensus that human activity is the main cause of climate change. "I do not believe that human activity is causing these dramatic changes to our climate the way these scientists are portraying it," Rubio said. "And I do not believe that the laws that they propose we pass will do anything about it, except it will destroy our economy." Jump to 5:13 of the below video for the climate comments, which are transcribed here.

Outright disbelief in climate science is new for Rubio  — previously, he's tended to emphasize his agnosticism. When his first US Senate run began in late 2009, he said, "I'm not a scientist. I'm not qualified to make that decision. There's a significant scientific dispute about that.'' And just last year, he's said he's seen "reasonable debate" about whether human activity was the main factor.

Previously, that might have been enough to appeal to conservatives, without sounding totally extreme. But Rubio's political situation has changed, as he looks toward a potential 2016 presidential run. He now faces the crucial problem that he's lost conservatives' trust — and his shift on climate should be understood as an effort to regain it.

in polls, Rubio has plummeted from the top of the gop presidential field to near the bottom

Let's take a look at the presidential primary polls — though, yes, they're mostly meaningless this early. The GOP polls have been particularly noisy and crowded, with no candidate even managing to hit 25 percent support in any so far. Still, as Rubio's team looks at these polls, it can't seem like good news that their candidate has plummeted from the top of that inchoate field to near the bottom. (In recent Iowa and New Hampshire polls, his showings are similarly grim.) 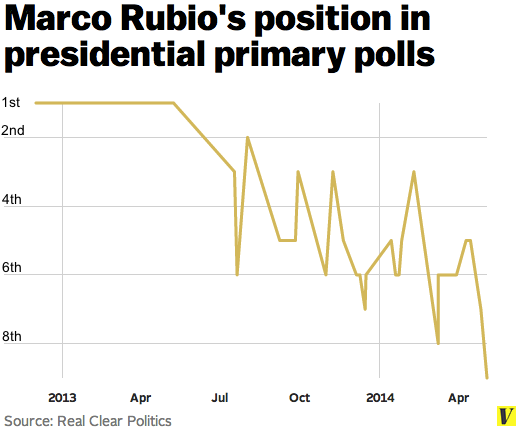 It seems that Rubio has really bungled his pre-campaign — and the only plausible explanation is his involvement in immigration reform. Before it, Rubio hasn't broken with conservatives on any major issue. And as the GOP's poor performance among Hispanics gained increasing attention in late 2012, Rubio seemed the natural solution. From December 2012 to May 2013, Rubio had first place in all 6 national polls tracked by Real Clear Politics. "In four years, we'll be inaugurating President Marco Rubio," conservative columnist Matt K. Lewis wrote that January.

But Rubio then joined the "Gang of 8" that crafted the Senate's bill , which provided a path to citizenship for 11.5 million unauthorized immigrants while beefing up border security. Most of the GOP-aligned business interests, and its political consultant class, supported the effort as both good policy and necessary political outreach to Hispanics. "Let's bring these people out of the shadows," Rubio said in an April press conference. "Leaving things the way they are, that's the real amnesty." 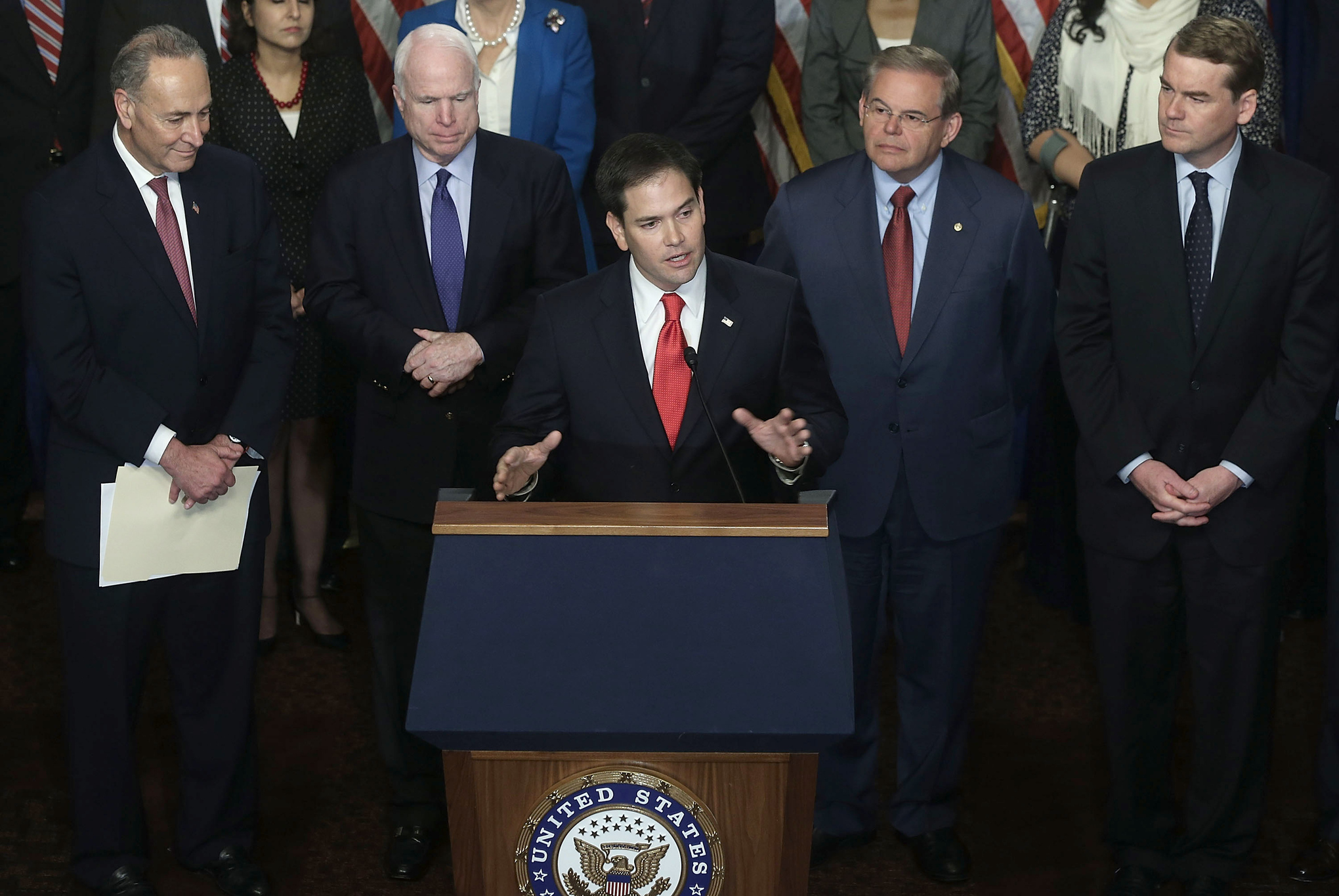 Members of the Senate's "Gang of 8". Alex Wong/Getty Images

The conservative base didn't buy it, and opposition to the bill began to spread on talk radio and among the grassroots. Glenn Beck called Rubio a "dirtbag" and "a sellout piece of garbage," and said conservatives shouldn't trust him. Soon, Sen. Ted Cruz (R-TX) called on activists to "stop this Gang of 8 immigration bill, which would give amnesty to an estimated 11 million illegal immigrants." Despite the controversy, the bill passed the Senate in June 2013 (though it had gone nowhere in the House). Rubio has never led another national primary poll since.

It's no accident that "trust" is the issue Beck focused on. As a candidate seeks to assemble a coalition that could win him the nomination, he must convince enough factions of the party that he'll use the power of the presidency wisely. "They're looking for someone they can trust, because once he's in office he can do all sorts of things," says Hans Noel, a professor of government at Georgetown University. "He has to signal to various groups that he's on their side, that he holds the core beliefs that the rest of the party holds."

Because Rubio so badly lost the trust of the conservative base on immigration, he's had to compensate by assuring them that he's on their side elsewhere. For instance, in October 2013, after the GOP's shutdown of the government over Obamacare was growing increasingly unpopular, Rubio was one of just 18 Republican senators who voted against ending the shutdown. "A lot of position-taking in Congress is about proving which team you're on," says Noel. "So Rubio was saying, 'I'm a loyal Republican who will fight against Democrats even on things where we're unlikely to win.'"

Rubio's comments on climate science should be understood as part of a similar trust-building effort. It's a twofer, appealing to business interests concerned about environmental regulation, and the party rank-and-file — only 23 percent of whom believe the earth is warming mostly because of human activity. It distinctly signals that he has no intention of working with Democrats on the issue, and prevents him from being outflanked by a more conservative candidate.

It isn't yet clear if Rubio's effort to regain conservatives' trust will be successful. But during the 2008 cycle, John McCain infuriated the GOP base on immigration, similarly plunged in the polls — and then ended up as the nominee anyway. With no clear front-runner emerging in the current field, an ongoing investigation into one contender's administration, and no clarity about whether several potentially strong candidates will even run, it would be foolish to count Rubio out.