Share All sharing options for: Study: College students are more likely to drive stoned than drunk

College freshmen could be much more likely to drive stoned than drunk. 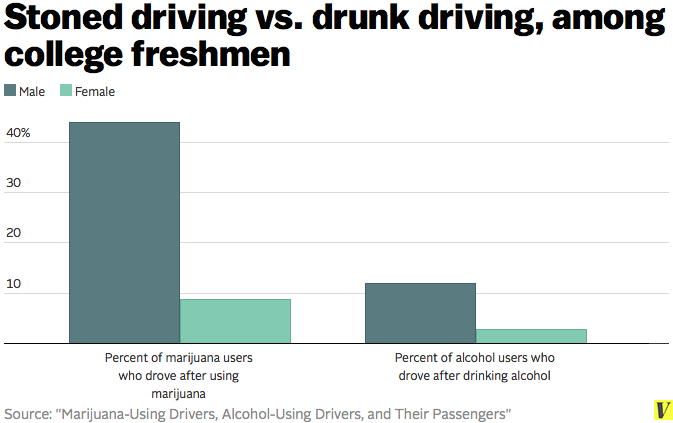 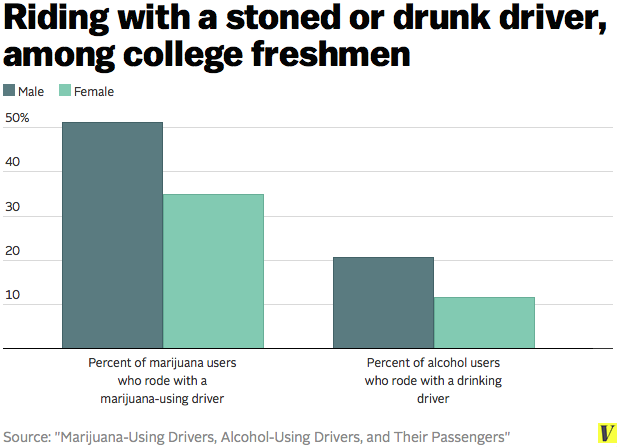 What's behind the difference?

Researchers suggest that college students in general perceive stoned driving to be safe.

The popular misconception is that, while alcohol demonstrably slows someone's reflexes, marijuana makes drivers more anxious and, therefore, more attentive to possible mistakes on the road. But the research shows that, while marijuana doesn't affect everyone in the same way, it does impair a person's ability to drive at some level.

What are some of the study's weaknesses?

For one, the study was based on a survey. It's unclear how truthful or accurate the students' responses were, even though students were told names would be kept confidential. It's possible, for example, that students were aware of the stigma surrounding drunk driving but not a similar stigma surrounding drugged driving; that could make respondents much more likely to admit to drugged driving but not drunk driving.

The study also didn't measure the time between substance use and driving, the level of impairment, or the incidence of car crashes. So it's impossible to gauge, based on the study's results, whether marijuana- or alcohol-using students were seriously impaired when they drove.

So why does this matter?

At the very least, the study strongly suggests drugged driving is more accepted than drunk driving. As public support grows and  more states move to legalize marijuana, the findings could help shape public education campaigns that typically follow legalization. The study's authors in particular called for further research into what kind of counseling and education could help bring down the rates of drugged driving as marijuana becomes more available across the country.

Correction: The headline originally misstated the rate of college freshmen who are drugged driving compared to drunk driving. This post was updated to correct the mistake and clarify the data within the story.