Who is Solange? And why is she attacking Jay Z?

Share All sharing options for: Who is Solange? And why is she attacking Jay Z?

Earlier this morning, security footage emerged showing a fight between Solange Knowles and her brother-in-law, Jay Z, last Monday. The Internet collectively freaked out in response. Here's what you need to know to understand what everyone's talking about.

Solange can refer to the French-Latin word for "solemn" or "dignified." It can also refer to a Christian saint, or a commune in France. But those definitions of the word are not what people are talking about today.

The "Solange" in the news today refers to Solange Knowles, the 27-year-old, younger sister of Beyoncé. Like her sister, Solange works as a musician but has a different sound that's more experimental than her sister's. She's perhaps best known for 2012's "Losing You":

She also did a phenomenal cover of the Dirty Projectors' "Stillness is the Move":

Solange is notable for introducing her sister and brother-in-law to indie-er, less mainstream acts. She brought them to a Grizzly Bear show in 2009, leading to this amazing video of Jay and Bey grooving out:

What is this video everyone is talking about?

During one of the Met Gala's after-parties on May 5, Beyoncé, Solange, and Jay Z, shared an elevator together. On Monday, TMZ got ahold of surveillance footage of the elevator ride which showed a fight between Solange and Jay:

Here's a GIF of the moment:

The full video shows that Solange's attack did not stop there, and she tried to kick him from across the elevator.

What happened? What caused the fight?

The surveillance does not have audio, so we don't really know.

New York's Daily News is reporting that the fight allegedly erupted because Jay had wanted to attend Rihanna's after-party. "Why can't you go home?", Solange allegedly asked Jay, who replied, "You're one to talk," which then prompted Solange's attack. Earlier in the evening, Solange had allegedly used Jay Z's name to try and get friends into the Met Ball, aggravating him. This all comes from an anonymous source, and like all anonymously-sourced celebrity reporting, it should be taken with a grain of salt.

Further, Page Six is reporting that Solange allegedly got into a small argument with designer Rachel Roy before she fought with Jay in the elevator. "Solange had too much to drink and was out of it by the time the performances started after the dinner at the Met Ball — she was dancing like a crazy person," an anonymous source said.

A lot of it has to do with Beyoncé's prominence in the universe. She was recently named one of the most influential people in the world by TIME, and possessing a sterling enough reputation that Saturday Night Live did a whole sketch premised on there being an agency whose sole purpose is punishing people who diss her:

And she recently released a whole album devoted to her relationship with Jay Z and surfborts. So she's been even more in the public eye than usual over the past year.

What did Beyoncé do?

For the most part, Beyoncé  stood still and was seemingly unfazed while this altercation was unraveling. Towards the end, she seems to separate the two and adjusts the train of her dress while her sister is being restrained:

What happened after the fight?

According to reports, Beyoncé got into a car with her sister while Jay left in a separate car. At the time, photographers didn't know a fight had taken place. This photo shows Beyoncé and Jay leaving, and Jay tucking his tuxedo back into place after being kicked out of it: 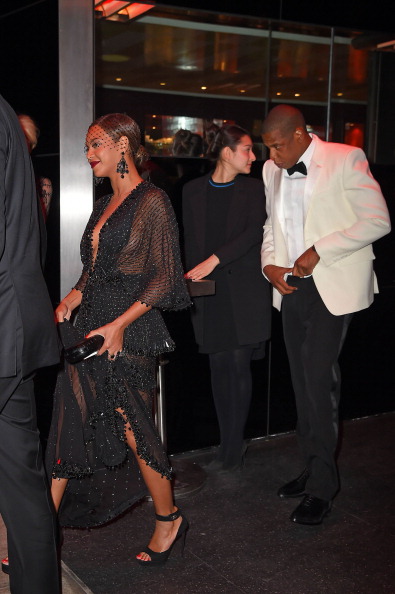 On May 10, the two were photographed at the Miami Heat-Brooklyn Nets playoff game in Brooklyn. Jake Gyllenhaal, a fellow famous person that's not as famous as these two, was also there. It looked jovial: 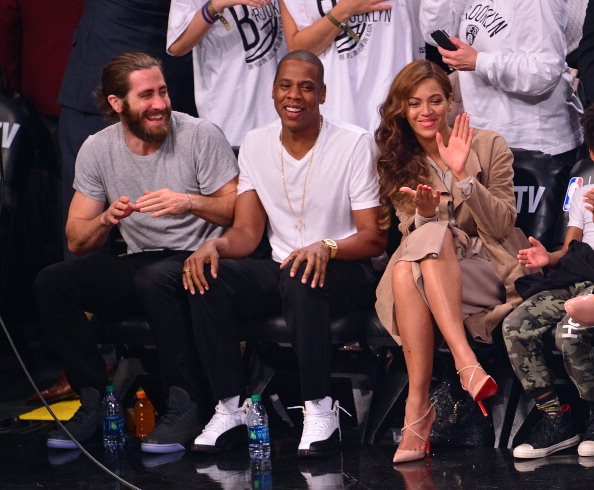 How is the world taking this?

A lot of people just want to know what spurred this fighting and are conjuring up some theories or digging through past reports of the sisters fighting, including a notable tiff over Beyoncé hanging out with Kim Kardashian (who Solange reportedly didn't think was good enough for her sister).  And, of course, people have whipped out the Photoshop:

Has Solange said or done anything since the fight?

People want and are looking for answers. And that's a little difficult with Jay, Bey, and Solange keeping mum about the incident. The Instagram deletions are the first actual activity from any of the participants since the fight went public.

Recently there's been a trend of celebrities doing things like deleting people off of social media (see: Gomez, Selena) or changing their name on social media (see: Kardashian, Khloe) instead of/ahead of speaking to the press about their personal lives. Solange's deletions could be in the same vein and hint at a rift with her sister or ... they could be completely random.

What have they said about the fight?

On Thursday, May 15, Beyoncé, Solange, and Jay released their first statement about the fight. Basically, it was Jay and Solange's fault. "Jay and Solange each assume their share of responsibility for what has occurred. They both acknowledge their role in this private matter that has played out in the public," a statement to the AP reads. It goes on to explain that the two have since apologized to one another.

Perhaps the most interesting tidbit of the statement is that the family is asserting that Solange wasn't drunk when she attacked Jay. Multiple sources had told the New York tabloids the younger Knowles sister was intoxicated and belligerent during the elevator ride.  "The reports of Solange being intoxicated or displaying erratic behavior throughout that evening are simply false," the statement reads.

The statement did not confirm or deny the reports of a Rihanna after-party or if people can begin believing in love again.

Are we going to be okay?

We'll get through this together.

A GIF from Beyonce's visual album. Via The Wire.

Update: A few readers wanted to know more about the name "Solange" and other things that "Solange" could refer to. I updated this post to reflect that. I also added sections on Solange's Instagram deletions, the Daily News's report of a cause and Page Six's reporting from earlier that evening.