Kentuckians only hate Obamacare if you call it Obamacare

Share All sharing options for: Kentuckians only hate Obamacare if you call it Obamacare

Kentucky is home to the Kynect, one of the state marketplaces that has done the best job at signing people up for health insurance coverage. And a new poll shows that the Kynect — while much less known than Obamacare — tends to elicit a much less negative reaction than the larger health care law. 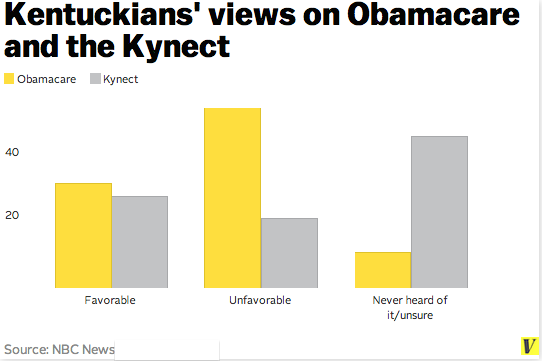 The Kynect, this poll shows, is much less known in Kentucky than Obamacare. That makes sense: while Obamacare has been the subject of a years-long political debate, only about 55,000 people (1.2 percent of Kentucky's population) are getting health insurance through the new marketplace.

The NBC poll suggests a disconnect in public perceptions of Obamacare as large, hotly-debated law and as a program that expands health insurance coverage. Shoppers on the Kynect aren't told the website is part of Obamacare. Instead, its advertised as "quality health coverage for every Kentuckian." This is true in California, where shoppers buy coverage on Covered California and in Connecticut, where the website to buy a plan is Access Health CT.

Reporters were picking up evidence of this disconnect months ago, as the Kynect went out to state fairs to try and sell Kentuckians on its new health plans. One that arguably captured it best came from Jason Cherkis at the Huffington Post:

A middle-aged man in a red golf shirt shuffles up to a small folding table with gold trim, in a booth adorned with a flotilla of helium balloons, where government workers at the Kentucky State Fair are hawking the virtues of Kynect, the state's health benefit exchange established by Obamacare.

The man is impressed. "This beats Obamacare I hope," he mutters to one of the workers.

"Do I burst his bubble?" wonders Reina Diaz-Dempsey, overseeing the operation. She doesn't. If he signs up, it's a win-win, whether he knows he's been ensnared by Obamacare or not.

As my colleague Ezra Klein has written, "Obamacare isn't an iPhone; it's not a single, carefully tended experience controlled by a central authority. It's more like the Android operating system. Obamacare powers hundreds of different health systems."

And in Kentucky, where that system is working, negative opinions on Obamacare don't seem to have fully rubbed off.