Early data shows health insurance premiums will generally go up in 2015, but most of the hikes won't be the double-digit increases some Obamacare opponents previously predicted.

Some of the first publicly available data, from Virginia, shows rate increases ranging from 3.3 percent to 14.9 percent, the Wall Street Journal reported Monday. WellPoint, for instance, filed rate increases averaging around 8.5 percent across the state.

Average premium changes for Washington, meanwhile, ranged from a 6.8 percent decrease to a 14.2 percent hike. Most listed insurers posted single-digit increases or decreases. Two new insurers, Columbia United Providers and UnitedHealthcare, also entered the market — a potential sign that the market is viewed as healthy. 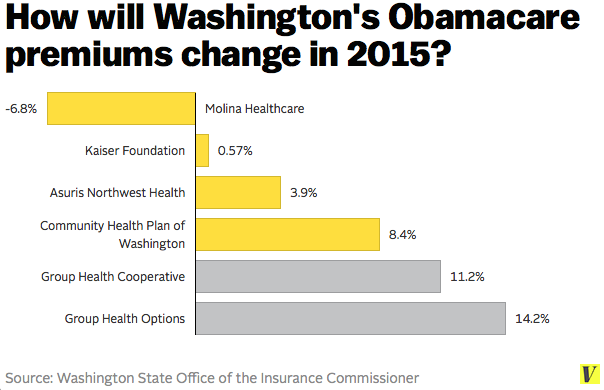 These are, however, only proposed rate changes. So the final rate changes could be even lower, since proposed premium hikes tend to come down during negotiations between regulators and insurers.

Virginia and Washington aren't necessarily representative of how premiums will change across the rest of the country. Both have done relatively well at signing up a large share of the people eligible to shop on the marketplace, suggesting they're netting some healthier enrollees.

Other states, like Hawaii and West Virginia, only signed up a small portion of those eligible for coverage. As National Journal reported, they could face serious increases after poor experiences during Obamacare's first open enrollment period.

Health insurers, for their part, have so far suggested in congressional testimony and earning calls that the demographics of Obamacare's insurance pools came in as expected, which means drastic premium changes might not be necessary.

The Congressional Budget Office projected the average premium hike will be about 6 percent each year between 2016 and 2024. How that translates at the state level remains to be seen, but Virginia and Washington might offer an early look.

Update: Added a note that these are proposed, not final, rate changes.