Late student loan payments should be becoming rarer. But they're still common.

Share All sharing options for: Late student loan payments should be becoming rarer. But they're still common.

The Obama administration has expanded programs to make it easier for student loan borrowers to pay back their loans. But the proportion of delinquent student loan debt is still stubbornly high.

A new report on the US economy from financial regulators highlights Federal Reserve data released earlier this year: In the final quarter of 2013, at least 11.5 percent of outstanding student loan debt is at least 90 days late. 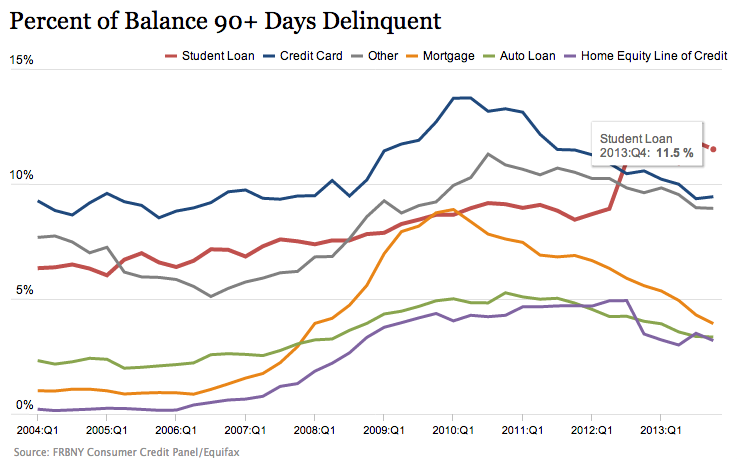 These borrowers have already damaged their credit and are on their way to defaulting on their loans. That's although the Obama administration has vastly expanded and publicized repayment programs that should make student loan payments more affordable.

The programs stretch out the repayment timeline, which is usually 10 years, and base payments on borrowers' discretionary income. If borrowers aren't making enough money, their monthly payment could be $0.

The formula isn't perfect — it doesn't take other debt into account, for example. And borrowers can still choose not to make their payments. In theory, though, the programs should reduce the number of people defaulting on their loans for financial reasons.

But relatively few people are taking advantage of them despite an outreach campaign. At the end of the fourth quarter of 2013, when the New York Fed data ends, 1.7 million people were enrolled the three repayment plans that base payments on income. That's just over 10 percent of all student loan borrowers.

So far, those income-aware repayment plans have picked up another half a million borrowers in 2014. It remains to be seen if that will be enough to drive delinquencies down.