If America really valued mothers, we wouldn’t treat them like this

A few years ago, a Mother's Day video from Cardstore.com went viral. In it, the company pretended to recruit for a seemingly impossible job. They told applicants that the job requires you to stand all day and put in 135 hours a week — or more. It means you have to work nights and weekends. There's no time off, and the hours increase around Thanksgiving, Christmas, and other holidays. The position requires skill in finance, medicine ,and food preparation. It entails intense physical labor and a total collapse in your personal life. Oh, and it pays absolutely nothing.

They called the job director of operations, but its real title, of course, is mom.

Cardstore sent the video out into the world with the hashtag #WorldsToughestJob. But here's the thing about the world's toughest job: a lot of the people doing it also hold another job, or even a few other jobs. More than two-thirds of mothers hold jobs outside the home, and mothers are the primary earners in 40 percent of families. But in America, public policy makes balancing those jobs a lot harder than it has to be.

America is, for instance, one of the only countries in the world that doesn't guarantee paid maternity leave. This map from UCLA's World Policy Analysis Center tells the tale well: our maternal leave policies make us look more like Papua New Guinea than, say, any country in Western Europe:

Of course, it would be easier for mothers to balance work inside and outside the home if fathers could spend more time parenting. But public policy is even less friendly to that prospect:

Sweden is an example of what it looks like when a country really believes that being a parent is a difficult and important job that needs to be supported by public policy. The country guarantees parents 480 paid days per child. Those days can be allocated as the parents see fit until the child is 8 years old. In order to encourage fathers to take on more parenting responsibilities, 60 of those days are specifically given to the father.

The United States, by contrast, is an example of what it look like when a country merely pays lip service to the importance of parents. While a handful of states, like California, offer modest paid maternal leave, there's no federal guarantee of either paid maternal or paternal leave. We make mothers choose between spending a month with their newborn child or keeping a roof over their child's head. That's not how it looks in countries that value the work mothers do.

The US doesn't even ensure that parents get leave they can use for child care. For instance, a lot of parents (sadly) use vacation days when they need a day off to care for a sick child. But in the US — unlike in every other developed nation — there is no guarantee of paid vacation days: 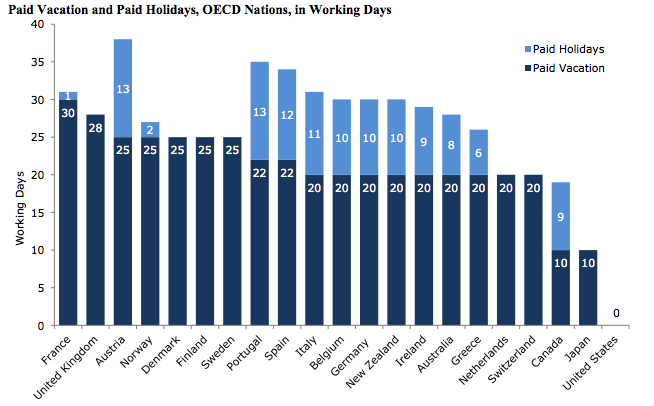 Nor, of course, is there a guarantee of paid sick days. The Center for Economic and Policy Research looked at guaranteed paid leave policies for workers who got sick with a five-day flu and a 50-day cancer treatment. The distinction was meaningless in the US, though, as both situations presented the same answer: no guarantee of paid time off at all. 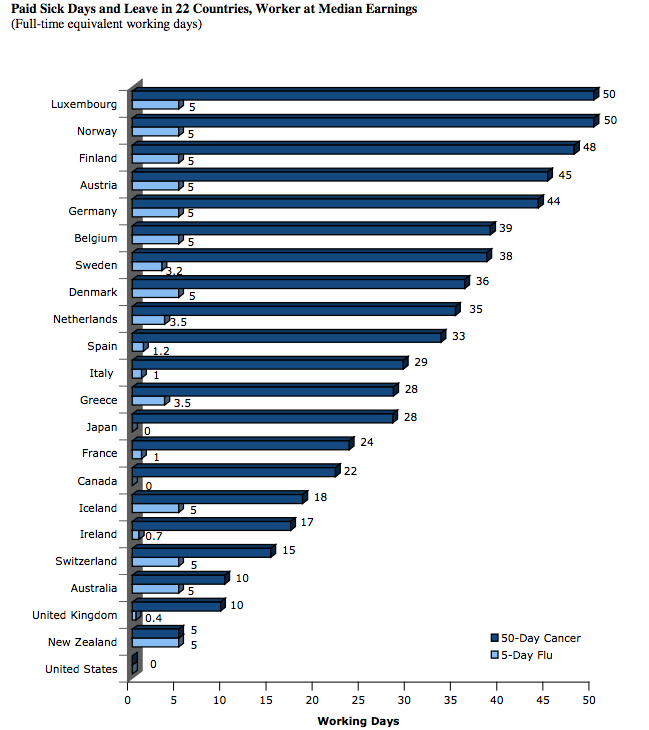 Meanwhile, mothers face constant job discrimination outside the home. After controlling for pretty much all the factors you can think of, researchers find that mothers face a 5 percent wage penalty for every child they have. The reason may be no more complicated than that they're mothers. One study asked subjects to review fictitious applicants for a job. Holding all else equal, "evaluators rated mothers as less competent and committed to paid work than non mothers, and consequently, discriminated against mothers when making hiring and salary decisions." There was no penalty against fathers.

So far, Cardstore's video has been viewed more than 25 million times. And every year, Americans celebrate a holiday to honor mothers. People know that being a mother is an incredibly hard and incredibly valuable job. But it's not a job America rewards. It's not a job public policy tries to make easier. And it is, in some cases, a job that makes it harder to get hired for, and paid fairly at, other jobs.

If we really value mothers as much as we say we do, we've got a long way to go to show it.