The amateur's guide to Godzilla

Share All sharing options for: The amateur's guide to Godzilla

Director Gareth Edwards' really great reboot of Godzilla is being released on DVD today. Before its summer release, audiences had waited 10 years since the last Japanese Godzilla flick, and 16 years since the last American film, which was directed by disaster auteur Roland Emmerich (Independence Day, The Day After Tomorrow, 2012) and met with much-deserved critical mockery.

With a tough task on his plate, Edwards delivered a, perhaps surprisingly, beautiful film that critics enjoyed and audiences went to go see.

Beneath all the carnage and spell-binding shots of destroyed cities, there's actually a story rich in history, a reflection of Japanese culture, and perhaps even a tale about single parenthood. Here's what you need to know about Godzilla before you pick up the DVD:

Godzilla is a fictional, dinosaur-like, monster that has atomic breath. Godzilla looks a bit like a tyrannosaurus rex (it has tiny arms) and its back is lined with armored plates, looking look like big bony maple leaves, similar to those on a stegosaurus. But according to the 1991 film Godzilla vs. King Ghidorah, Godzilla is actually a mutated unique species of dinosaur called Godzillasaurus.

Godzilla has appeared in 31 movies since 1954 — three America, the rest Japanese.

What does the name Godzilla mean?

Godzilla is anglicized translation of the Japanese word gojira. Gojira is actually the combination of two Japanese words: gorira, which means gorilla and kujira which means whale. So when people are screaming their heads off about Godzilla (as they do in many of these movies), they're actually saying a Japanese portmanteau of gorilla-whale.

How the powers that be decided on that name isn't entirely clear. According to Japan's Favorite Mon-star: The Unauthorized Biography of "The Big G", one of the more informative sources about Godzilla and its origins, Toho Studios, the company which made the first Godzilla film, employed a stage-hand who was just absolutely huge and was called Gojira. Director Ishiro Honda, who was behind the original Godzilla and numerous sequels, explained, "There was a big— I mean huge — fellow working in Toho's publicity department and other employees would say 'That guy's as big as a gorilla'. 'No he's almost as big as a kujira.' Over time, the two mixed and he was named 'Gojira.'"

However, that stagehand was never identified. And its unclear who that guy could be. Nevertheless, the gist is: Godzilla or Gojira was meant to mean something big and strong, like a gorilla and whale put together.

So how big is Godzilla?

Good question. The answer is it depends. Godzilla's height has fluctuated over the years, some of which is due to American and Japanese studios creating separate movies. But the 2014 version of Godzilla is the biggest yet: 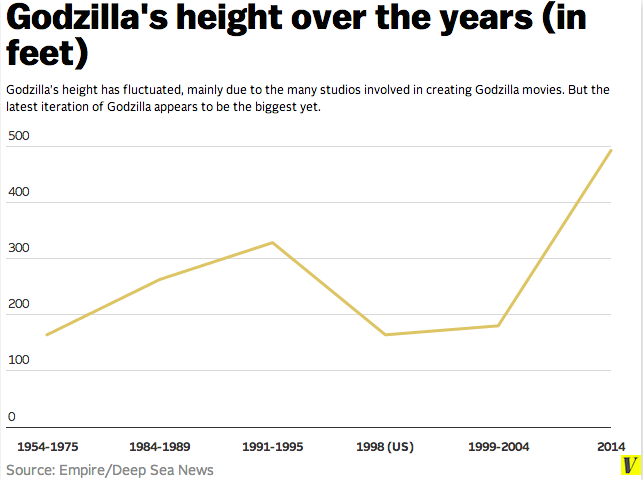 One of the major reasons for Godzilla's growth is improvements in skyscraper technology. When it's finally built, the Toranomon Hills tower in Tokyo will be the tallest in the city, at over 800 feet. That would make the 1954 Godzilla look absolutely tiny. In order to keep up with an ever-rising skyline, filmmakers have had to make Godzilla bigger so he/she remains equally menacing.

Have there been any major changes to Godzilla since the 50s?

Godzilla's signature trait is its high-pitched roar. And that's changed throughout the years. If you listen closely, you'll notice a big difference between the Japanese versions and the U.S. versions (2014 in particular) Godzilla:

The creature's look has also varied a lot. Godzilla was originally played by a guy named Haruo Nakajima who wore a zip-up suit. Because Godzilla was played by an actual human, Godzilla didn't look as menacing (and was actually sorta cute) in the first Japanese versions. Godzilla also displayed some human gestures like this one (which looks kinda like a thumbs up or a "go long"):

In American studios' hands, Godzilla is more CGI'd and given a more menacing look:

Is Godzilla a he or a she?

Godzilla's gender is undetermined. In Japanese films, Godzilla has traditionally been depicted as an "it" and the English subtitles of those films have skewed toward male pronouns. What makes it more complicated is that there are Japanese movies which depict a son of Godzilla, and Godzilla being kind of an abusive father/mother, but there are never any Godzilla mates in any Godzilla film. Ergo, there's a possibility that Godzilla is female and laid eggs and found a love before the first film. Or, Godzilla could be a male who can carry eggs, much like a seahorse.

Toho insiders are equally unsure. "As to the gender of Godzilla, I do not know!" Haruo Nakajima, the man who wore the Godzilla suit from 1954-1972, said in 2004. In US films, like the 1956 film Godzilla: King of the Monsters, the pronouns used to describe Godzilla have usually been male.  There have been twists though. The lizard in the 1998 Godzilla reproduced asexually and laid eggs.

You've mentioned the differences between the Japanese and American versions of Godzilla. What gives?

One of the things you have to take into consideration is the symbolism, allegory and nuance that Godzilla has in Japan (and Asia) that gets lost in translation. In the early Japanese versions of Godzilla, the monster was a metaphor for nuclear weapons. Godzilla is by-product of H-bomb testing, and was living peacefully in the ocean until the tests irradiated him (or her).

On a more critical level, a major theme of the films is that Godzilla/nuclear weapons can't be controlled. At their best, nukes/Godzilla are a last resort, only to be used when they represent the lesser of two evils (i.e. when Godzilla fights a different monster).

That symbolism was scrubbed from the first American version. "The Americanized Godzilla, which removed about 40 minutes from the Japanese original ... did its darnedest to minimize the nuclear theme. A lot of the Japanese characters' explicit references to the bomb were jettisoned," The New York Times's Terrence Rafferty wrote in 2004.

The series was also just more popular in Japan, leading to more sequels and a more involved fictional universe than the one present in American versions of the story. American audiences never really got into or were exposed to the Godzilla lore and mythology, and missed out on creatures like Mothra, Rodan, Mechagodzilla, and King Ghidorah. Japanese audiences got to see movie after movie featuring Godzilla fighting these monsters (or kaiju, the generic Japanese term for giant monsters of this variety).

A GIF from the 1964 movie Mothra vs. Godzilla (or Godzilla vs. The Thing in the US)

That's part of the reason the official trailer for the 2014 film and the trailer shown in Asia are very different. The American version promises a disaster movie, while the Japanese version touts monster fights more than it does the destruction the monsters cause to cities.

Can you break down some of Godzilla's enemies?

Mothra (first Godzilla appearance: 1964) is one of Godzilla's more popular enemies. It's a giant, beautiful moth armed with lethal pollen and wings that produce hurricane-like winds. In later iterations, it also can produce an energy beam of some kind. Mothra is summoned into battle by two twins, and in some stories represents a being that restores order to the world. It also has an evil form called "Battra." Mothra sometimes teams up with Godzilla to fight a greater evil.

Rodan (first Godzilla appearance: 1964) is a pre-historic pterosaur or pteranodon who actually had its own movie series prior to Godzilla. Its main weapons are its flying speed, generating wind blasts and sonic booms, and a chest peppered with spikes. Like Mothra, these powers kinda pale in comparison to Godzilla. Rodan's first appearance in a Godzilla flick is in Ghidorah, the Three-headed Monster, where it teams up with Godzilla and Mothra to take out Ghidorah.

Godzilla and Rodan teaming up in Ghidrah (sometimes spelled Ghidorah), the Three-Headed Monster

Ghidorah/Ghidrah (first appearance: 1964). While other monsters seem to change loyalties and eventually team up with Godzilla, Ghidorah is pretty much always the bad guy. This was due to a shift in Godzilla's narrative, where the lizard was portrayed as a good guy. In order to make Godzilla more "good", Toho needed a bad guy, and a three-headed dragon who shoots lasers from its mouth was a good place to start:

Ghidrah (getting his lunch eaten) in Godzilla: Destroy all Monsters

Those would probably be the three A-listers in the Godzilla universe. But they're not the only monsters that Godzilla has fought. For a more comprehensive list of Godzilla's monsters (kaiju), check out this comprehensive guide.

Tell me more about Godzilla's kid.

Perhaps the weirdest difference between the two countries' Godzillas is this creepy looking guy, Godzilla's son:

That strange lump of a creature is named Minilla, and is actually a peaceful, non-threatening, atomic-breathing dinosaur.  Minilla kinda captures the cute (kawaii in Japanese) side of Godzilla flicks, but also demonstrates how built out the mythology is in Japan, where Godzilla has developed enough as a character that he/she is now a frustrated single parent with a helpless kid.

So what do Japanese audiences think of the new American remake?

Some hardcore Godzilla fans aren't too happy, and there have been criticisms in Japan that the new Godzilla is just too big, too gigantic, and maybe too American. There have been criticisms that the CGI is overdone.  "American Godzilla is just a giant iguana freaking out," one fan told the Associated Press. "I hope the day will come when a Japanese director can make a Godzilla movie again for the world," another added.

Which Godzilla movies should I watch?

Full disclosure: I am a Mothra fan, so my completely biased pick would be Mothra vs. Godzilla (1964).  However, I completely understand if a flying butterfly with lethal pollen is not everyone's cup of tea.

The good news is that Netflix subscribers will have a whole bevy of Godzilla flicks to choose from. The company added five crucial Godzilla movies — Godzilla, King of the Monsters, Godzilla vs. Monster Zero, Mothra vs. Godzilla, Godzilla's Revenge, and Godzilla Raids Again— to its streaming service on May 1. On YouTube, James Rolfe's Godzillathon series is a pretty funny and sardonic breakdown of all of the films.

There's also this handy guide, posted by one intrepid Godzilla fan, which highlights the must-see movies: