How Massachusetts screwed up Obamacare

Share All sharing options for: How Massachusetts screwed up Obamacare

Massachusetts pioneered universal health care in 2006. Under then-Governor Mitt Romney, it was the first state to guarantee access to insurance — and drove its uninsured rate down to just 4 percent.

Which makes it baffling that Massachusetts did arguably the worst of any state in implementing Obamacare. Like a handful of ardent Obamacare supporters in other states, Massachusetts officials tried to pull off an ambitious launch — and failed badly.

"It was a management failure," says Don Berwick, who previously oversaw health law implementation for the Obama administration and is currently a candidate for Massachusetts governor. "Like the federal system, the state should have thrown the best IT support into it."

Massachusetts decided last week to scrap the exchange it spent more than $175 million in taxpayer dollars to build. It has hundreds of thousands of Bay Staters in temporary insurance policies, placeholders for consumers who couldn't buy insurance online.

The state is now in talks with the Obama administration about what a transition to healthcare.gov would look like — and is also exploring whether it can work with a different technology vendor to build a new site.  "There aren't a lot of options," says Sarah Iselin, a special assistant to Massachusetts Governor Deval Patrick, who was brought on in February to help with the health overhaul. "We unfortunately didn't get it right."

'they rank the worst in the country. there's nobody worse.'

This was not Massachusetts' plan. The state spent years trying to build what they hoped would be the country's most advanced marketplace. What got in their way, state officials and outside experts say, were poor management, a too-ambitious agenda, and a failed relationship with its main technology vendor, CGI — the same company that managed the failed launch of healthcare.gov.

Massachusetts' prior experience running an exchange may have turned into a distinct disadvantage, some say: it led the state to underestimate how different — and challenging — building an Obamacare exchange would be.

"They had a website up and running and there might have been some thinking like, 'How much more difficult can this be?'" says John McDonough, a Harvard professor who worked on both the Massachusetts and federal reform laws. (He is not affiliated with the Connector.) "It was a bigger leap from the pre-ACA site to the ACA site and some people might have underestimated the challenge."

'It's harder to rehab your house when you're still living it' 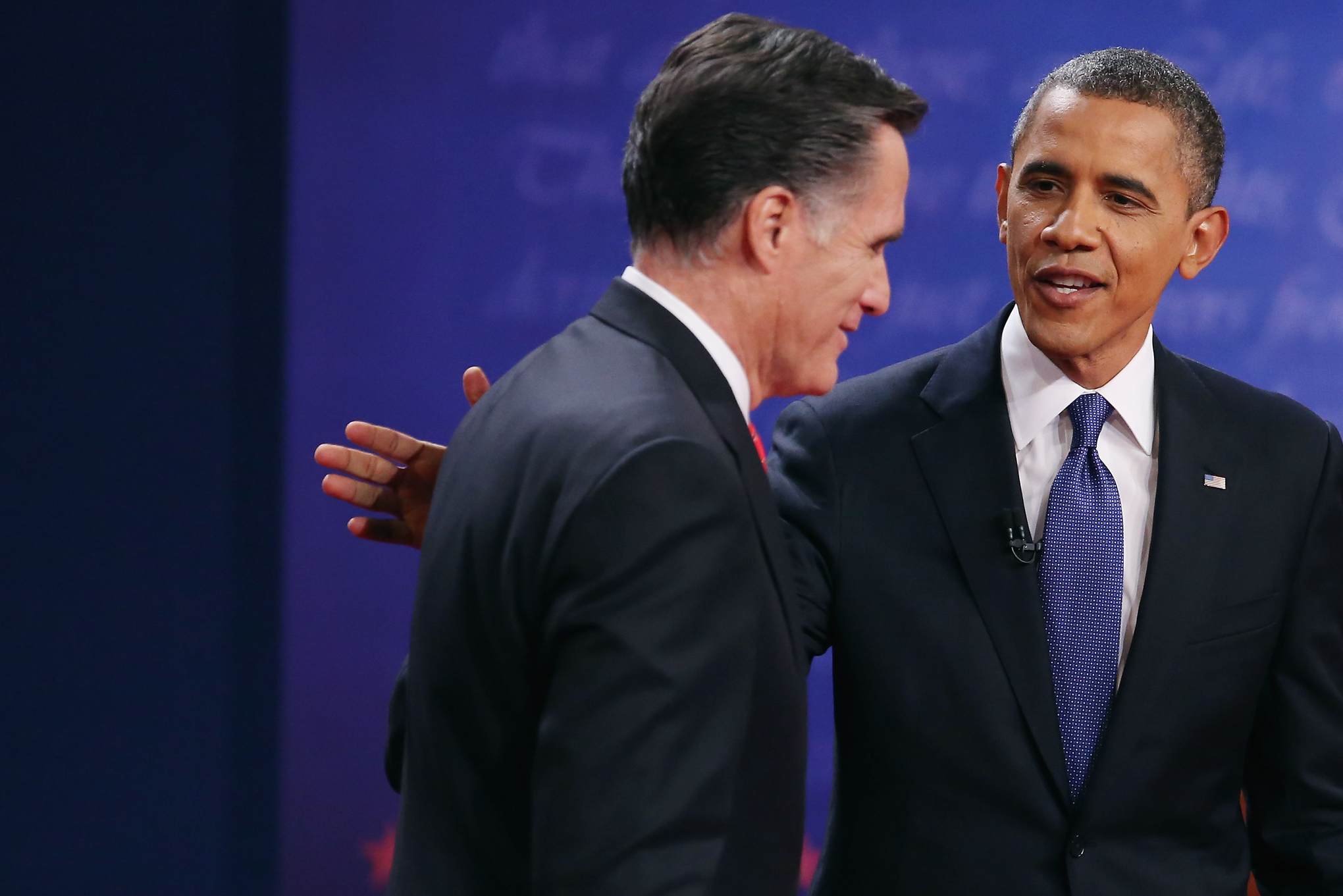 Massachusetts' health care law and the Affordable Care Act are, policy-wise, quite similar. But technologically, the two programs are light years apart.

Both laws rely on a three crucial policies to expand private insurance coverage.

The first is opening the individual insurance market to everybody, no longer letting insurers turn away customers because they have a costly health condition. The second is a requirement for everyone to buy insurance — the individual mandate — which is a tool to ensure that both sick and healthy people enter the newly expanded market.

The last prong is financial help for middle- and low-income Americans: if the government is going to require people to buy a health plan, it needs to use subsidies to make it affordable.

The Obama administration largely cribbed these ideas from Massachusetts when it passed the Affordable Care Act in 2010. But it did not stick with Massachusetts' barebones way of having people shop for their health insurance plans in the newly reformed market.

After Massachusetts passed its health insurance reforms in 2006, the state set up a basic website called the Health Connector. There, shoppers could compare plans online, but if they wanted insurance subsidies they had to submit a paper application that workers would key in by hand.

Under Obamacare, that manual experience doesn't fly. Federal regulations require that shoppers be able to find out in real-time whether they qualify for subsidized health insurance, and go on to purchase a plan.

Massachusetts needed to toss out the paper applications it had used for years. This turned out to be more difficult than it sounds.

"In some ways it's harder to rehab your house when you're still living it," Jon Kingsdale, the Connector's first executive director, says.

'We shot for the moon and we missed'

After pioneering universal coverage in 2006, Massachusetts was quick to embrace the Affordable Care Act. It was among the seven states that the Obama administration awarded an "early innovator" grant, to develop models for the new, all-digital marketplace that other states could replicate.

Massachusetts' wanted to build a more complex marketplace than other states were attempting.  For example: the state's health reform law gives residents more generous subsidies to buy health insurance than the federal law. So officials decided the state should keep paying more, using its own state funding. That meant Massachusetts was layering on another level of financing — and another level of complexity.

"We shot for the moon, and we missed," M.I.T. health economist Jon Gruber, who is a member of the Health Connector's board of directors, says.

There were three agencies working on the launching the new exchange: MassHealth (the state Medicaid program), the Connector, and Massachusetts Medical School. One audit report from December 2012, which showed the project already behind schedule, cited "inefficient communication" between those three agencies as one reason for the delays.

"There wasn't a single point of management," Gruber says. "It was poorly set up and it was this horrible combination where the contractor would get different orders, and would do none of them."

The last challenge was a rocky relationship between Massachusetts and its lead technology vendor, CGI. But CGI also worked on the launch of two successful state exchanges — Kentucky and Colorado — and there are disparate views on why the Massachusetts project was unsuccessful.

Some argue that CGI failed to follow through on demands from the state, promising to fix problems but never delivering.

"We had the wrong vendor partner...and that wrong partner failed us, leaving us where we are today," Iselin says.

Others put more blame on the state agencies, which made numerous changes to the what they wanted CGI to build. According to one source familiar with the project, the three Massachusetts' agencies requested more than 400 changes to its scope over the course of the contract.

Either way, by last summer it was becoming clear that the Massachusetts Connector wasn't going to be ready for relaunch on October 1, the day it needed to be compliant with Obamacare.

Jay Himmelstein, a professor at the University of Massachusetts Medical School, raised this concern in a July 2013 memo to CGI's leadership. "It has become increasingly apparent that code development, testing and delivery...may not be completed by the first go live date of October 1, 2013," he wrote.

'Screens were disappearing, information wasn't there'

On October 1, the Health Connector relaunched as an Obamacare-compliant marketplace. It looked a lot like healthcare.gov: completely dysfunctional.

Shoppers who wanted to buy health insurance with a subsidy — including those attempting to renew plans they had purchased on the Connector in 2013 — couldn't complete the shopping process.

"Screens were disappearing, information wasn't there, people thought they had submitted an application but it actually hadn't gone through," says Amy Whitcomb Slemmer, who runs the consumer group Massachusetts Health Care for All.

The federal government largely fixed healthcare.gov's technological problems by December. But the Massachusetts Connector still wasn't working — and, into 2014, there was a backlog of nearly 75,000 paper and digital applications still waiting to be processed.

'We need to figure out what we can realistically implement' 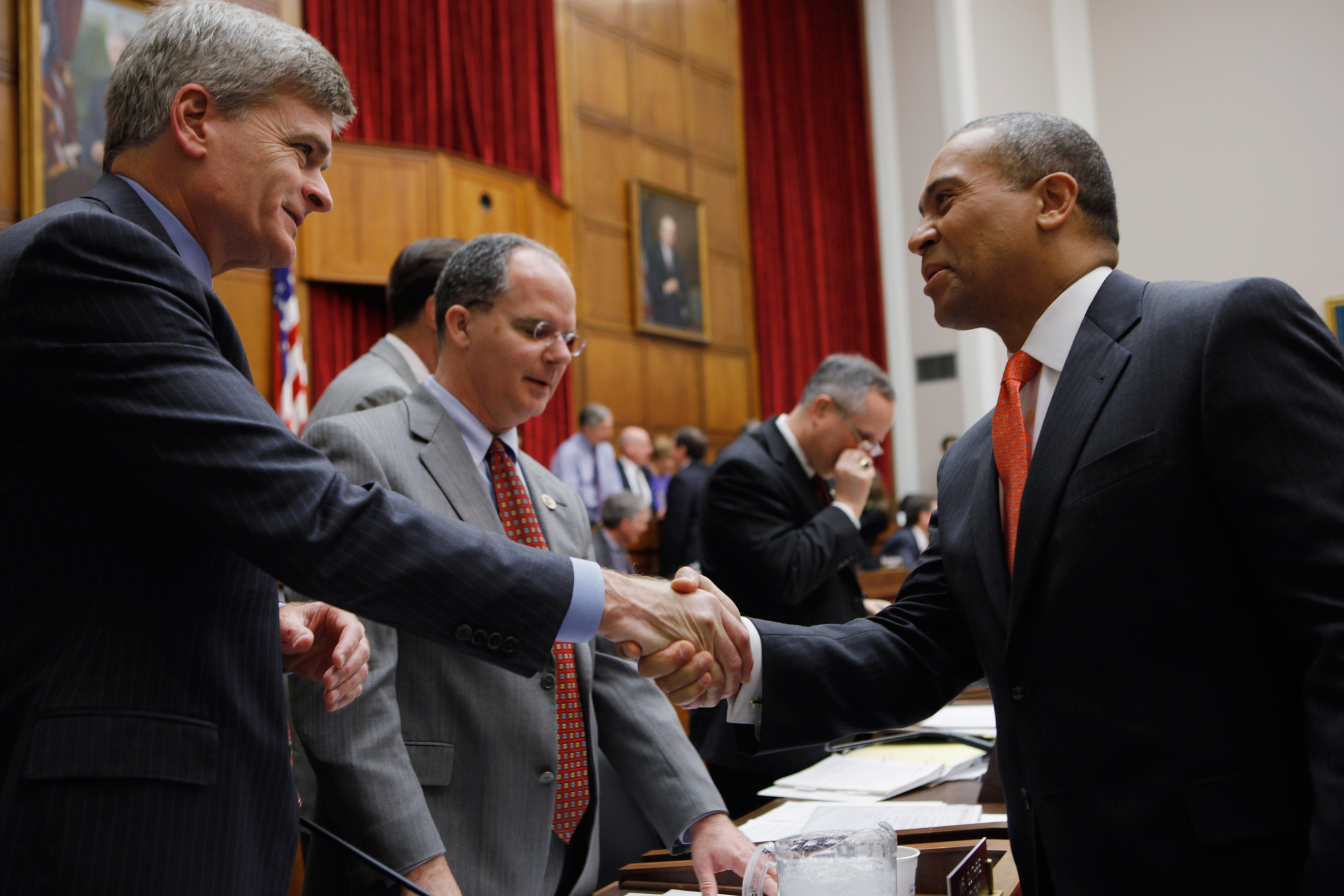 Massachusetts now ranks 49th in the country in the percent of people eligible to use the exchange who have enrolled, only beating out South Dakota and Iowa. 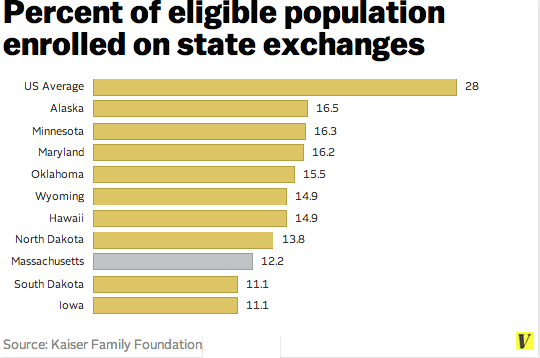 One key reason Massachusetts has low enrollment is that it has hundreds of thousands of residents on transitional coverage: short-term programs run by either private insurers or the state. These are bridge programs for people who ran into technological difficulties purchasing coverage, and Massachusetts is the only state using them.

"We've done the problem-solving for most people," says Whitcomb Slemer, of Health Care for All, in an interview on May 8. "To my knowledge, as of last night, we don't have any outstanding cases of people waiting to get signed up or get care."

Massachusetts announced in mid-March that it would "transition" away from its relationship with CGI. In a statement, CGI said it was still doing support work on the Connector.

"After successfully launching systems in other states, CGI continues to deliver critical capabilities and functionality for the Connector," says Linda Odorisio, CGI's vice president of global communications.  "At the same time, we stand ready to leverage this experience in support of Massachusetts' latest deployment plan."

The state is now exploring whether it can work with a different technology vendor called hCentive to build a new site or whether it will transition to healthcare.gov. Massachusetts estimates that the new exchange will cost $121 million — and none of the options on the table, Iselin says, are perfect.

"There's a compressed timeline because the next open enrollment starts November 15, and that's not a date we can move," she says. "We need to figure out what we can realistically implement and what will provide the best value."

Massachusetts was unique in that it was transitioning from a pre-existing health care marketplace to a new one. But the challenges it faced, some outside experts say, did show up in other states that also pursued ambitious health reform agendas. Oregon, which recently defaulted to the federal exchange, was a firm supporter of the health care law, as was Maryland, which has also had to scrap its state marketplace.

"The states that ran into the biggest trouble had the grandest ambitions," Harvard's McDonough says. "In hindsight, that looks like the wrong strategy."