Boko Haram's kidnapping of 276 girls and its aftermath, explained

Share All sharing options for: Boko Haram's kidnapping of 276 girls and its aftermath, explained

In April 2014, the Islamist militant group Boko Haram kidnapped 276 girls from the village of Chibok, an act that stunned the world and catalyzed a domestic and international campaign for their return. Though 57 managed to escape, 219 of the girls are still missing.

Why were 276 girls kidnapped in Nigeria?

In April 2014, a group of Islamist militants attacked a school in Chibok, a settlement in the northern Nigerian state of Borno. The militants, members of a particularly brutal group called Boko Haram, kidnapped 276 girls. Though some have since escaped, 219 girls still remained in Boko Haram's clutches a year later.

Boko Haram, a Nigerian militant group whose name is most accurately translated as "Western culture is Islamically forbidden," despises the idea of educating girls. It has waged a brutal insurgency from its base in northeastern Nigeria and several surrounding nations with the goal of imposing strict Islamic law in Nigeria, the population of which is roughly half Muslim and half Christian.

This kidnapping furthered Boko Haram's ideological goals, but may also have been a ploy to raise money or simply acquire slaves. Boko Haram's leader, Abubakar Shekau, had threatened to sell the girls into slavery, and a year later it still wasn't clear where they were.

After the kidnapping, Nigerian activists turned the girls' plight into a global concern. Infuriated by President Goodluck Jonathan's inability to rescue the abducted girls, Nigerians organized protests and a social media campaign (including #BringBackOurGirls on Twitter) to try to spark some kind of positive action.

How could Islamists kidnap hundreds of girls and get away with it?

Basically, because the Nigerian group responsible for taking them, Boko Haram, is an armed insurgency that the government can't defeat.

Boko Haram is a scattered group, operating in Nigeria's Borno, Yobe, Adamawa, and Bauchi states, in the country's northeast. It also has bases in neighboring Cameroon, Chad, and Niger. Here's a map of Nigeria and surrounding states for context: 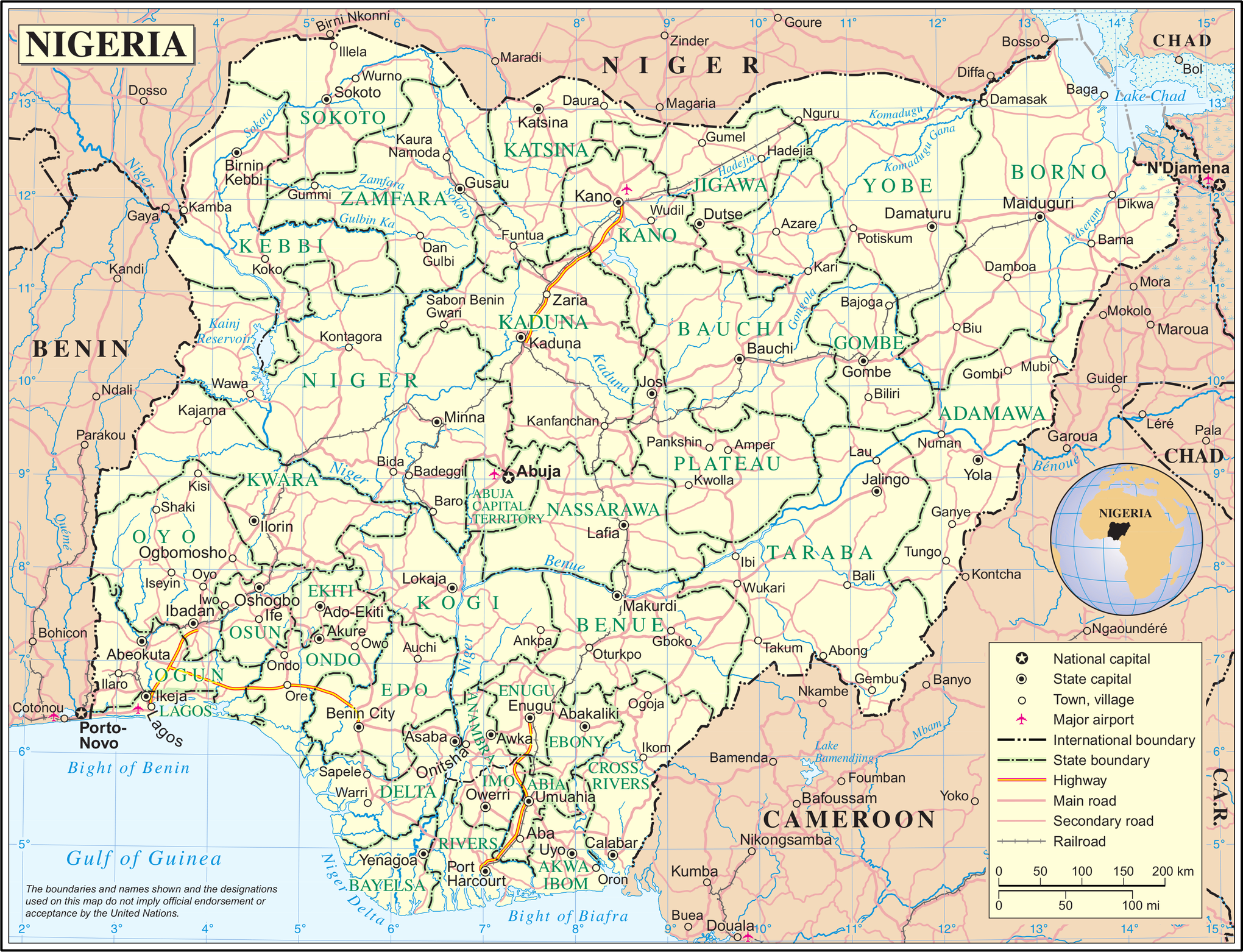 Because of porous borders and weak governance in northeastern Nigeria, Boko Haram has so far been almost impossible to stamp out. The Nigerian government's inability to provide basic social services has helped to create an unstable environment in Borno, one where people were open to Boko Haram's radical Islamist criticism of the central government. The group has lost popular support as it has become increasingly violent in the past several years, but the general instability created by an under-resourced government has allowed the group to flourish regardless.

The central government has waged an aggressive military campaign against the group, but has failed to eliminate its leadership or power base. Absent better governance and border control in northeast Nigeria, it's unclear how the government could ever eliminate the instability that fuels Boko Haram.

Hence why the girls weren't found. Boko Haram is spread out throughout northeast Nigeria and can easily jump national borders. They're an elusive, militarily capable group with a deep power base.

What did Boko Haram do with the captured girls?

A year after the kidnappings, it still wasn't clear. Though early speculation suggested they might ransom the Chibok girls back to the government, that didn't happened. It was believed that the girls might have been made into slaves, forced to serve either Boko Haram or sold to someone else by the group.

Boko Haram had kidnapped girls and women before, and has done so again since the Chibok attack. In 2011 and 2012, the Nigerian central government detained wives and female relatives of Boko Haram fighters to pressure the group. Boko Haram threatened to retaliate against other civilian Nigerian women. They made good on their threat for the first time in 2013. These kidnappings escalated in 2014. Between 2014 and May 2015, Boko Haram kidnapped about 2,000 Nigerian girls and women.

Many Boko Haram kidnappings, either of girls or other individuals, had been designed to extract ransoms. These ransoms come in the form of various demands ranging from cash to the release of captured Boko Haram militants from prison.

According to a video made public in May 2014, Abubakar Shekau, the group's leader, demanded an unspecified number of Boko Haram prisoners held by the Nigerian government, possibly all of them, be released in exchange for the girls' freedom. That didn't end up happening.

Before this video, Shekau threatened to sell the girls into slavery, chillingly promising that "by Allah, I will sell them in the marketplace."

Shekau's threat wasn't idle. Unverified reports suggested that several of the children had been sold to Boko Haram fighters as "brides" for around $12. West Africa has one of the world's largest per capita concentrations of enslaved people; there are human trafficking routes that extend into Niger and Cameroon (the latter of which isn't in West Africa), countries to which Boko Haram has easy access. A lot of the people trafficked in and around Nigeria are children. 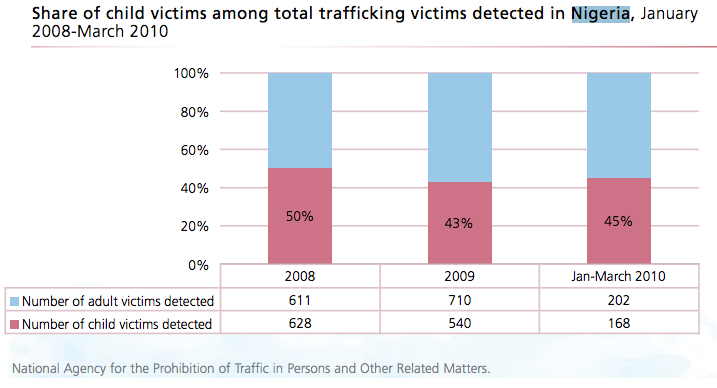 The fact that the girls weren't ransomed doesn't mean that ransom profit wasn't, at least initially, a motivation for the kidnapping. It's possible that Shekau could have been implicitly threatening to enslave the girls if his ransom demands weren't met: give us everything we want, or the girls suffer a miserable fate. It's a negotiating tactic the group used before, when it abducted the wives of 12 relatives of police officers. Since no ransom agreement was met

What did the Nigerian government do to rescue the girls?

That was a subject of much dispute in 2014. At the time, the government claimed to be working hard to find the girls, but the family of the girls and local activists didn't really believe them. The perception that President Goodluck Jonathan was indifferent to the girls' plight was a serious political problem for him, and arguably contributed to his 2015 electoral defeat.

Jonathan didn't speak about the Chibok abduction for roughly three weeks after it happened. When he did, on May 5th, he denied that negotiations were ongoing, but promised to get the girls back. He set up a committee to plan a strategy for rescuing the girls, and believed, according the AP, that current military efforts would find them. On May 7, the Nigerian police offered a $312,000 reward for any useful information about the girls.

Immediately after the kidnapping, it didn't appear that the government was doing very much — causing Nigerians to protest en masse to put pressure on Jonathan to do more.

"We have a national leader who is supposed to champion the protection of the entire country," said Aishatu Ngulde, a member of Baobab for Women's Human Rights, told Voice of America. "But since this thing happened, we have never had our president tell the entire nation that he is deploying our air force with their jets."

The Jonathan government didn't have a great record on human rights and civilian protection. In 2013, the president declared a state of emergency in Borno, Yobe, and Adawama states and cracked down on Boko Haram activities. It didn't stamp out the group, and, according to Human Rights Watch, the security forces "engaged in the indiscriminate arrest, detention, torture, and extra-judicial killing of those suspected to be supporters or members of the Islamist group."

What did the United States do to help find the girls?

The US deployed a military and law enforcement contingent to support the Nigerian government's effort. They did not directly engage Boko Haram forces.

On May 6, 2014, the United States announced that it would send 200 military and law enforcement personnel to help advise in the search for the kidnapped girls. According to State Department spokeswoman Jen Psaki, the US deployment consisted of a "coordination cell" that can contribute to and coordinate the search for the girls.

Some American resources were still deployed to Nigeria as of April 2015, but they hadn't been involved in fighting. The deployment was less extensive than the one sent to the to-date also unsuccessful US contingent tasked with helping Uganda capture warlord Joseph Kony.

Why were Nigerian activists angry at the country's First Lady over the kidnapping?

Patience Jonathan, President Goodluck Jonathan's wife, allegedly ordered the arrest of two leaders of the protest movement demanding that the government do more to bring the girls back. Her actions further inflamed Nigerians against their government and its poor handling of the crisis.

According to Human Rights Watch's Mausi Segun, the order of events was as follows. Saratu Angus Ndirpaya and Naomi Mutah Nyadar, two women who hail from Chibok, organized protests against government inaction in the capital of Abuja. On the night of May 4th, 2014, they had an all-night meeting with the first lady. Allegedly, Mrs. Jonathan accused the women of being agents of Boko Haram attempting to undermine her husband's administration. Both women were detained on May 5th, but have since been released, though Nyadar was detained for some time.

According to Ndirpaya, the First Lady even said at one point that the kidnappings were fabricated to make the administration look bad. These arrests, together with the below video of Mrs. Jonathan crying over the Borno government's handling of the crisis, turned her into a lightning rod for criticism of the administration's handling of the abduction:

Nigerian campaigners used social media, particularly Twitter, to raise awareness about the kidnapping. The campaign appeared to play a major role in galvanizing international interest in the girls' abduction.

#BringBackOurGirls didn't really take off internationally until April 30th, 2014 when the first reports of the girls being sold to Boko Haram fighters broke. Here's a chart of uses of the hashtag on Twitter from that time:

In early May, the campaign took off across social media platforms, with #BringBackOurGirls being mentioned by Hillary Clinton and a number of prominent celebrities. While its actual use as a hashtag has died off as attention to the kidnapping waned, #BringBackOurGirls remains an internationally recognizable term for the girls' abduction and the campaign to bring them back.