Scientists find switch for people to control their dreams

Share All sharing options for: Scientists find switch for people to control their dreams

Have you ever had a dream where you realized you were dreaming? The technical term is a lucid dream. And people who are lucky enough to have them can often control the dreams, as well. This week, researchers showed for the first time that they could use electrical stimulation to switch lucid dreaming on.

The implications are intriguing. The study suggests that someday ordinary people might be able to produce lucid dreams using an electrical device. It provides a new way to study consciousness. And it also indicates possible therapies for mental health problems, including the recurring nightmares common in post-traumatic stress disorder (PTSD).

"This is a major contribution to consciousness research," Thomas Metzinger, a philosopher based at Johannes Gutenberg University of Mainz, Germany, told me over the phone. He has dealt extensively with aspects of consciousness and self-awareness from a philosophical perspective.

He also noted that the change from non-lucid to lucid dreaming is similar to snapping back to attention after daydreaming. So the study might be able to help our understanding of waking life, as well.

For decades, people have been manipulating the brain using chemical means — drugs. But in recent years, researchers have begun to use electricity, as well. For example, there's FDA-approved electrical brain implant that treats tremors associated with Parkinson's disease.

The new dream study, which was published May 11 in Nature Neuroscience, used a far less invasive method: electrodes temporarily placed at strategic locations on the scalp. The research involved 24 volunteers with no history of lucid dreaming. The subjects went to sleep and eventually dreamed. Then, researchers turned on a 30-second-long electrical signal and then woke them up and asked them about their experiences. It turned out that a 40 Hz stimulation induced lucid dreams 77 percent of the time.

You can't objectively measure a dream, though. So how did researchers know that the subjects weren't just making it up? For one, the electrical stimulation was gentle enough that people couldn't feel it, and some people were in a control group that had electrodes that never got turned on. Also, the study was double-blind: neither the volunteers nor the people who interviewed them were told who had what kind of stimulation. So it does seem that the effects were real. 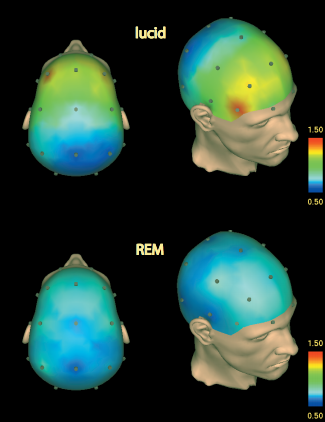 In addition, there was an objective measurement of the subjects' own brain activity. Researchers purposefully were stimulating subjects' brains at around 40 Hz because this frequency had already been associated with higher-order brain functions such as self-awareness. The subjects' own brains then resonated with this frequency, producing it themselves. And the signal was stronger during lucid dreams than non-lucid dreams.

Although lead researcher Ursula Voss, of Goethe-University Frankfurt, Germany, told me that they haven't seen any side effects from the stimulation, there isn't enough data to completely know for sure. So absolutely do not try this at home. The potential risks of messing with the brain's electrical activity could include seizures, memory problems, and who knows what else.

If you really want to attempt lucid dreaming, previous studies have shown that some people can be trained to do it. The simple technique? Before sleep, remind yourself to recognize dreams by how bizarre they are.