Share All sharing options for: Should Obamacare let employers not provide insurance?

Killing Obamacare's employer mandate would reduce the number of non-elderly Americans who have health insurance by 0.07 percent, a new paper from a liberal think tank suggests.

The Urban Institute published new research Friday suggesting that completely eliminating the requirement that all large businesses offer insurance coverage to their workers — a requirement already delayed until 2015 — would reduce the number of Americans with coverage from 251.1 million to 250.9 million in 2016. That works out to a difference of 200,000 people — or 0.07 percent.

The changes are small enough that they barely show up in a chart. 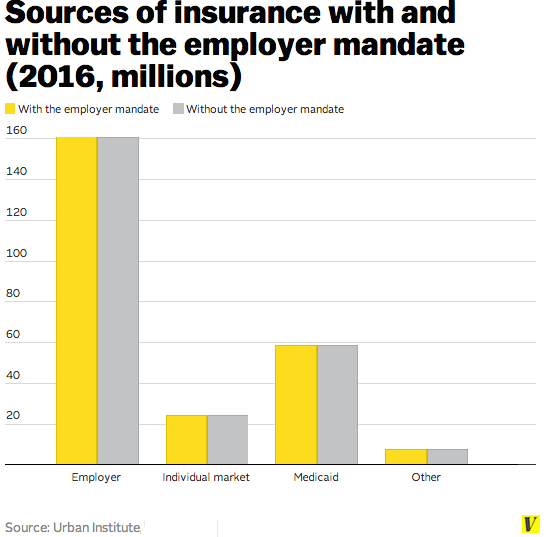 One big reason that Urban Institute doesn't expect insurance coverage to plummet if the employer mandate disappeared is that the vast majority of employers already offered insurance before there was any requirement to do so. They've done so for a couple of reasons, one large one being that companies don't have to pay taxes on health insurance. This makes it a much cheaper way to provide compensation to workers than salary.

"The alternative would be giving individuals a higher salary, which would be taxable income, and those workers would then have to purchase coverage in the individual market," Urban's report concludes.

Since Obamacare started, there have been a few high-profile cases of companies shifting some people to the exchanges, most notably Trader Joe's with part-time workers and UPS with spouses. There hasn't been any major company yet to shift their full-time workers into the marketplaces rather than provide a health plan.

That could happen in 2015, when the employer mandate kicks in. But the lengthy history of employer-sponsored insurance will likely make most large companies hesitant to drop coverage quickly.

While Urban's Institute suggest that a future without an employer mandate wouldn't be very different, actually taking that policy out of the law is a big lift. The mandate was delayed because the White House said it proved too complicated to implement during Obamacare's first year. But eliminating it outright would likely require Congress passing — and Obama signing — a law that took the requirement off the books. And that, given Congress' current track record on working together on Obamacare, isn't likely to happen any time soon.