Carbon-dioxide levels haven't been this high in at least 800,000 years

Share All sharing options for: Carbon-dioxide levels haven't been this high in at least 800,000 years

CO2 remained above 400 parts per million for a whole month

Since 1958, the Mauna Loa Observatory in Hawaii has tracked the rise of carbon dioxide in the atmosphere — the simplest measure of how humans are altering the Earth and warming the planet.

This "Keeling Curve" reached a new milestone in April: the amount of carbon dioxide in the atmosphere remained above 400 parts per million for the entire month (an average of 401.25 ppm). That's the first time that's happened in recorded history: 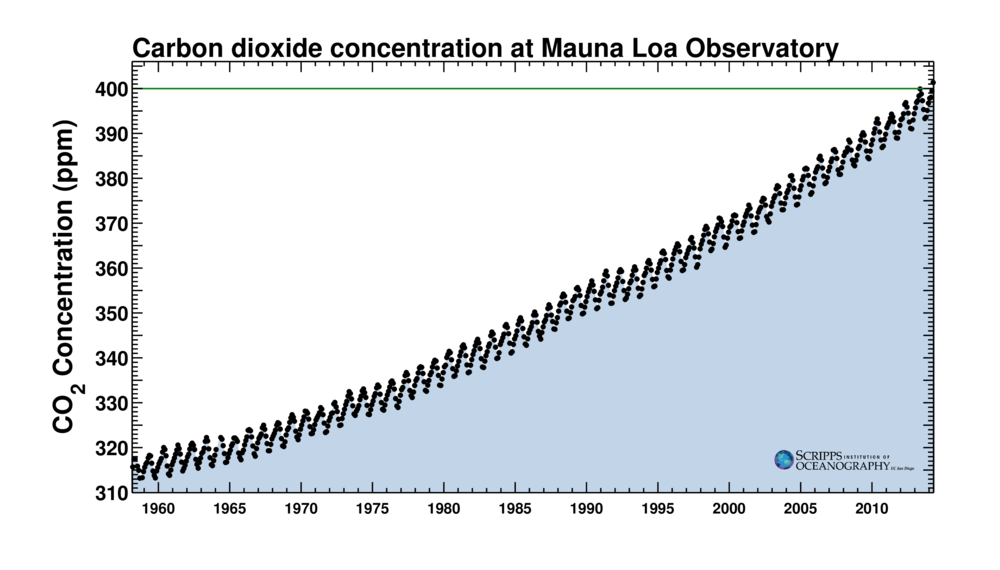 Notice that the Keeling Curve keeps zig-zagging up and down. As humans burn fossil fuels, we add more carbon dioxide to the atmosphere. But nature isn't an innocent bystander here. When trees in the Northern Hemisphere bloom in the spring and summer, they absorb more carbon dioxide. When the leaves wilt in the winter, carbon dioxide readings spike again.

levels are going up, but zig-zag up and down with the seasons

Last year, carbon-dioxide levels rose briefly above 400 parts per million for a single day in May before falling again. This year, they spent an entire month above 400 ppm — and will likely drop again this summer. In a few years, so long as humans keep burning fossil fuels, we should get above 400 ppm permanently.

Is 400 ppm an important milestone?

By itself, probably not — it's more notable as an indication that carbon-dioxide levels are going up and up, which will set the stage for future global warming.

The broader historical picture is a bit more relevant here: In recent decades, carbon-dioxide levels have remained higher than at any point in 800,000 years. Scientists figured this out by analyzing prehistoric air bubbles that had been trapped in ice cores: 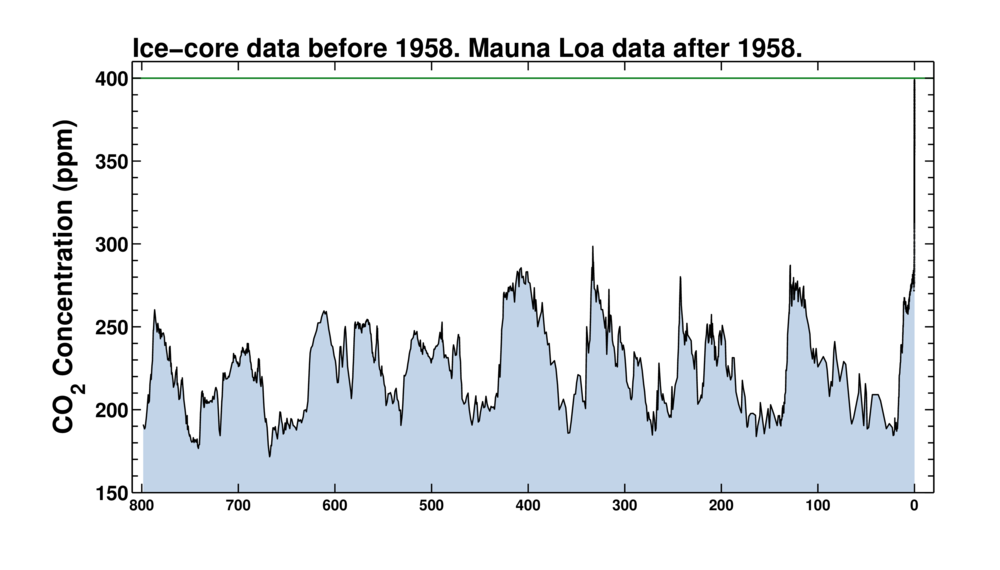 Indeed, some studies go further and estimate that carbon-dioxide levels may be at their highest point in 4.5 million years. During the Pliocene era, scientists have found, carbon-dioxide levels appeared to be around 415 ppm. (This rise was likely caused by wobbles in the Earth's orbit — humans weren't around then.)

We have to go back 4.5 million years to find an analogue to the present day

The climate of the Pliocene was much warmer and wetter than it is today. Global average temperatures were 3°C or 4°C hotter (that's 5.4°F to 7.2°C) and sea levels were between 5 and 40 meters higher.

That doesn't mean we'll get exactly those things today — the Pliocene isn't perfectly comparable, since a variety of different factors were at play. But it's the best guide we have to a fairly unprecedented situation. Other features of the Pliocene era: more frequent and intense El Niño events in the Pacific Ocean, intense flooding in the western United States, and severe coral reef extinctions as the oceans warmed.

What's also relevant, climatologists note, is the speed of change — the Earth is blowing past 400 parts per million today much faster than it did in the past. That makes it more difficult for species to adapt to the accompanying temperature increases (including, for that matter, humans).

So how high will carbon-dioxide levels rise?

That's the big unknown. The Intergovernmental Panel on Climate Change says that we should stabilize levels at somewhere between 430 and 480 ppm if we want a good shot at keeping total global warming below 2°C — which is ostensibly the international goal. For reasons I laid out here, that scenario looks increasingly unlikely.

Alternatively, if emissions keep rising without end, the IPCC predicts that we could blow past 1,000 ppm by the end of the century. That would put us in extremely uncharted territory — with global average temperatures likely to rise at least 4°C (or 7.2°F) over pre-industrial levels by the end of this century.