Share All sharing options for: White House: Most healthcare.gov enrollees were previously uninsured

Just over 8 million people have signed up private insurance on the health law's exchanges, the Obama administration's final tally for the first year of open enrollment shows. 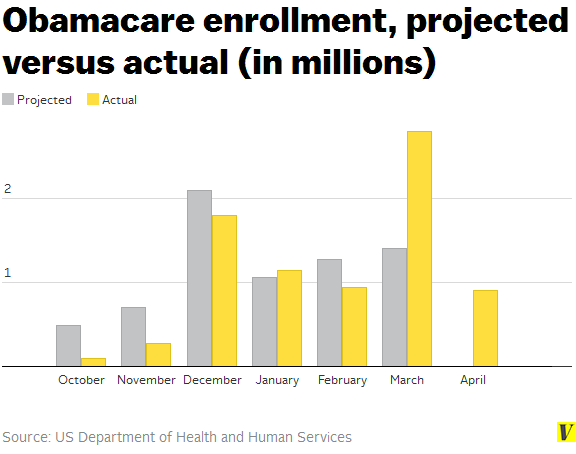 The report, published Thursday, also includes the federal government's first estimate of how many exchange enrollees lacked health insurance coverage prior to picking a plan on the marketplace.

Health and Human Services found that, of the 5.2 million people required to answer a question about whether they had insurance at time of signing up, 13 percent (695,000 people) said they already had coverage. That suggests a high proportion of people seeking coverage on the exchanges weren't replacing an old plan, and, instead, they were without health insurance when they signed up. (The White House, however, cautioned that this data is unreliable.)

This would be a much higher proportion of newly-insured enrollees on the exchange than other analyses have suggested. The RAND Corporation has estimated that only a third of those signing up for coverage on the exchanges were previously uninsured. And New York reported to the federal government, for example, that 30 percent of its enrollees already had coverage when they signed up on the state exchange.

The final report also indicated that the amount of young people (ages 18-34) signing up on the exchanges rose dramatically during the final months of open enrollment, rising to 28 percent of the overall signup pool. 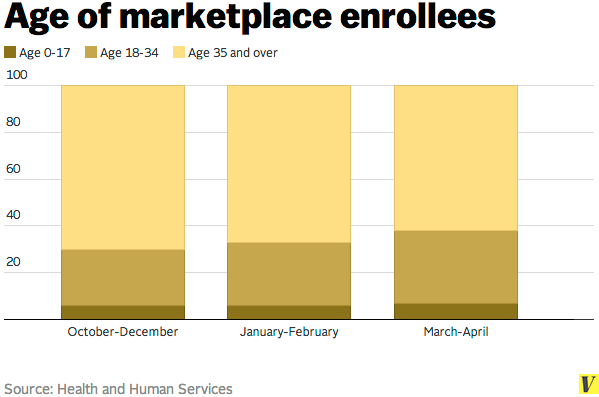 A higher number of young adults will likely help hold down insurance premiums, since they tend to use less health care. The White House had initially said it hoped for 2.7 million of a total 7 million signups (39 percent) to be between 18 and 35. But in the final tally, young adults are only 28 percent of overall signups.

No data yet on how many people have paid premiums

The report, however, doesn't explain how many people actually paid for their first premium, which is the final step to obtaining insurance. Major insurers have said that 80 to 90 percent of signups will pay for their first premiums, but a preliminary congressional report suggested the number could be as low as 67 percent. The White House says it won't have numbers on the people who paid until later in the year.

The final number doesn't count how many people signed up for Medicaid, which was expanded under the health-care law. A separate White House report put the number of Medicaid enrollees since October at 4.8 million.

Update: This story was updated with additional information from the Obama administration's press conference.