Twitter is having whatever the opposite of a moment is. Their first quarter earnings report released this week was ugly. The company lost $129 million in the first three months of the year, up from $24 million in the quarter a year ago. Losing money isn't necessarily a bad thing for a fast-growing technology company, but as Jay Yarow points out Twitter's growth is actually slowing down: 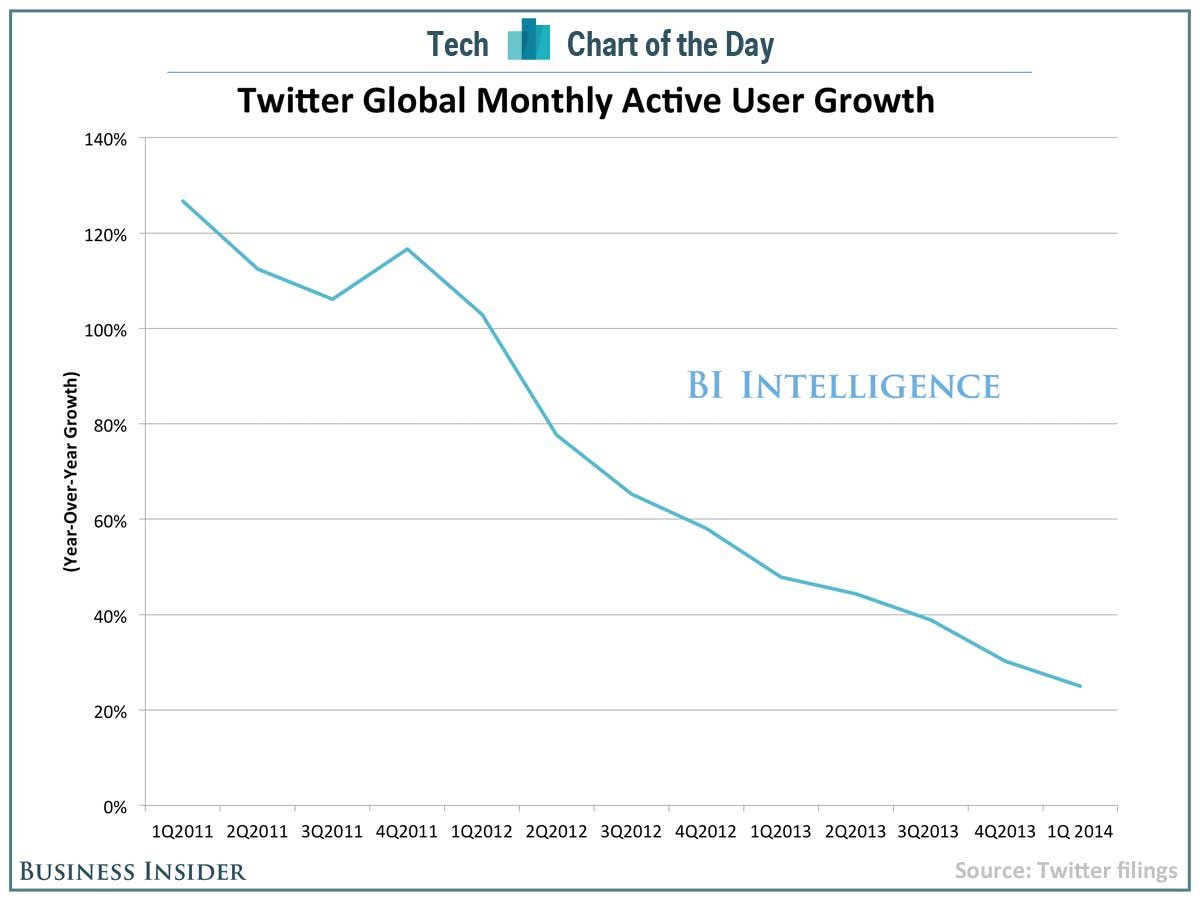 Things are looking so bleak for Twitter that the Atlantic's already writing its eulogy, citing both the poor earnings performance and the fact that Vox.com editor in chief Ezra Klein doesn't like it very much.

But plenty of things do just fine in the marketplace despite Ezra's lack of interest — North American professional sports, for example — and if you dive deeper into Twitter's financials the problem looks very different. There's essentially nothing wrong with Twitter except for the fact that it's not Facebook. Of course you can see why Twitter and its investors wish it was Facebook. Facebook is a gargantuan success. But almost nothing in the world is as big as Facebook. That's what makes Facebook such an amazing business story. The risk for Twitter (and, to be a bit melodramatic about it, the world) is that a perfectly good company with a perfectly good financial plan and a perfectly good product will destroy itself in an orgy of Facebook envy.

Back to that earnings report: 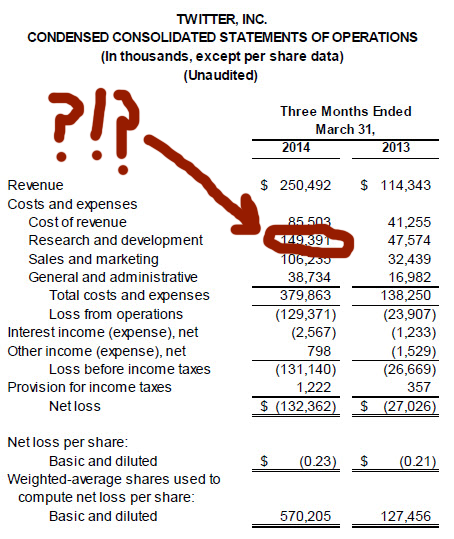 This is not a fly-by-night 1999-style company with no revenue. Not only is $250 million an awful lot of money, it's more than double what Twitter did a year ago. Subtract out everything Twitter spent on cost of revenue, sales & marketing, and general & administrative costs and you've got a nice $20 million left over.

Call it the tyranny of unrealistic expectations

The problem is Twitter spent a cool $150 million on research & development. And for what?

Obviously if cold fusion at scale or a cure for cancer emerges from this, we'll all be glad (and Twitter will make a bunch of money). But what Twitter appears to be spending money on is a somewhat flailing, desperate effort to make itself seem more like the larger, more monetizable, and faster growing Facebook. In the process, it risks spending itself into bankruptcy. Worse, from my standpoint, it risks alienating its core fans and users by trying to continually reinvent itself to look and work more like Facebook. Facebook is great, but people who want the Facebook experience can get it from Facebook. The Twitter experience is also great. If it's somewhat less appealing in the aggregate than Facebook, that doesn't mean it's a failure. It just means it's a smaller-scale success than Facebook.

Call it the tyranny of unrealistic expectations.

In any other industry, if you had a high revenue business with 250 million customers you'd consider yourself a success. Executives at Wendy's aren't going to go spend 60 percent of annual revenue on R&D in a madcap effort to become larger than McDonald's. I'm sure they wish they were larger than McDonald's. But the name of the game is to focus on the business that they do have — weird square burgers and some good chicken sandwiches — and try to grow and manage it prudently. Invest in new initiatives, but not so much as imperil profitability. Try new ideas and change things, but not so many or so suddenly that you abandon your customer base.

That's because we have a solid understanding of what the fast food industry looks like. McDonald's the global leader and because it's a global leader it's an icon.

But it's also an icon because nobody else is as big as McDonald's. That doesn't mean all the other brands are losers or failures, it means McDonald's is a wildy successful global icon. If you go around judging everyone's business on a McDonald's sized ruler you'll decide, absurdly, that everyone is failing and that newer brands like Shake Shack are doomed to failure because the odds of becoming McDonald's are so low.

By contrast, the successive rises of MySpace and then Friendster and then Facebook persuaded people that social networking is an inherently winner-take-all marketplace. And clearly there's something to this. Twitter and Facebook are useful in part because other people are using them, so sheer scale is part of the basis of competition. But perhaps the modern world has room for more than one social service. LinkedIn and Twitter both do things — and do them well — that Facebook does not. Conversely, they do not do the things that Facebook does well. Ultimately what Facebook does best — help people keep in touch with far-flung friends and family — strikes very close to the universal heart of human existence, so it's no surprise that it's the biggest company.

But even as Facebook speaks to universal needs, all of us have some less-universal ones too. I'd hate to go even a day without Twitter's amazing constant stream of news, wit, and vituperation. It's not for everyone, but it does seem to be tens of millions of us. And all indications are that Twitter can make it work as a business. If, that is, they don't accidentally destroy it in a desperate effort to try to become Facebook.