This map is bad news for China's economy, good news for America's

Share All sharing options for: This map is bad news for China's economy, good news for America's

One of the big, giant, world-changing economic trends of the last 20 or 30 years has been the decline of manufacturing in the Western world and its rise in Asia, particularly China. Spoiler alert: that trend is not going away. But it is slowing, and to some extent maybe even reversing a little bit, as China becomes more expensive for manufacturing and the United States becomes cheaper. 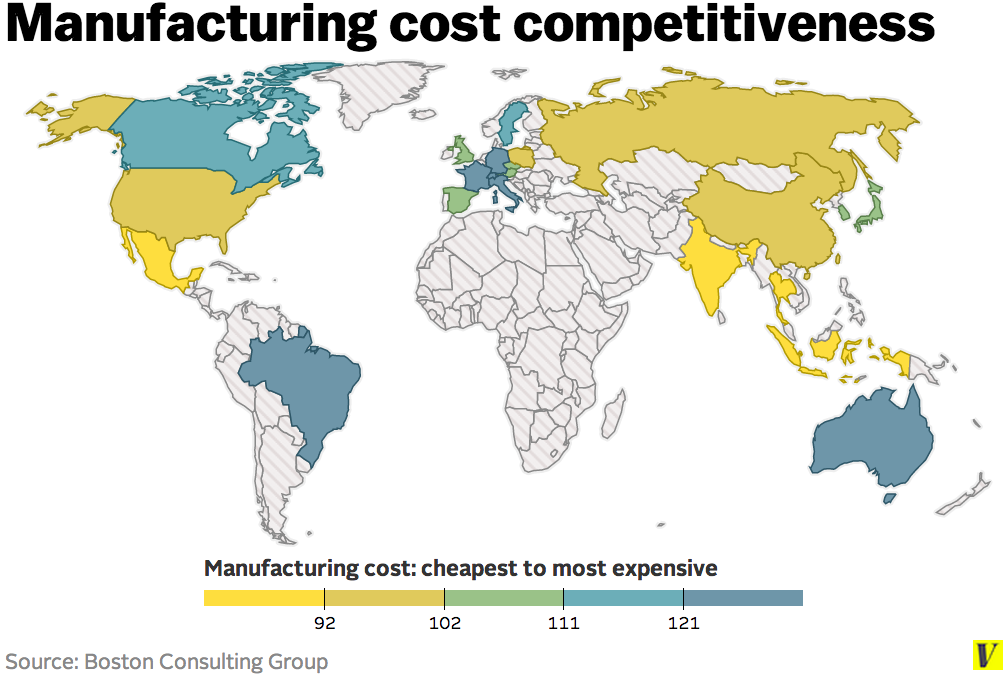 You'll notice a few things right away. The US is more competitive on manufacturing direct costs than most of Europe — it's slightly cheaper than even Poland — not to mention Canada, South Korea, and Japan. China, which built much of its economic might on ultra-cheap mass manufacturing, is no longer in that cheapest category as it's become more expensive that other Asian countries.

The very most expensive are generally rich countries with strong social safety nets that drive up labor costs — Australia, France, Germany — as well as Brazil, which is having its own economic issues right now. The cheapest are Asia's poorer countries and Mexico.

To be clear, this is just direct costs, such as labor and electricity; it does not account for stuff like different tax rates, the prices of materials, or quality of infrastructure, all of which are really important for companies deciding whether to put that new factory in West Virginia or West Papua. But direct costs do matter. Here's a chart from the Boston Consulting Group report, breaking down the costs. Look, for example, at Taiwan, where rising natural gas prices have made the manufacturing hub less attractive: 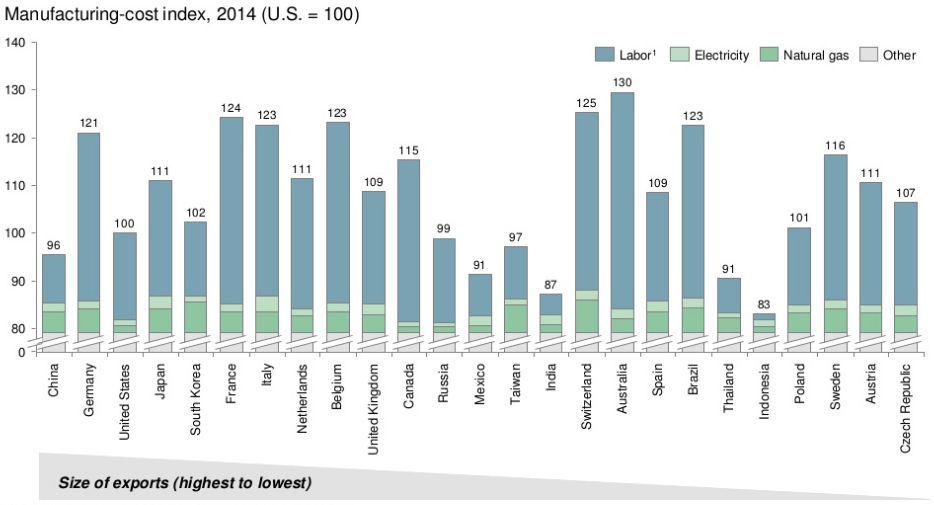 The big thing here is labor costs: the US has been able to bring labor costs down by increasing productivity. Our workers are still more expensive than those in other countries, but they're getting more done per person. The US still has a big trade deficit in manufactured goods, but becoming a little bit more competitive is awfully helpful.

Meanwhile, China's workers are getting a lot more expensive. This is happening because China has actually been too successful in attracting multinational companies: the big influx of investment and manufacturing jobs has raised China's overall economy to the point that housing and food and basic staples have become more expensive, which means that worker salaries have gone up, which means that manufacturing is becoming more expensive, which is putting all those jobs at risk.

China's leaders are well aware of this problem and have been trying for years to fix it, but the primary goal is not to keep labor costs down: it's to retool their economy so that it can sustain those higher wages, with a larger middle class that can buy all those Chinese-made goods. It's the right approach for China's economy, but it means that those rising manufacturing costs will probably keep rising.

Companies are aware of this trend as well. Here's how Renaud Anjoran, who blogs from China about manufacturing and outsourcing industries (it's actually a pretty interesting beat), visualized the way that multinational companies are changing their thinking on China: 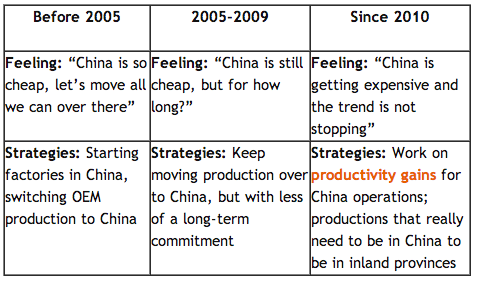 In other words, China will stay a big center of global manufacturing — it's still reasonably cheap, it has the infrastructure, it has the roads and the ports, and it has the supply chain. But that is slowly changing, which is why you're going to see more companies shift their manufacturing to other places: ultra-cheap southeast Asia, Mexico (which has raised its productivity significantly), and fingers-crossed maybe even to the United States.