How Chicago is using psychotherapy to fight crime — and winning

Share All sharing options for: How Chicago is using psychotherapy to fight crime — and winning

The idea of preventing crime using psychotherapy may sound vaguely utopian. But, believe it or not, it works, the White House is starting to take notice, and two researchers have a plan to take it nationwide.

The program in question is called Becoming a Man (BAM), and was developed by the nonprofits Youth Guidance and World Sport Chicago for use in Chicago schools. BAM consists of weekly hour-long sessions with groups of no more than 15 high school boys (the average instructor-student ratio is 1 to 8). It's not therapy in the strictest of senses, but the overall approach is borrowed from cognitive-behavioral therapy (CBT), which has overtaken more Freudian approaches in recent decades among practitioners and has a large research base demonstrating its effectiveness:

CBT is all about teaching meta-cognition: thinking about thinking. In a pure therapy setting, that means teaching patients to identify thought patterns that contribute to depression, anxiety, and so forth, so that they can work to replace them with healthier patterns. For example, a common negative thought pattern is catastrophizing, or exaggerating the importance of a short-term negative event in a way that causes undue distress and overreaction; if you've ever gotten a small piece of negative feedback from your boss and within a few minutes started worrying that you're about to get fired, that's catastrophizing in action.

BAM is interested in tackling catastrophizing, but of a very particular sort. The operating theory is that living in distressed and dangerous neighborhoods leads teen boys to adopt certain behaviors automatically that are totally rational and adaptive in that context, but fail them in an academic setting.

"In distressed, high-crime areas where sources of formal social control, like police or schools, are overwhelmed, people are on their own. People in this circumstance learn to automatically push back when threatened to avoid additional victimizations in the future," the University of Chicago's Jens Ludwig and Anuj Shah note. "If a teenager hears a teacher say, 'Sit down and be quiet,' the youth might instinctively or automatically perceive this as a situation where he should retaliate, act up, and preserve his reputation."

With that in mind, BAM uses its sessions to identify and challenge particularly common and harmful automatic thought patterns like that. Here's one example, from Ludwig and Shah:

Program staff divide students into pairs. One student is told he has thirty seconds to get his partner to  open his fist, then the exercise is reversed. Physical force is almost always the preferred method to compel counterparts to open their hands. After the exercise, the group leader asks the youths to explain what they tried and how it worked, pointedly noting that (as was commonly the case) almost no one simply asked his partner to open his fist. When asked why, youths would frequently say, "He wouldn’t have done it" or "He would have thought I was a punk," to which the group leader would respond by asking, "How do you know?"

The exercise serves two purposes: First, it is an experiential way of teaching students about hostile attribution bias, or the instinctive assumption that the other person has negative intent; second, it helps engage some who would not normally sign up for a prosocial activity by subversively showing them that beyond getting to skip an academic class, the very first activity of the program involves sometimes-rowdy horseplay.

How we know it works 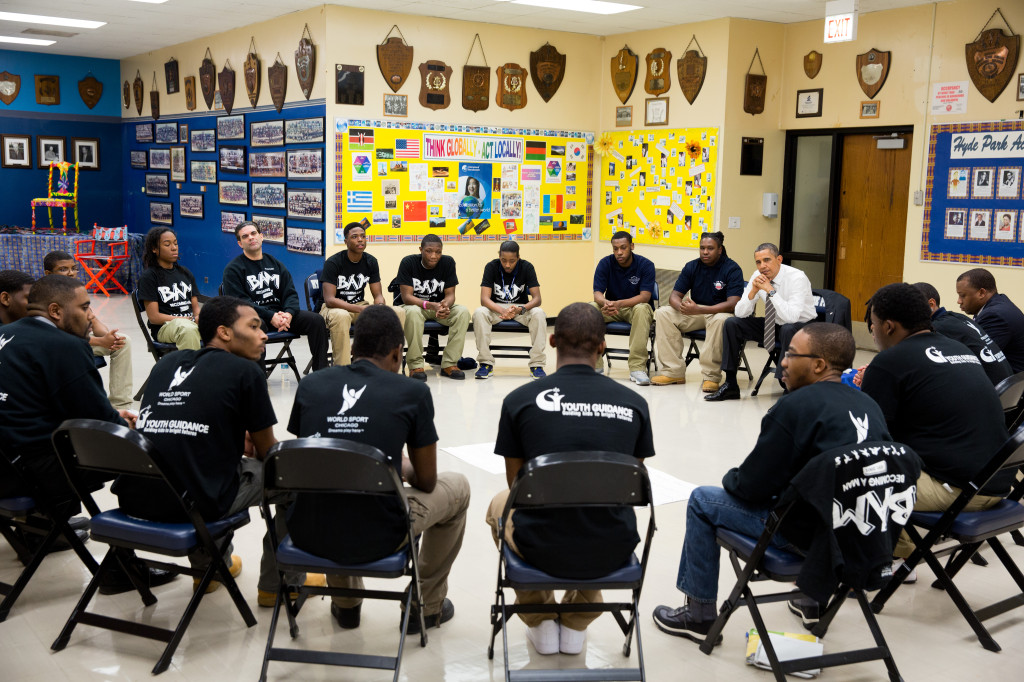 Obama sits in on a BAM session on February 15, 2013. Photo courtesy of Youth Guidance.

Three randomized controlled trials — one of the best methods available for testing if a policy works — have been conducted of BAM so far. The first trial, by Sara Heller, Harold Pollack, Roseanna Ander, and Ludwig (all at the University of Chicago), was conducted with 2,740 male Chicago students in grades 7-10 in 2009. It also included an after-school component where students learned non-traditional sports requiring considerable focus and self-control (archery, handball, martial arts, etc.), which was meant to hammer home the points made in school. It found that participants in BAM had 44 percent fewer violent crime arrests, and 38 percent fewer arrests for other charges that year. School outcomes improved too.

The second trial, conducted by Heller with the city of Chicago in 2012, combined the program with summer jobs placements for high schoolers, and had a sample of 1,634 students, both male and female. This confirmed the effects of the program on violent crime, with arrests falling by 51 percent during the program, and the fall lasting beyond its end. The third trial, which was conducted in the 2012-2013 school year with a sample of 106 students in grades 9-10,  and added in academic remediation to the mix, found that course failures fell by 66 percent during the program year and absences by 25 percent.

The findings weren't positive across the board. The second trial didn't share the positive academic findings of the first or third, and the first trial didn't find that the effects of BAM on crime continued after students left the program. And because of the program's relative youth, we still have a lot of time before we'll know if any of its effects last into adulthood. That said, Ludwig tells me he and the other authors committed to tracking participants for years into the future to figure out exactly that. "Chicago has electronic rap sheets, so we can follow arrest rates forever," he explains.

What it costs — and what it pays back

Perhaps the most striking finding from the randomized trials is that BAM quite possibly pays for itself many, many times over. In the first trial, BAM cost $1,100 per participant, but the authors estimated its effects could save society as much 30 times that by reducing violent crime and its attendant social costs in the year the program takes place. By comparison, the Perry preschool study, the most famous and impressive trial in that area, had benefits exceeds costs by a factor of between 19 and 31, if you count future benefits the same as present-day ones. That, Ludwig says, "looks good compared to any intervention the government can consider, including early childhood, and yet we're seeing it with a target population that lots of people have written off."

Different variations on the program vary in cost, however. The second trial cost $3,000 per participant, and the third trial cost $4,400 per participant — a fourfold increase. Then again, those trials incorporated additional elements like a summer jobs program and remediation programs. And if the 30-1 benefit cost ratio is anywhere close to right, then it's worth doing even given a dramatic increase in the program's cost.

Where to go from here 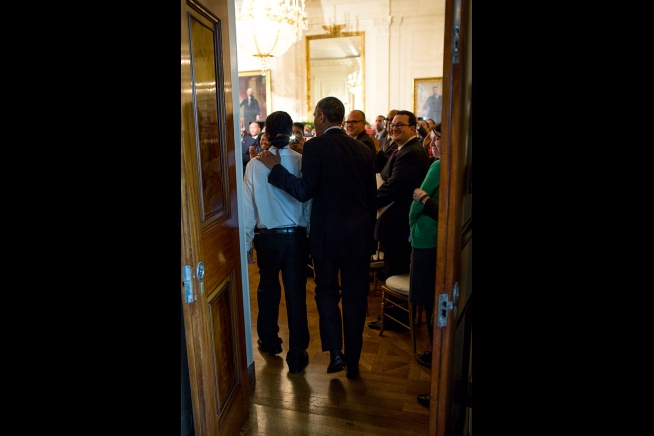 President Barack Obama enters the East Room of the White House with BAM participant Christian Champagne at the start of the "My Brother's Keeper," event, Feb. 27, 2014. Photo courtesy of Peter Souza/White House.

The program has attracted national attention before. President Obama, who was introduced to BAM by his former chief of staff and Chicago mayor Rahm Emanuel, sat in on a session in February 2013, and invited participants to the White House that July. When he announced his My Brother's Keeper Initiative, which targets young men of color, he was introduced by Christian Champagne, an 18-year-old BAM veteran. "I could see myself in these young men," Obama said. "And the only difference is that I grew up in an environment that was a little bit more forgiving, so when I made a mistake the consequences were not as severe."

But so far, there hasn't been much movement to expand the program nationwide. Ludwig and Shah are hoping to change that. In a report for the Hamilton Project, they propose allocating $400 million over five years to competitive program that would select forty cities, in each of which a local nonprofit would offer the program to 500 youths. The plan would also include having Youth Guidance, the original developer, run versions of it in ten of the selected cities, so researchers can see if BAM can be "franchised" out to other organizations without becoming less effective; if it can, the prospects for succeeding nationally are much higher. If the demonstration works, Ludwig and Shah support allocating $2 billion a year to make the program available nationally; that's enough to include every youth in poverty, and a few above the poverty line too.

There's still a lot about the program that's unknown. We don't know if the same model can work with girls, or how large, if existing at all, effects outside the program period will be. But it does put another nail in the coffin of the old conventional wisdom that "nothing works" when it comes to using health services and education to prevent crime, a conventional wisdom that contributed to policies ramping up incarceration, with all the attendant damage that causes. "The persistent skepticism in the '70s about social policy preventing crime," Ludwig says, "might turn out to be too pessimistic."