College tuition is never going back to pre-recession levels

Share All sharing options for: College tuition is never going back to pre-recession levels

After years of cutting away at higher education funding, states have begun increasing their commitments to universities.

Public tuition sticker prices have risen by 28 percent (after adjusting for inflation) since 2007, a new report from the Center on Budget and Policy Priorities shows, as states' higher education budgets fell during the great recession.

But in the last fiscal year, spending actually grew by, on average, 7 percent. Still, if history is any guide, it's not going to get much better for students and families. This chart from the State Higher Education Executive Officers, also in the new report, shows why: 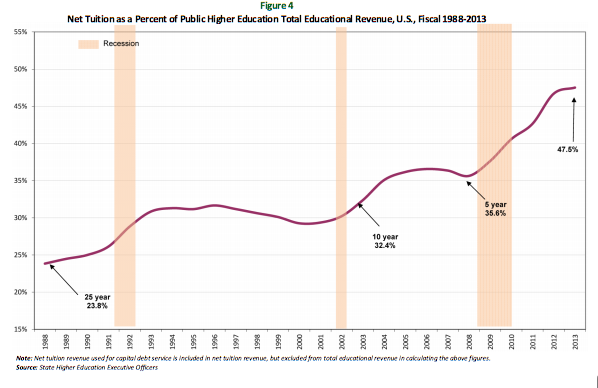 The chart shows the percentage of the costs of education that students have borne. The shaded areas represent recessions. Students have picked up more of the tab as state budgets falter in tough economic times.

But even when there's a recovery, students don't tend to get a break; at best, a good economy lets states and colleges maintain the status quo. The trend line goes only one way: up.

Meanwhile, states are using the revenue recovery to cut taxes, the report notes — cuts that effectively lock in the lower spending levels for higher education.