Share All sharing options for: Americans believe two things about Obamacare enrollment that can’t both be true

The most recent Kaiser Family Foundation tracking poll had some good news and some bad news for Obamacare. The good news was that a plurality of Americans know the law signed up 8 million people. The bad news is that a majority of Americans nevertheless think the law fell way short of expectations on enrollment.

In the paper, Thorson, an associate professor at George Washington University's School of Media and Public Affairs, runs an experiment where she splits people into three groups. The first group is given an article neutrally profiling (fake) congressional candidate John McKenna. This was the control group.

The second group got the same article, but now it said that McKenna was under fire for "several substantial donations from convicted felon Daniel Elsio, who formerly headed up the largest organized crime syndicate in Kansas." The third group got that article, too, but then they were given another article with this this (hilarious) correction:

Correction: Regarding the candidates' biographies, an article published in the Kansas City Star last week stated that Daniel Elsio, a felon convicted of drug trafficking and murder, was a frequent donor to John McKenna's campaign and attended several [Republican/Democratic] party fundraisers. However, further investigation of the campaign donation records has shown that the donor listed was actually Daniel Elio, the owner of a local car dealership. 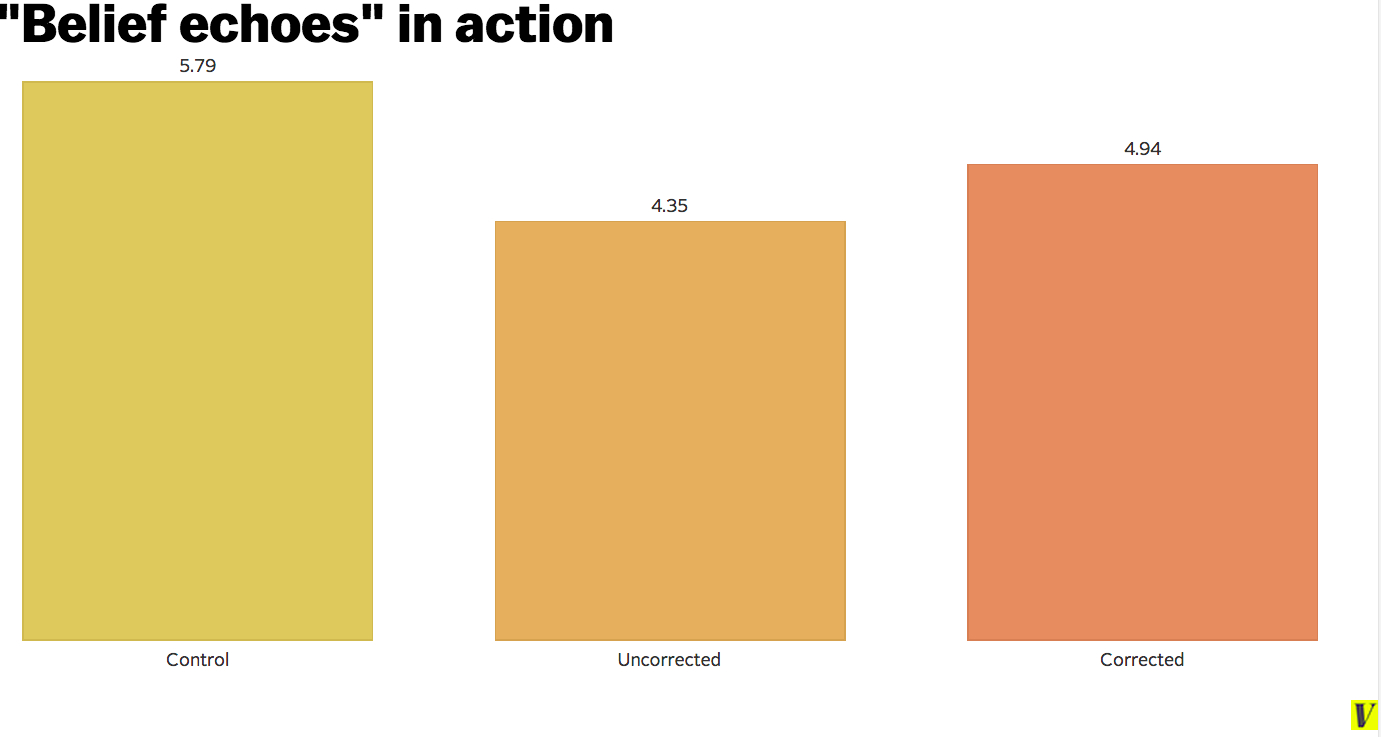 "Exposure to negative information about a candidate creates what I call belief echoes," Thorson writes, "effects on attitudes that persist even after the information is shown to be false."

Obamacare has a belief echoes problem.

For months, the press was wall-to-wall with coverage of Obamacare's catastrophic launch. People knew that Obamacare was a disaster that no one was able to sign up for. Then, unexpectedly, the March surge was so overwhelming that enrollment beat expectations. That got wall-to-wall coverage too, and so a lot of people actually know that Obamacare signed up 8 million people. But the impressions formed by the early coverage persist. People think the law missed its enrollment targets even as they've actually absorbed the data showing the law beat its enrollment targets.

All that said, though the media used it as a benchmark, success or failure for Obamacare was never going to be defined by whether the law signed up 6 million people or 8 million people in its first year. The mix of healthy and sick applicants (which gets shorthanded as young and old applicants) always mattered more. It now looks like the law signed up somewhat fewer young people than the administration hoped but more than enough to keep premiums stable in most markets, which is what matters for its long-term prospects. The hitch is that story will vary a lot from state to state, and some states may be wild successes whereas others don't have nearly enough young, health applicants to keep premiums down.