Share All sharing options for: The 2 simple facts that explain why the US prison population exploded

There's growing momentum for reducing mass incarceration in America. Both the federal government and states are beginning to take a hard look at how many people they're sending to prison and for how long.

But how did the US get here? Why did the US prison population grow so muchover the past 40 years?

A National Research Council report from 2014 debunked two big misconceptions about what caused the increase, and offered two big reasons: prosecution has become more efficient, and prison sentences have lengthened. Here's a guide:

The report concluded the rise of incarceration couldn't be traced to crime rates going up. Crime rates have fluctuated over the past forty years, and don't appear to have much of an impact on the prison population — no matter which way crime rates went, incarceration rates kept growing. (The report also found, as other researchers have, that there's no evidence that harsher prison sentences deter crime.) 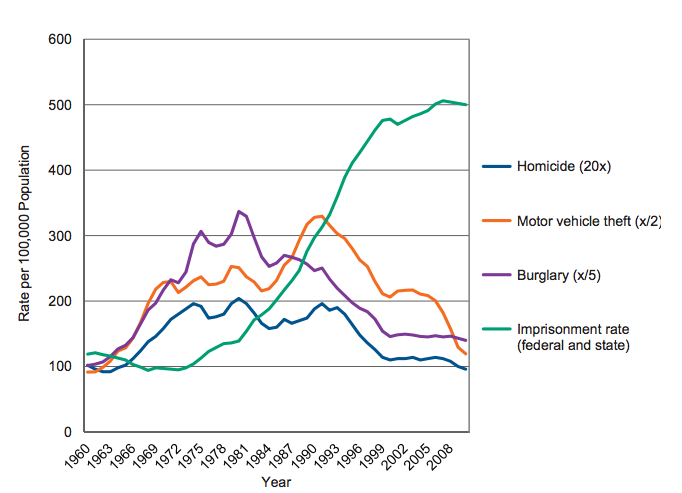 It WASN'T because better policing led to more criminals getting arrested

Policing has changed significantly since the beginning of the mass-incarceration era, and most of these changes have been designed to make policing more effective. That implies that police would be better at apprehending criminals today than they were thirty years ago.

But the NRC report showed that since 1980, the ratio of arrests per crime — in other words, the proportion of crimes that police were able to find and arrest suspects for — stayed pretty flat: 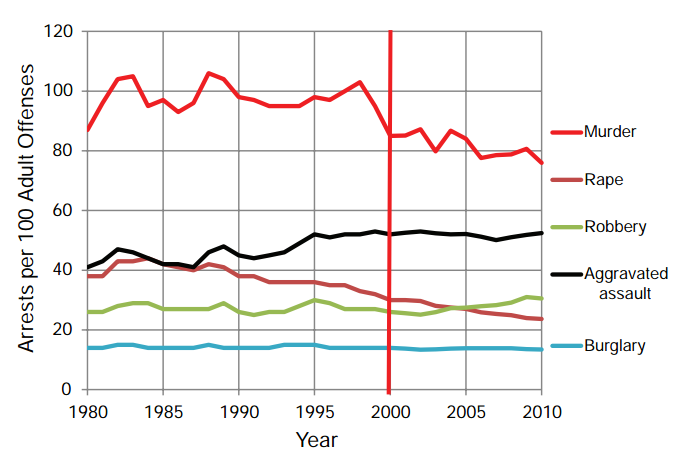 Based on the arrest-to-crime ratio, the authors wrote, "no increase in policing effectiveness occurred from 1980 to 2010 that might explain higher rates of incarceration."

The NRCreport found that prosecution has gotten a lot more efficient — and that, the authors concluded, was a substantial reason for the explosion of the incarcerated population. 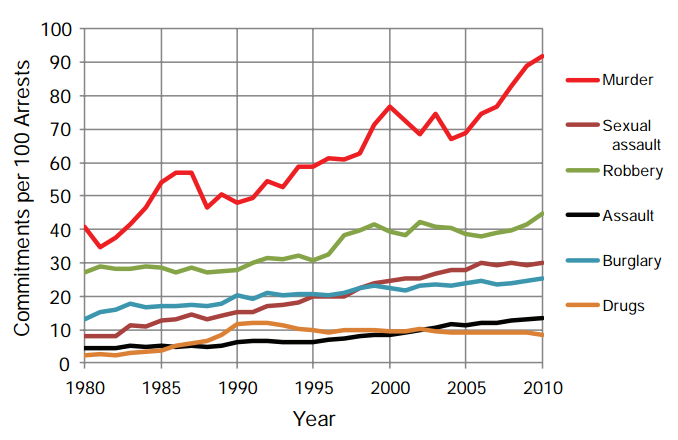 Why are people who get arrested more likely to end up in prison now than they were thirty years ago? Part of it is that more crimes now require a prison sentence than required one in 1980, so more of the people who are found guilty of crimes end up having to go to prison for them (rather than getting probation or a fine).

Part of it is also that most people who get convicted of crimes these days never even go to trial — they just plead guilty in exchange for a shorter prison sentence. This makes it much easier for prosecutors to move cases through the courts. Of course, efficiency isn't necessarily the same as effectiveness — in theory, the point of prosecution should be to figure out whether the person committed a crime or not, not to convict and sentence as many people as possible.

But whatever the merits of the way prosecution works, the authors concluded it was definitely a big reason for the rise of mass incarceration. In fact, during the 1980s it was the biggest reason, before being overtaken by the last and most important factor.

It WAS because people who went to prison served more time

The biggest reason the prison population exploded, especially after 1990: more people were in prison for longer periods of time. 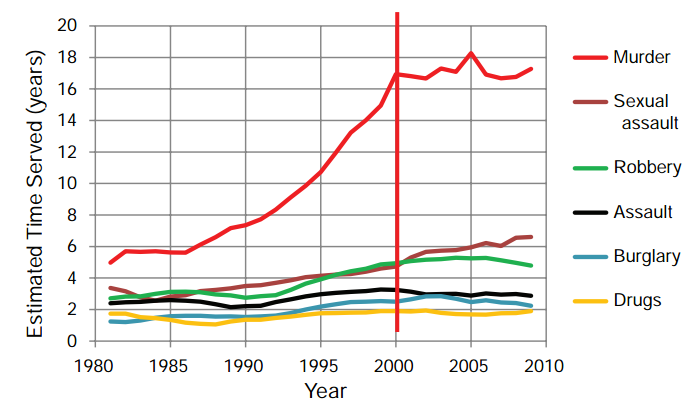 This is also largely due to changes in sentencing policy. States and the federal government added lots of new mandatory minimum sentences in the 1980s and 1990s, which forced people convicted of a given crime to serve a certain number of years in jail.

One particularly harsh kind of mandatory minimum sentence was imposed as "three-strikes" laws, which forced a criminal convicted of his third felony to serve a long prison sentence (between 25 years and a life sentence). States and the federal government also passed "truth-in-sentencing" laws, particularly in the late 1980s and early 1990s, which forced inmates to serve a large amount of their prison sentences (typically 85 percent) before being eligible for parole.

Ultimately, the NRC report's authors said, the common denominator in both of the big causes of mass incarceration — more prisoners per arrest, and longer sentences per prisoner — is the harsher sentencing policies of the 1980s and 1990s. That means that sentencing reform policies that some state governments have been pursuing, and that members of Congress in both parties have proposed, are a good place to start when it comes to reducing mass incarceration — even if they're not a panacea.