Emmy winner 'The Normal Heart' might be HBO's most important movie

On Monday night, HBO's The Normal Heart was recognized with an Emmy win for Outstanding Television Movie. During his acceptance speech, Ryan Murphy, the movie's director, said that he hoped the movie inspire young people to be "Larry Kramers." Here's a brief explanation of Larry Kramer's life, what he fought for, and why The Normal Heart is so important.

The Normal Heart is a largely autobiographical play from 1985 written by Larry Kramer about a gay man living through the HIV-AIDS Crisis in New York City in the 80s.

HBO has adapted it into a movie, which aired on May 25, 2014 — right before gay pride month. The film was directed by Ryan Murphy (Glee), and stars some A-Lister actors including Julia Roberts and Mark Ruffalo.

The last few movies that HBO has deeply invested in — Behind the Candelabra, Temple Grandin — have gone on to rack up awards and publicity. And there's also the very-real effect of those movies bringing a new awareness and appreciation for the people they featured (Grandin, and Liberace).  The same could happen for Larry Kramer.

The play is a slightly fictionalized autobiography of Kramer's painful experience and perspective during the beginning of the AIDS crisis and watching it unfold. The Normal Heart begins in 1981 when the first few AIDS cases were being found. The main characters in the play are Ned Weeks, a character based on Larry Kramer, Dr. Emma Brookner, a female doctor based on the real life Dr. Linda Laubenstein, and a few of Weeks's close friends and political enemies. 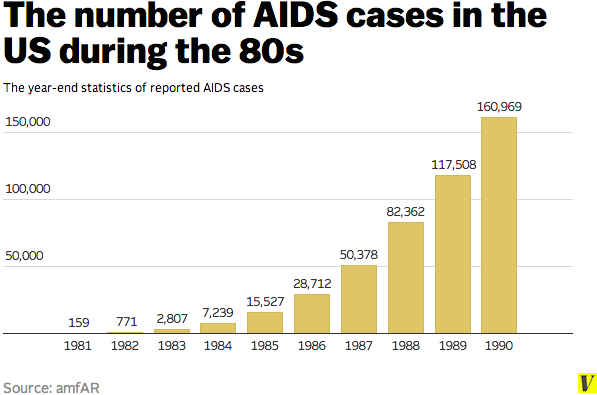 At the time, the disease was still a mystery, and doctors, public health activists, and gay men — the main characters in Kramer's play — had no clue what they were dealing with, or how to help gay men and curb risky behaviors contributing to the illness's spread without damaging the image of the gay community.

They all just knew that there were lung infections, symptoms of the disease, and that gay men who had this disease were most likely going to die. "By year-end, there is a cumulative total of 270 reported cases of severe immune deficiency among gay men, and 121 of those individuals have died," the US government's AIDS awareness website explains.

Kramer is one of the LGBT community's most well-known civil rights activists.  He co-founded the Gay Men's Health Crisis, and perhaps more centrally when trying to understand The Normal Heart, he also founded the AIDS Coalition to Unleash Power (ACT UP), the most prominent activist organization to emerge from the crisis.

One of ACT UP's slogans was "Silence = Death" — a message which crystallized Kramer's feeling of frustration, anger, helplessness as he watched his friends die of AIDS and government officials like New York City Mayor Ed Koch and the sitting president, Ronald Reagan, ignore it.

The problem it was protesting

The first cases of AIDS started cropping up in doctors' offices in 1981. Ronald Reagan did not publicly say the word until 1985 and did not give his first major speech about the disease until 1987. Rep. Henry Waxman, a Democrat, wrote an op-ed that appeared in The Washington Post in 1985 where he questioned Reagan's silence on the disease and whether it was because the disease's main victims were gay men:

It is surprising that the president could remain silent as 6,000 Americans died, that he could fail to acknowledge the epidemic´s existence. Perhaps his staff felt he had to, since many of his New Right supporters have raised money by campaigning against homosexuals.

We will never how many lives Reagan and other government officials could have saved if they were more direct in addressing AIDS epidemic at the onset and focused on helping the LGBT community, specifically gay men, earlier. What we do know is the reality that eventually played out, the thousands of lives that were lost, and the 1 million-plus people living with HIV-AIDS in the U.S. today.

Kramer's approach was blunt, passionate, and angry. And some of his peers at the Gay Men's Health Crisis, as the play explores, felt like this wasn't the correct approach — it's not unlike the way people talk about Martin Luther King Jr. and Malcolm X's disparate approaches to civil rights.

At the beginning of the AIDS crisis, gay men were just beginning to come out and connecting to other gay men. And some of his peers thought that Kramer's abrasiveness, and anger might be harmful. "To his critics, he is arrogant, self-promoting, irrationally angry and rude, cruel, deluded, double-dealing, and possibly deranged," Vanity Fair's Michael Shnayerson wrote in 1992.

Kramer felt that in order to win the war against AIDS, someone needed to start it. That meant calling out people, regardless of their position of power or sexuality, he felt were down-playing the crisis.

"I also learned to take a deep breath and maybe a stiff drink if an email from Larry Kramer lurked there," New York Times columnist Frank Bruni wrote in a column on Sunday, explaining that Kramer would send metaphorical "brickbats and Molotov cocktails" to get his point across.

But even though his actions may have rubbed people the wrong way at the time, Bruni and many others argue that they were necessary in order for gay rights to move forward:

He was the blazing conscience of a generation of gay people at a crucial hinge of history, when a critical mass of us came far out of the closet, largely because of the AIDS epidemic. He, among others, demanded no less, making clear that our survival depended on it.

Why it took 30 years

The play's subject meant it took a while before Hollywood opened up to adapting the play. A story about the devastation of AIDS isn't the easiest of sells. "Way back then, it just felt like an incredibly depressing tale that looked as if it would appeal only to a narrow demographic corridor," a source close to the project told The Hollywood Reporter. "It was viewed as a major downbeat story that didn't seem to have any wide appeal."

That made actors wary of appearing in it. "At first, nobody wanted to produce it. People were frightened, worried that it would hurt their careers,"  Michael Lindsay-Hogg, the man who directed the original stage production, told THR. "It was a fight for Larry from the very beginning."

It will be a couple of weeks before we start seeing the reviews of the HBO movie. Upon the play's initial performance, critics weren't completely sold on the play but praised the play's blood and guts. The New York Times's Frank Rich wrote at the time:

Although Mr. Kramer's theatrical talents are not always as highly developed as his conscience, there can be little doubt that ''The Normal Heart'' is the most outspoken play around - or that it speaks up about a subject that justifies its author's unflagging, at times even hysterical, sense of urgency.

The Los Angeles's Times theater critic, Dan Sullivan, believed the play was "so intent is it on imparting its rage at the Establishment and in inspiring gays in the audience to stop playing victim--and to stop killing themselves," that it took away from the play's artistry.

The most recent Broadway revival, in 2011, got rave reviews. It was directed by Joel Grey and George C. Wolfe and went on to win three Tony awards including the award for "Best Revival of a Play."

Perhaps the most pertinent thing to remember is that even though it's wrapped in death, The Normal Heart is a raw, and crucial chapter of gay history. The AIDS crisis killed a lot of people who could have lived full lives as doctors, lawyers, artists, musicians, deli owners, bus drivers, bakers, florists, truck drivers, construction workers— you name it. They never got to live those stories out, so Larry Kramer wrote theirs.