The best evidence we have that Obamacare is working

Share All sharing options for: The best evidence we have that Obamacare is working

On March 13th, House Speaker John Boehner held a press conference. By that point, Obamacare enrollment was beginning to accelerate. But Boehner thought it was an illusion. He wanted to change the narrative. And so he made a startling claim: Obamacare, he said, had led to fewer people having health insurance.

Reporter: Mr. Speaker, you said a minute ago there are fewer people today with health insurance than when the law was passed. I want to make sure I understand. You're saying that Obamacare has resulted in a net loss of insurance?

Boehner was going off of claims and guesstimates. He admits as much in his answer: this is what he believes, not what he knows. But a new report from the Rand Corporation gives us a fuller picture than ever before. And so now we know: John Boehner was wrong.

Washington has been tracking enrollment in Obamacare's exchanges and, less precisely, in Medicaid. The Rand study uses a nationally representative sample to track vastly more data: they know roughly how many people were buying insurance from their employers, from insurers, and much more. They also know how many people were losing insurance, either through cancellations, or because employers were dropping them, or because they just stopped paying premiums. 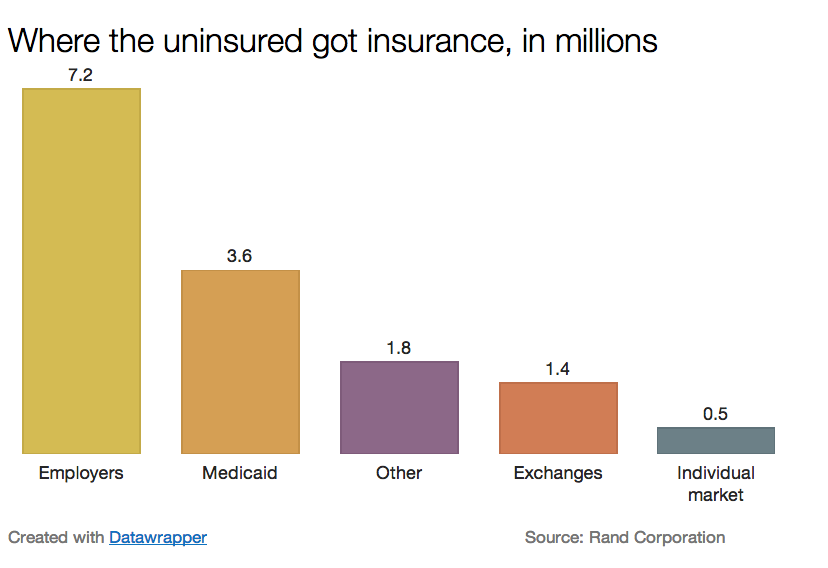 One major finding in the Rand study: on net, more than 8 million people gained insurance through their employers. And most of those people were previously uninsured. That's a huge deal.

Rand speculates that some of the increase might be people buying insurance so they don't have the pay the individual mandate, and some of the people might be getting new jobs that offer insurance because the economy is improving. Either way, predictions that Obamacare would lead to employers throwing people off insurance are, at this point, proving completely wrong.

3) The uninsured population has fallen from 20.5 percent to 15.8 percent

That's a sharper drop than Gallup has found, though both surveys show that the number of uninsured is falling fast. 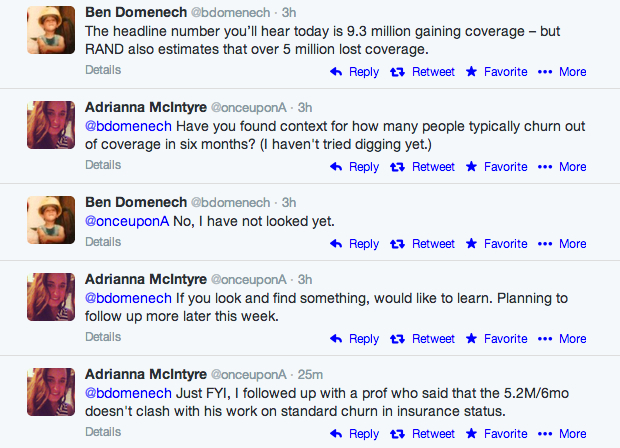 Something the Rand study does a nice job of showing is churn. Health researchers know that people are always gaining and losing health insurance. Folks get fired, or they get hired. They become poor enough to get Medicaid, or rich enough that they no longer qualify. The question is whether the gains outweigh the losses.

This churn has been a particular problem for Obamacare because the law is being blamed for the kinds of insurance losses that happen all the time anyway. In a way, the law has been a huge boon to employers who wanted to cut benefits to save money, or insurers who wanted to close down an insurance pool that was no longer profitable. Now they can just blame Obamacare.

If you want to dig deep into this issue, there's an interesting Twitter conversation on it between Ben Domenech and Adrianna McIntyre.

5) Many more people have gained insurance since the study

Rand is very upfront about the fact that much of the data for their survey was collected in early March — before Obamacare's massive, end-of-month surge.

Moreover, enrollment in Medicaid is still open, and Obamacare is also still signing people up into the exchanges through various deadlines and loopholes. So it's certain that hundreds of thousands — and perhaps millions — more people have gotten insurance since the Rand survey ended. So think of this as a low-end estimate.

6) 80 percent of people are unaffected by Obamacare.

Obamacare was built to leave most people alone. And the Rand survey shows that it's succeeding in that. "The ACA has not led to changes in the health insurance coverage of most people," Rand says. "Among adults, fully 80 percent still had the same form of coverage in March 2014 as in September 2013."