Share All sharing options for: College wait lists are rejection letters in disguise

Bad news for any students who landed on a hyper-selective college's wait list: you probably aren't going to get in.

Last year, Middlebury College waitlisted 1,705 applicants — nearly 20 percent of all the applications it received. The college didn't admit a single one of them.

The University of Richmond's wait list was five times the size of its eventual freshman class: 4,129 people. Two percent of them were eventually offered admission.

The American Enterprise Institute's Center on Higher Education Reform looked at the numbers for the top 50 universities and top 50 liberal arts colleges in the U.S. News rankings. (Only 71 had available data on their wait list policies.) They found that at many of them, colleges put more students on the wait list than they could ever hope to admit. 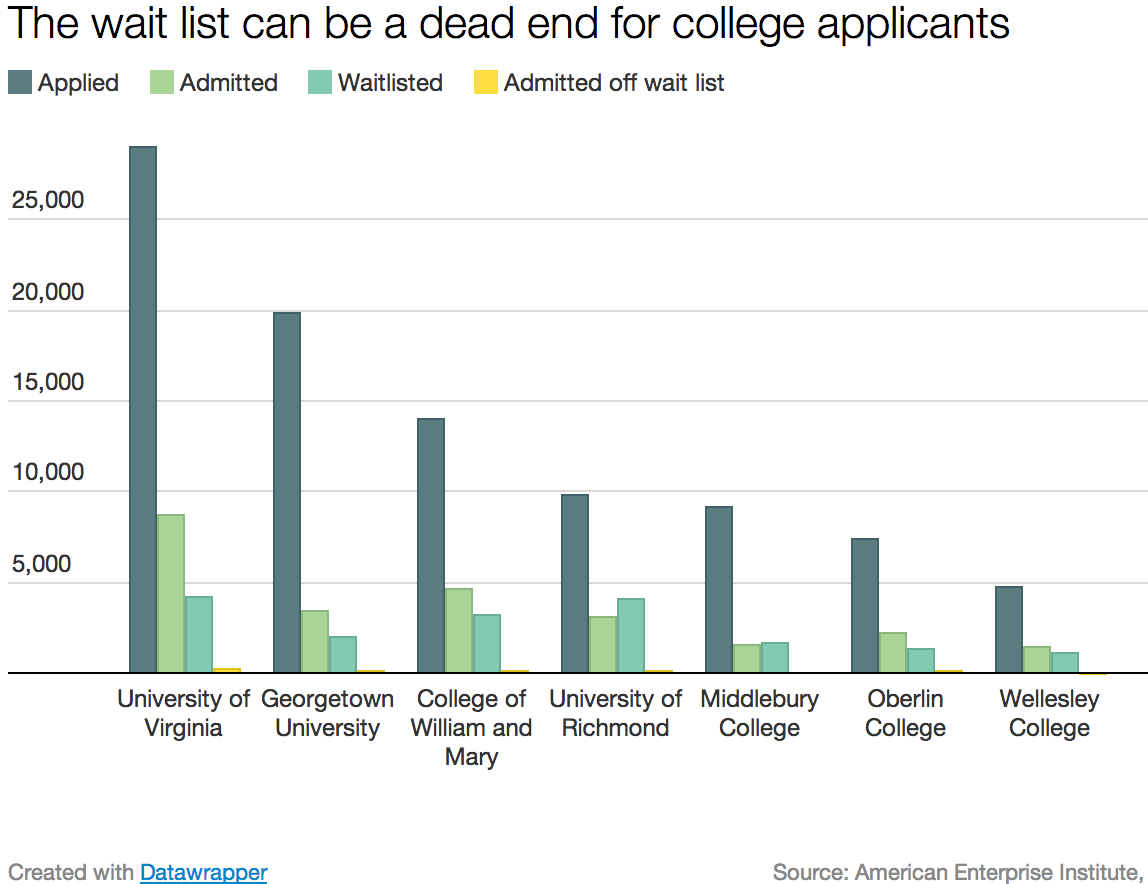 Yes, the bar for students admitted off the wait list really is that tiny.

The more selective a college is, the more likely it is to wait list students, according to a 2012 study from the National Association for College Admission Counseling. And the more likely a college is to wait list students, the less likely it is to eventually accept them. AEI's numbers back this up: Of the highly ranked colleges who put at least 10 percent of their applicants on a wait list, more than 90 percent of students on the wait lists never got in.

The best way off a wait list — at least at private colleges — could be wealth. Just over half of private colleges in the 2012 study from the admissions counseling group, which is known as NACAC, said they take wait-listed students' financial need into account when deciding whether to eventually let them in. (Most public colleges don't consider family finances during the admission process.)

The ultra-selective colleges that top the U.S. News rankings aren't typical. Most colleges don't have a particularly competitive admissions process. The NACAC study, which looked at 369 colleges, found that about one-third of all applicants placed on a wait list were later admitted.

Even for the highly ranked colleges, there were some exceptions, says KC Deane, a research associate at AEI who is studying wait list policies. The University of California-Berkeley, for example, put 161 students on its wait list in 2012 and accepted 107.

Students can decline a wait list spot. But Deane based her research on how many students were wait listed in the first place, not how many chose to stay there, because colleges clearly were waitlisting many more students than they could plausibly enroll.

Why do colleges do this? Colleges keep a close eye on their "yield," the proportion of admitted students who end up putting down a deposit. A bigger freshman class than they expected, and they're facing the possibility of bulging classrooms and not enough space in the dorms. On the other hand, too few students, or not enough students who can pay their own way, could lead to a budget crunch. That's particularly true at colleges that don't have a huge endowment and depend on tuition revenue.

The wait list is a way of hedging bets.  Of course, colleges concerned about having enough students could just admit more people. But that could make a college look less selective in rankings, Deane says.

The focus in admissions season is on prospective students' stress — but colleges have anxiety of their own on whether the students they choose will choose them, too.

Note: This article has been updated to correct the number of students who were waitlisted at Middlebury. It is 1,705, not 757; 757 students accepted a place on the wait list.