Obama is deporting more immigrants than any president in history: explained

Share All sharing options for: Obama is deporting more immigrants than any president in history: explained

President Obama is going to leave the White House having deported more immigrants than any other president in history — at least 2 million deportations to date. And, not surprisingly, many Latinos and immigrant-rights advocates who supported him are angry about it.

In March, the head of the National Council of La Raza called Obama the "deporter-in-chief" — an epithet that gets thrown around a lot in certain circles these days. On the flip side, there are plenty of critics who say that Obama isn't deporting enough people. And the administration has added to the confusion by alternately puffing up and downplaying its record.

The issue is getting more attention as hopes fade that Congress will pass an immigration reform bill. The groups that had pushed for legislation are now focusing on asking Obama to rein in his deportation regime. And they just might get a shot: the administration announced that it would review its deportation policies in March 2014.

So let's back up a second. Here's a primer on what the Obama administration has actually been doing on deportations over the past five years — and what it could change now.

How many immigrants has Obama deported?

The best estimate is that the Obama administration made its two millionth deportation in late March. If Obama maintains last year's pace, he will have deported more people by the end of 2014 than George W. Bush did in his entire eight years. This is even though the unauthorized population peaked in 2007 (under Bush) and has been smaller under Obama due to the recession.

How do we know how many immigrants are being deported?

We have to extrapolate. By the end of September 2013, the Obama administration had deported 1.83 million immigrants.

Data from October 2013 until the present won't be available until the end of 2014.

But assuming the administration's deportations kept pace with last year's — about 1,010 per day — then the two millionth deportation likely happened sometime in the middle of March 2014.

Why is Obama deporting so many people?

High deportation rates are a legacy of the Bush administration, which started deporting more immigrants every year after the 2002 creation of an agency devoted solely to immigration enforcement inside the United States: Immigration and Customs Enforcement (ICE).

Obama says he has tried to make deportation policy "smarter" by targeting "criminals" and "gang bangers" — and not going after families. At the same time, the Department of Homeland Security has pushed to deport more immigrants than ever. Immigration officials wrote a "goal" of 400,000 deportations per year on a whiteboard at their headquarters, according to the New York Times.

The federal government couldn't do both. So, in the end, Obama's plans to selectively target deportations just ended up augmenting the Department of Homeland Security's deportation dragnet — rather than replacing it: 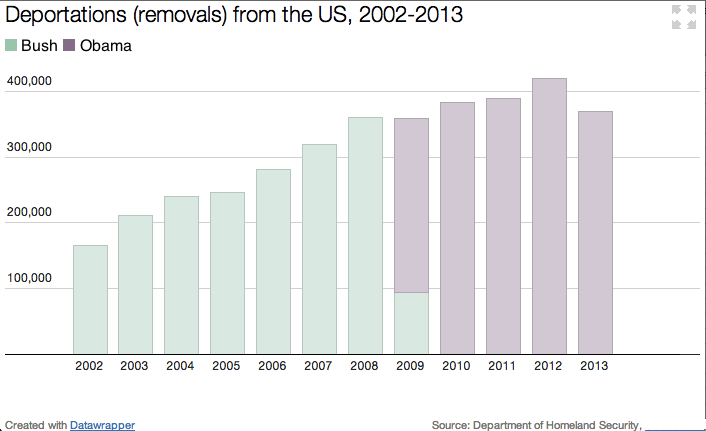 How come the number of unauthorized immigrants hasn't fallen significantly?

The number of unauthorized immigrants in the United States hasn't declined significantly since Obama took office. Why would that be, if there had been so many deportations?

One possible answer to this is that "2 million deportations" isn't the same thing as "2 million different people deported." Any time the government sends an immigrant back to to his or her home country, that counts as a "removal." So if a single individual came to the United States, got deported, came back, and got deported again — that would count as two "removals."

An even better answer, however, is that the state of the US economy, rather than the level of government enforcement, is the most important factor in how many unauthorized immigrants enter or leave the country. (See here for more.) The US unauthorized population dropped during the Great Recession and then rebounded as the US economy improved.

Who is Obama deporting?

"Recent border crossers": In 2013, two-thirds of all deportations were from the "border" of the country, rather than the "interior." Most of these, the government said, were immigrants caught crossing from Mexico.

This "border" is not what most people think of as the border. The government's definition of "border" stretches 100 miles from the actual border:

A majority of the US population lives in this "border" area. So an immigrant living in Forks, Washington, or anywhere in Florida, counts as a "recent border crosser" no matter how long he's been in the country.

"Repeat immigration violators": This is what the administration calls people who have been deported and then returned to the United States. These are often people who had settled in the US before they were deported. Studies have found that the immigrants most likely to come back after they've been apprehended are people who consider themselves Americans, have lived here for years, or have family here.

Simply being an unauthorized immigrant in the United States isn't a crime, but entering illegally is. So anyone who's prosecuted for "illegal entry," leaves, and then returns is considered a "convicted criminal" and targeted for deportation.

Unauthorized immigrants can also be deported as "criminals" for driving without licenses (which, in most states, they can't get). And the term "convicted criminal" includes a variety of smaller crimes: Experts estimate that the majority of American citizens would be considered "convicted criminals" under the administration's broad definition. 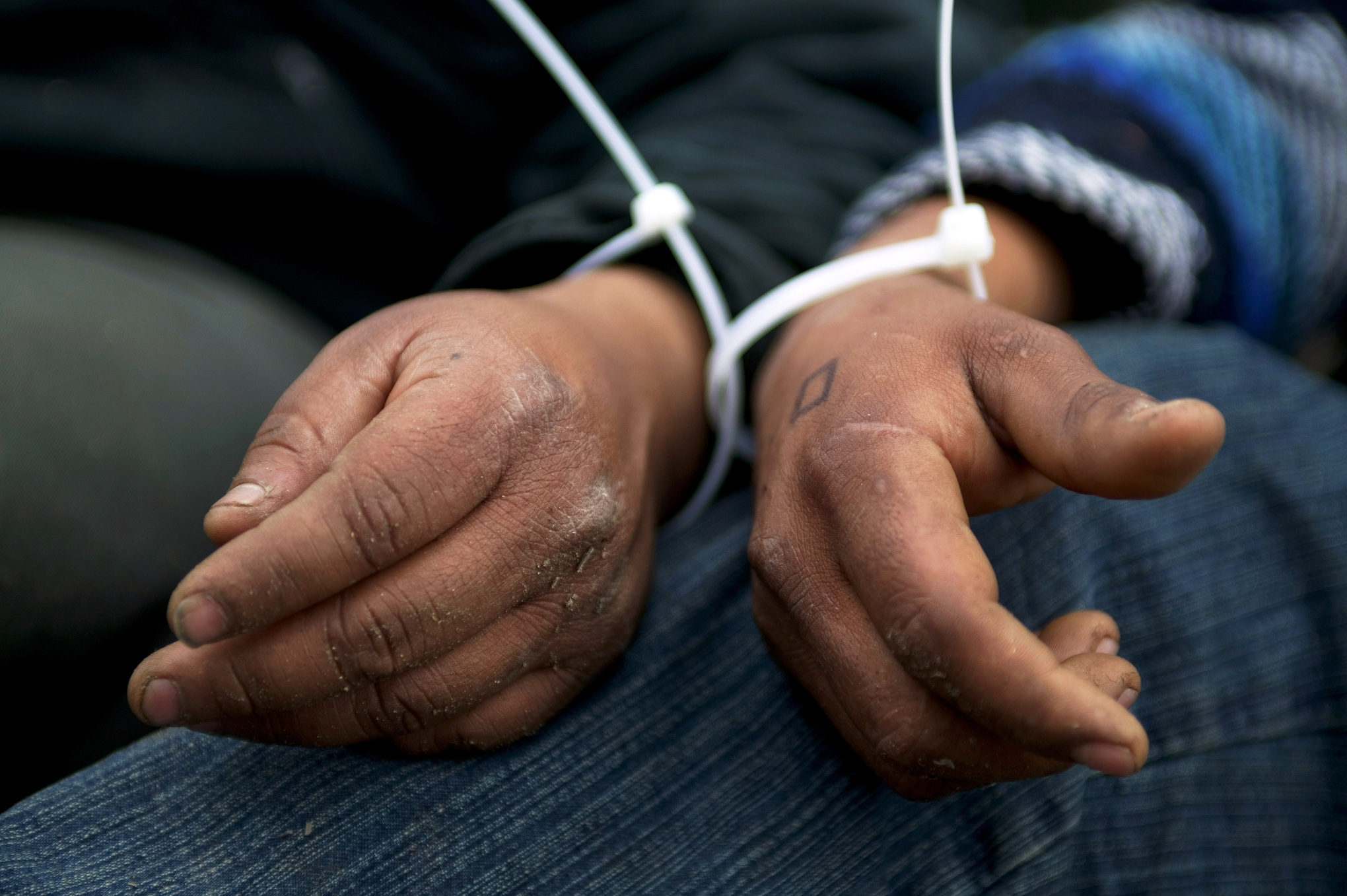 A pair of immigrants caught crossing the border in 2006. Today, they would likely be formally deported and barred from coming back legally. Robert Nickelsburg/Getty

Why do some critics think Obama is soft on deportations?

Not everyone thinks Obama is the "deporter-in-chief." Many critics of the administration, including Republicans in Congress, argue that the administration isn't nearly as tough on unauthorized immigrants as advertised.

Interestingly, the Obama administration has also tried to downplay its record on deportations at times — using many of the same arguments as its critics. On April 8, Attorney General Eric Holder told Congress, "I think the president has been unfairly labeled the deporter-in-chief."

Skeptics tend to make two arguments. The first is that most immigrants are now being removed from the "border" and hence don't really count. But as noted above, the official definition of the "border" is a huge area — and includes many people who have been living here for a long time.

Administration officials have also tried to downplay their record on deportations

The second argument is that the Obama administration is inflating the number of "removals" (the technical term for deportations) by deporting people who, in the past, would have simply been "returned" — allowed to leave on their own.

But this could suggest that Obama is getting tougher on deportations. Here's why: An immigrant who gets "returned" to his home country is allowed to apply to re-enter the United States legally. But an immigrant who is given a deportation order is banned from applying for legal status in the US for at least five years. So, by using more "removals" and fewer "returns," the administration is making things harder for deported immigrants.

The bottom line: the evidence is pretty clear. Lots of people are getting deported under Obama, and they're not just the people the administration says it wants to deport.

Why are people upset about deportations?

Because they're tearing apart American families and communities.

In 2012 alone, an estimated 150,000 US citizen children lost a parent to deportation. Immigration-rights advocates say that deporting someone who is settled in the United States doesn't just destabilize that person's family — it makes other unauthorized immigrants in the community feel threatened themselves. That makes them less likely to go to the cops if they're victims of crime, or even afraid to take their kids to school. 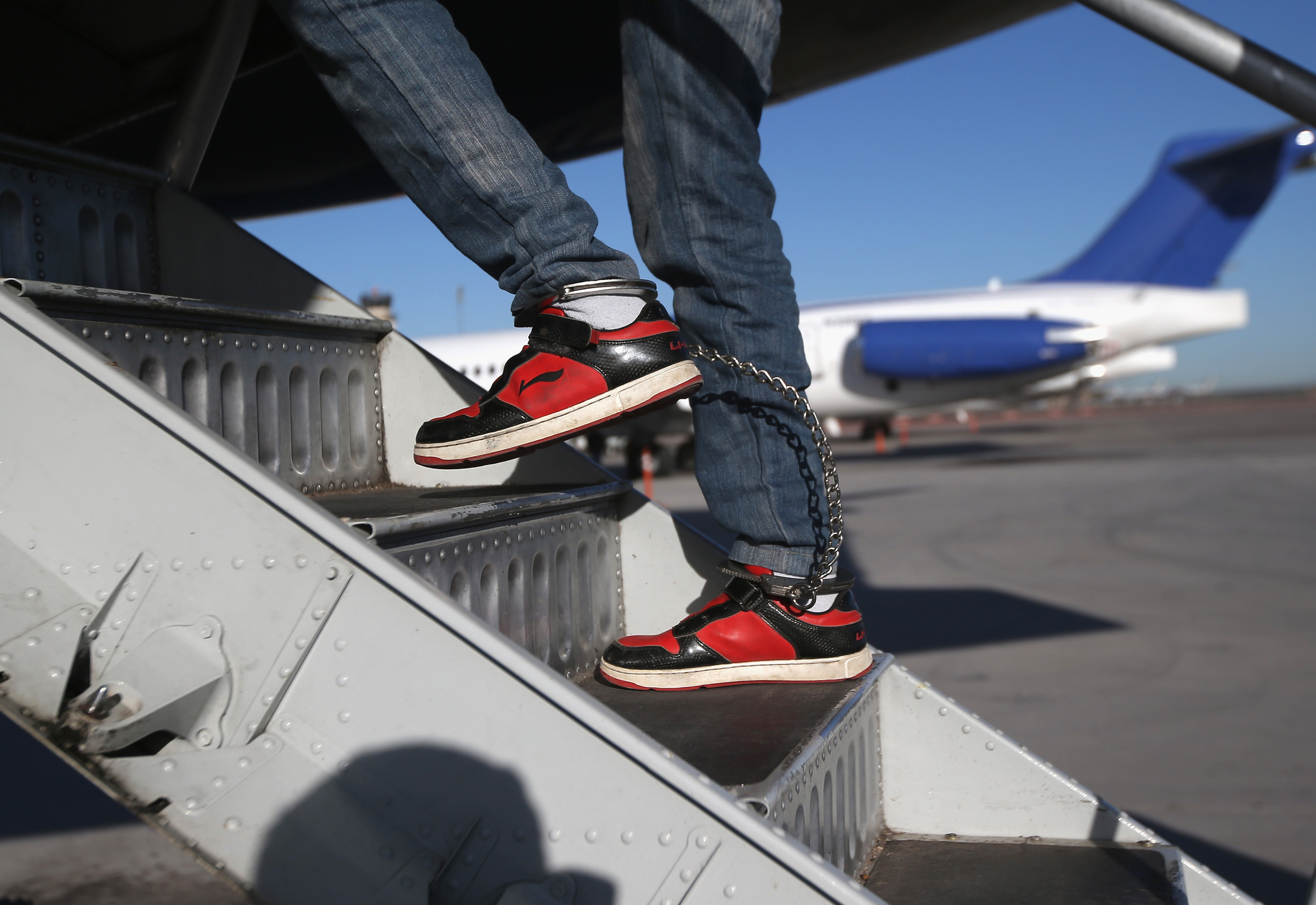 A Honduran immigrant boards an ICE plane to be deported. John Moore/Getty

Why do deportations keep increasing?

There are a few trends that have made it easier and quicker for the federal government to deport immigrants in recent years:

Fewer immigrants are getting a day in court: In theory, any immigrants facing deportation are supposed to get a hearing in civil immigration court, to make sure that they aren't eligible to stay.

Local cops are helping federal immigration agents: Under a program called "Secure Communities", which the Obama Administration has rolled out across the country, the US government uses a federal database to check the immigration status of any immigrant booked into any local jail anywhere. Federal agents then get local cops to hold the immigrant until the feds can come pick him up.

Some 306,662 immigrants were deported this way from 2008 to September 2013 — and 21 percent of them were never convicted of any crime. There's also evidence that local cops are using this program to engage in racial profiling and pretextual arrests.

The Administration also appears to be test-piloting a program called the Criminal Alien Removal Initiative. Under this program, local law enforcement can set up a checkpoint in, say, a parking lot and apprehend people who might be unauthorized. Officers can then take the people to a federal mobile fingerprinting unit to run their prints through federal databases. If the people turn out to be unauthorized, Immigration and Customs Enforcement takes them into custody.

Border Patrol is being increasingly aggressive. How is Border Patrol finding so many people to deport? By going into immigrant communities. There are reports of Border Patrol agents taking immigrants into custody after they're pulled over by local cops. Agents will also board buses and trains to ask passengers for papers. Border Patrol has even, reportedly, served as "interpreters" for local police, arresting anyone unauthorized they happen to find.

Could Obama change the system now?

The Obama administration has said repeatedly that it's not going to expand deferred action — though they also said that they wouldn't extend the program to young immigrants right up until the moment they did just that. So take that with a grain of salt. 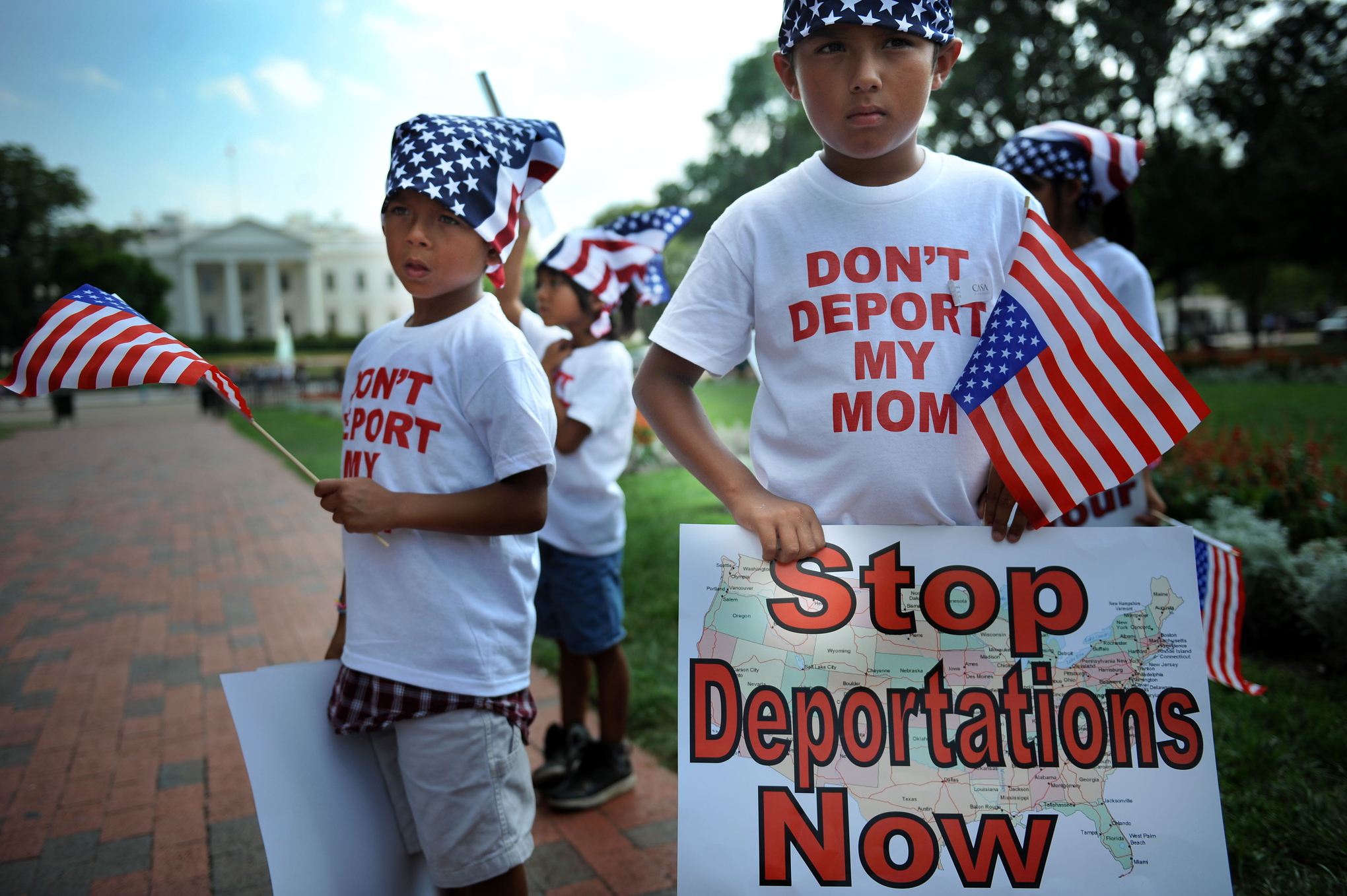 The administration has other options for reducing the number of deportations, however. The federal government could stop targeting "repeat violators" or "recent crossers" for deportation. Or it could alter its cooperation with local law enforcement so that only serious criminals, or people with convictions, get run through the federal immigration database.

Given how much the deportation machine has grown over the last decade, there are plenty of things the Administration could decide to do. However, actually implementing any change is going to require the cooperation of Immigration and Customs Enforcement, the agency responsible for deportations. And that agency has been resistant to any of the administration's attempts to go easier on any unauthorized immigrants.

Democrats have been insinuating the results of the President's deportation review will come by July 4th. That review — and its implementation — will show how much Obama can put the brakes on the deportation machine he helped build.