Europe's honeybees are vanishing — and we still don't know why

Share All sharing options for: Europe's honeybees are vanishing — and we still don't know why

Bees are dying around the world — and we still don't really know why. Last winter, commercial beekeepers in the United States lost 31 percent of their honeybee colonies. Europe has also been affected by this mysterious "colony collapse disorder."

Out of 100 major crops worldwide, 71 depend on bees for pollination

That's worrisome news for countries that depend on bees to pollinate their fruits and vegetables. The UN Food and Agriculture Organization has estimated that "out of some 100 crop species which provide 90% of food worldwide, 71 of these are bee-pollinated." So, understandably, researchers are frantically trying to figure out what's going on.

That brings us to Europe, where the European Commission just published a massive new study tracking 32,000 honeybee colonies across 17 states — the largest-ever study on honeybees and the diseases that affect them.

The good news: Many countries — like Spain, Italy, and Greece — seem to be okay. Normally, about 10 percent of bees should die off during the winter, and those countries all had lower mortality rates than that during the winter of 2012-13. In fact, the majority of Europe's honeybee hives are in these healthy countries, which indicates that the situation is better than feared.

The bad news: 11 countries all had mortality rates above the "normal" 10 percent rate — and bees in northern countries like Britain, Denmark, and Belgium seemed to be dying at very high rates: 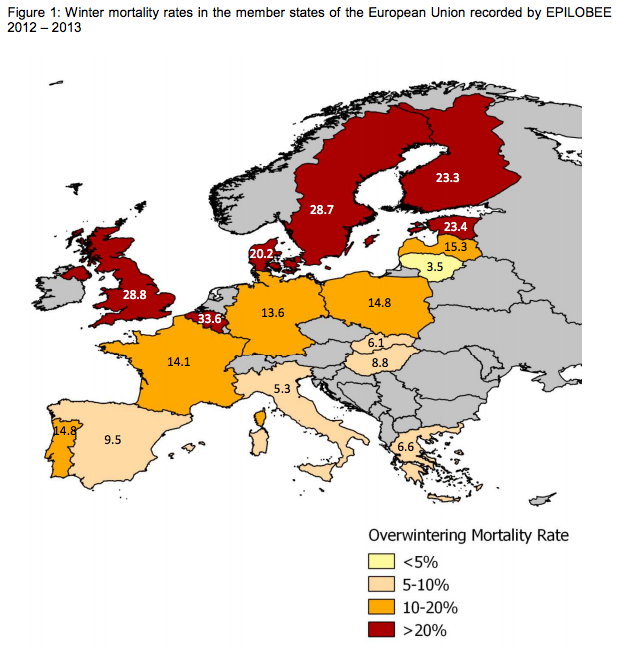 By comparison, US beekeepers lost 31.1 percent of their bees during the same winter. So the United States is in worse shape than Europe. (Although the "acceptable" rate of mortality in North America may be a bit higher.)

The still-worrisome news: While the EU study had some encouraging news on honeybees, it only looked at honeybees. But there are also reports that wild bees — which are also increasingly crucial for pollination — are in trouble, too. One recent report found that 31 of the 68 species of bumblebees in Europe are in decline, with 14 facing extinction. That's worrying.

So why are the bees dying? A few possibilities

The EU study didn't figure out why the honeybees are dying — this is just a first (important) step in collecting data. But there are a variety of proposed explanations on offer, in both this study and an earlier report put out by the US Department of Agriculture and Environmental Protection Agency in 2013:

Pests: One likely culprit is the Varroa destructor mite, which can attach itself to honeybees and spread viruses throughout the colony. Some researchers have blamed this mite for colony collapses in Hawaii and Canada. The EU study noted that the Varroa mite seems to be quite prevalent in Britain, Poland, and Latvia. But this mite can't seem to explain all deaths, and the EU is carrying out a stricter statistical analysis.

in recent years, researchers have wondered if a class of pesticides are responsible for the bee collapse

Diseases: The EU study also tried to track the prevalence of diseases and compare them with honeybee deaths. No obvious smoking gun turned up: For instance, European foulblood disease, one suspected culprit, didn't seem to be very common in any of the states studied.

Pesticides: In recent years, researchers have wondered if a class of chemical pesticides called "neonicotinoids" might contribute to the collapse of bee colonies. The idea is that even low levels of pesticides in nectar or pollen might disrupt the ability of bees to gather pollen, return to their hives, and reproduce.

The EU study did not explicitly look at this question — and this is still being debated among researchers. European regulators have already banned neonicotinoids for the next two years out of caution. US regulators, meanwhile, say that further field research "is required to establish the risks associated with pesticide exposure to U.S. honey bee declines in general." (See here for more on these contrasting approaches.)

Nutrition: Some beekeepers and researchers have argued that land-use changes — like growing suburbanization, say — have made it harder for honey bee colonies to find suitable food. The EU study didn't look into this, either.

Harsh winter: The EU notes that the winter of 2012-2013 "was particularly long and cold." So that might have been a contributing factor.

There's probably no one single explanation. As the 2013 report by the US government put it, "Consensus is building that a complex set of stressors and pathogens is associated with [colony collapse disorder]." This massive new study out of Europe is just a first step in getting a better handle on why the bees are vanishing.