In Obama's White House, women earn 89 cents on the dollar — but it's not all bad news

Share All sharing options for: In Obama's White House, women earn 89 cents on the dollar — but it's not all bad news

In a week when President Obama is pushing measures to close the wage gap, one group has raised questions of pay equity in the president's own workplace. An analysis from the right-leaning American Enterprise Institute found this week that the White House has its own wage gap of 12 percent (though the analysis initially included detailees, workers paid by other agencies who are detailed to the White House. Remove those and the gap is a hair smaller, at around 11 percent). Women working in the White House have a median pay of nearly $62,000, while the median pay for men is $70,000, according to data provided by AEI. 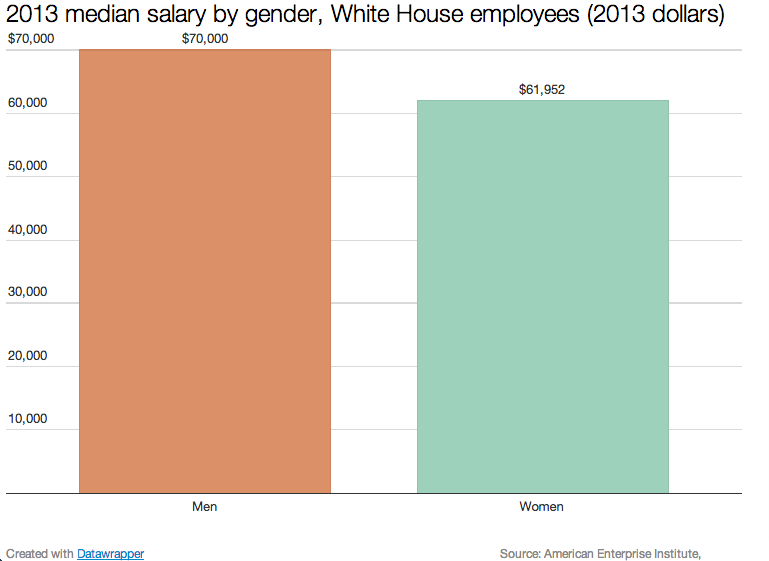 At a Monday press briefing, when asked about the numbers, Press Secretary Jay Carney responded that the White House's pay gap is better than the nationwide figure. Among full-time, year-round workers nationwide, women earn roughly 77 percent of what men earn in a year.

"What I can tell you is that we have as an institution here have aggressively addressed this challenge, and obviously, though, at the 88 cents that you cite, that is not a hundred, but it is better than the national average," he said, as reported by the Washington Post.

Republicans often say the 77-percent figure is misleading, as women economy-wide tend to work in lower-paying jobs than men.

The think tank's timing is deliberate, with the analysis coming during a week when the president is signing executive orders aimed at creating more equal pay at federal contractors and congressional Democrats will be pushing the Paycheck Fairness Act. This all coincides as well with Equal Pay Day, which falls on Tuesday, April 8. That day signifies how far into 2014 a woman would have had to work, in addition to last year, in order to earn as much as a man did in 2013.

So is the White House not living up to its equal pay promises? It is true that in his 2014 State of the Union, Obama called it an "embarrassment" that women made 77 percent of what men made, meaning 89 percent might not exactly be a point of pride.

There is no way to tell from this data why women at the White House earn less than men. White House pay is determined in part by a set scale that is based on rank, but also has some flexibility within ranks, as Slate reported in 2009. There could be any number of reasons why Information Services Operator John Click earned $45,024 in 2013, compared to Information Services Operator Cynthia McHaney's $42,000 (and why several women with the same title earn yet more).

The data does show that the White House staff does well on women's representation. According to AEI's breakdown of White House workers by gender, women accounted for 49 percent of 433 employees as of 2013. While that may not be remarkable, given that women make up over 50 percent of the population, it is notable in the sense that high-pay workplaces tend to be male-dominated. Median White House pay is $65,000, or around $1,250 per week. According to jobs for which the Labor Department has data, among the 47 jobs with median weekly pay of more than $1,250, there are only 13 in which women make up 49 percent or more of the workforce.

In addition, by virtue of the fact that it reports its salaries to Congress, the White House at the very least lives up to one of the executive orders Obama will sign on Tuesday, aimed at pay secrecy. That order says federal contractors can't retaliate against employees talk about their pay. When you're the White House and have to release your pay in a spreadsheet for public scrutiny, pay secrecy is impossible.