Youth unemployment is a huge crisis, Germany may have the solution

Share All sharing options for: Youth unemployment is a huge crisis, Germany may have the solution

Youth unemployment in the United States is an absolute disaster right now. Check out this chart showing the unemployment rate for 20-24 year-olds who aren't enrolled in school: 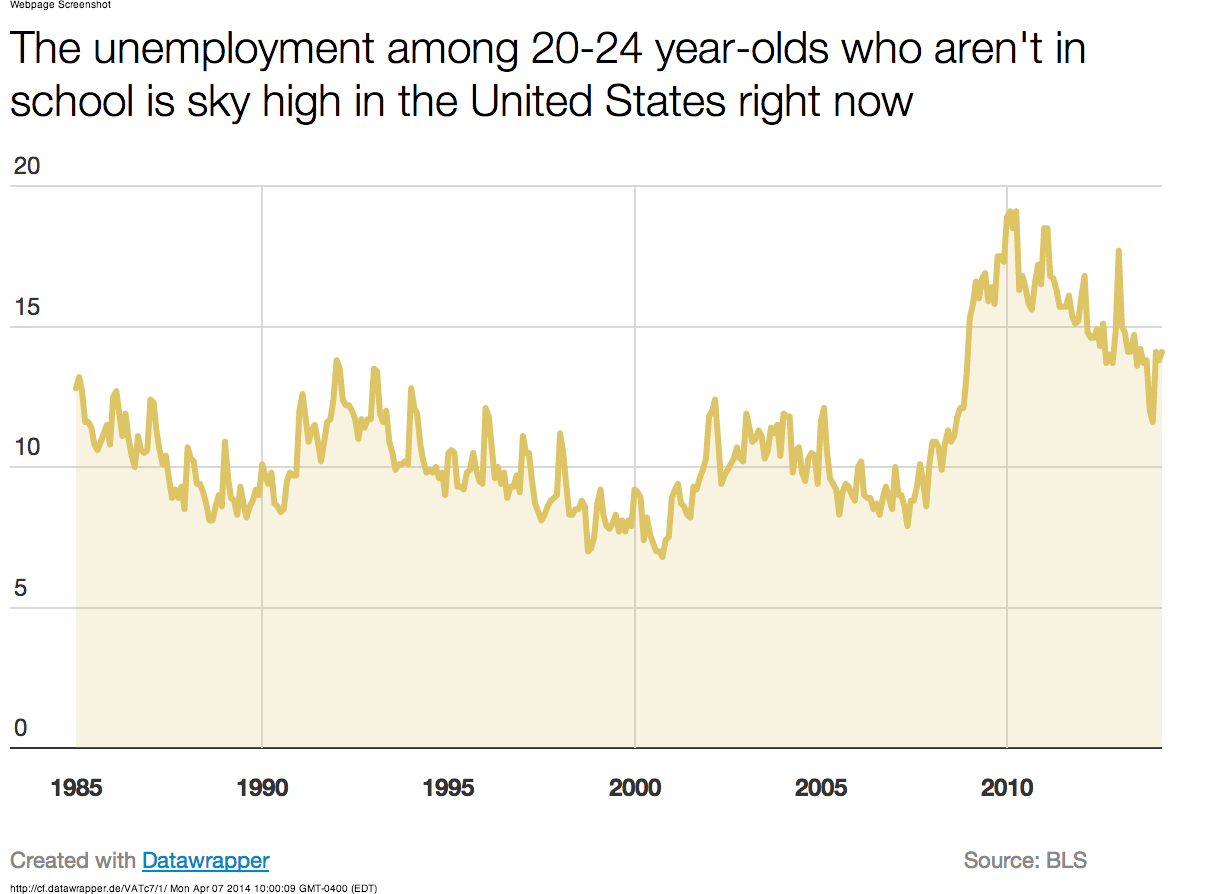 This is much higher than the national average unemployment rate, and because it's afflicting young people it's likely to leave life-long scars on their earnings potential and on the American economy. A smart Brookings analysis from Joseph Parilla and Alan Berube suggests that the United States might want to look to look to Germany for some answers since Germany's 8 percent youth unemployment rate is massively lower than the American or European Union average.

Of course Germany has a whole has a lower unemployment rate than the United States — 5.1 percent versus 6.7 percent — but the youth unemployment gap is larger than the overall one.

The biggest and most salient difference in terms of youth labor market policy between the United States and Germany is that Germany takes vocational education seriously. In the US, vocational schooling became stigmatized as a way of shortchanging some kids' potential so we shifted to a mentality that's notionally focused on the idea of sending everyone to college. But of course we don't send everyone to college and in fact have lots of people dropping out of high school. As Berube and Parilla write, German vocational education is a serious option that "blends classroom education with on-the-job training through apprenticeships, equipping young people not bound for university with practical labor market skills."

These apprenticeship programs have gained a lot of interest in the United States from political and business leaders, and Dana Goldstein wrote a great article a couple of years ago about German-owned firms with US-based plants teaming up with community colleges to try to bring the model to our shores.

Germany doesn't just have different education policies from the United States. Those policies are embedded in a very different approach to labor markets. Germany has strong labor unions, with workers represented on corporate boards of directors.

"German companies are mandated to join the country's network of chambers of commerce," write Berube and Parilla, "they train workers based on a system of nationally-established and portable certifications, elements that do not exist in the United States."

That is to say that at least in the manufacturing sector, the German economy is a much more collaborative enterprise than the American economy. Employers group together in what would probably be considered illegal cartels in the United States to work with government officials to define what kinds of certifications and training programs they need. But that strong employer-state collaboration is tempered by a much more powerful voice for organized labor than exists in the United States. In America, if a bunch of employers got together with the local schools to start providing a captive low-wage workforce for major area employers we wouldn't consider it useful job training — existing workers would consider it a threatening effort to gut their living standards.

Germany's stronger representation for workers in corporate affairs creates a forum in which a mutually beneficial partnership can be worked out. America's more contentious labor-management relations and ideal of a more arms-length relationship between business and public sector institutions has a lot of advantages, but it makes it difficult for the education system to be directly responsive to employer needs.

Notwithstanding the substantial differences between the US and German educational landscapes, the Obama administration is determined to press ahead with a version of German-style bridge building between schools and the workplace. On April 7, the White House announced a series of grants to local education institutions

In many ways these initiatives serve to underscore how far the United States is from the German model. The local grants are highly fragmented, and even though the program is centrally directed it they don't reflect anything like a coherent set of national standards. But then again, a grant program is something the Obama administration can do. A comprehensive restructuring of business-state-labor relations in the United States isn't.