Share All sharing options for: Obama's executive orders on equal pay for men and women, explained

What exactly will Obama's orders do?

One order will address pay secrecy — the practice of employers discouraging or prohibiting employees from discussing their pay levels. That order will prohibit federal contractors from retaliating against employees who talk about their pay with each other.

The other order would have the Labor Department set requirements for contractors to submit summary data on pay by race and sex.

What are federal contractors, and why does the order only affect them?

Why is pay secrecy a problem?

When employees do not know what their coworkers are paid, it can be easier for pay discrepancies between genders or racial and ethnic groups to happen. This issue famously came into the news with the case of Lilly Ledbetter, whose name became ubiquitous within the equal pay fight with the 2009 Lilly Ledbetter Fair Pay Act. Ledbetter worked at Goodyear for 19 years before an anonymous note let her know that she was being paid up to 40 percent less than her male peers. The act that bears her name, however, does not address pay secrecy, instead focusing on the statute of limitations for complaints about unfair pay.

The practice of pay secrecy also appears to be widespread. Around half of all employees said their employers discouraged or prohibited them from discussing their pay, according to a 2010 survey from the Institute for Women's Policy Research, a women's advocacy group.

in one survey, Around half of all workers said their employers discourage or ban workers from discussing their pay.

There are arguments for pay secrecy, however. Some argue that being too open with pay information can lead to low employee morale, and that some factors that affect pay decisions are tough to quantify.

How many people will the orders affect?

The government does not keep an official count of the the number of people who work for federal contractors, as the National Employment Law Project points out in a 2013 report. That means estimates vary, ranging up to one-quarter of the total U.S. workforce. And according to the White House, all employees at all companies receiving a federal contract will be affected by the orders.

The largest contractors are mostly defense contractors like Boeing and Lockheed Martin, according to the Federal Procurement Data System. But other contractors cover a wide range of industries and, as of 2013, included the Massachusetts Institute of Technology, Pfizer, and Federal Express.

Why is Obama issuing these orders?

President Obama has championed pay equity since the beginning of his administration. The first bill Obama signed into law as president was the Lilly Ledbetter Fair Pay Act, which made clear that any worker who feels she has been paid unfairly due to discrimination has 180 days after her most recent paycheck to challenge the discrimination. He has also brought up the issue of gender pay equity in the last three State of the Union addresses.

Obama is now promoting the Paycheck Fairness Act, which the Senate will debate this week. Like the two orders he is signing, that bill would ban employers from retaliating against employees who discuss their pay and would also have the Labor Department collect data on employers' pay by race and gender. However, the act would apply to virtually all employers, not just contractors, and contains other provisions like allowing plaintiffs to seek punitive damages from employers.

In this way, the new orders mirror an order that Obama signed in February, in which he raised the minimum wage for all new federal contracts to $10.10 per hour. In that case, Obama ordered a more limited version of a law that he would like Congress to pass. The president has proposed that Congress raise the federal minimum wage from $7.25 per hour to $10.10 per hour, but many Republicans are opposed to that measure.

There are political motives behind these moves as well. Democrats have latched onto equal pay as a key issue to rally voters ahead of the 2014 midterm elections. The president has also framed his minimum-wage push as a women's issue, as women make up more than 60 percent of people working at or below the minimum wage.

More broadly, the move signifies that President Obama is willing to move on issues he believes in, with or without Congress. In his 2014 State of the Union address, Obama called this year a year of action in which he planned to advance his agenda without help from Congress, where Republicans have blocked many of his proposals.

The timing is also significant: he is signing the orders on Equal Pay Day, the day that symbolizes how far into 2014 a full-time working woman would have had to work for her 2013 earnings to equal what a man earned that year.

What are some objections to these new equal pay measures?

The Republican National Committee argued in a recent memo that it is already illegal to discriminate based on gender. It also says that the bill "will make it nearly impossible for employers to tie compensation to work quality, productivity and experience." However, the Equal Pay Act of 1963 already contains provisions that allow employers to justify differing pay levels for these and other reasons.

Republicans argue that it is already illegal to discriminate based on gender.

Executive orders are very common, regardless of the president's party, and every president has used them. 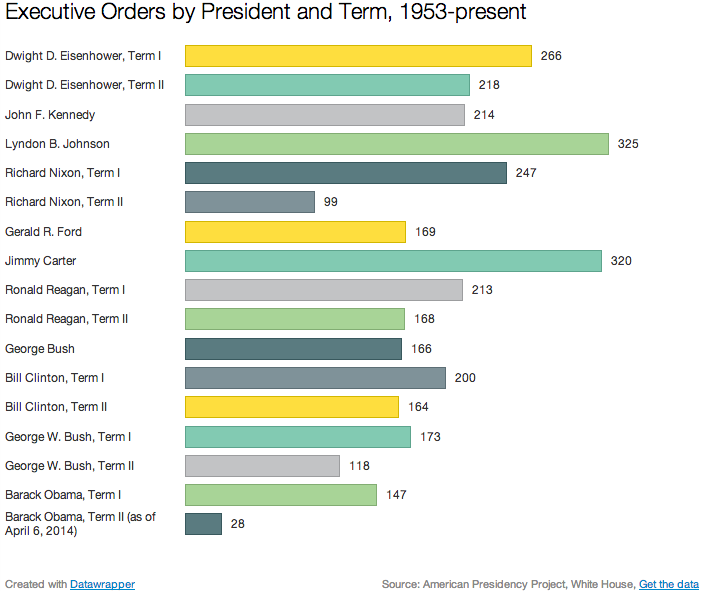