If you want to understand what's going on in Game of Thrones, just ask yourself what George W. Bush would do.

"Either you are with us or you are with the terrorists" wasn't just a rhetorical device. Though it's easy to forget now, that was the Bush Administration's actual national security strategy until well into the Iraq War. He made waging preventative war on any state that might sponsor a terrorist attack on the United States into official US policy, a radical revision that committed the US to war with any state that didn't cooperate with it against terrorist groups.

It's also a perfect encapsulation of the foreign policy of one of Game of Thrones' best characters.

There's been a case for this since at least last season, but her actions in the fourth season premiere cement it. Her approach to foreign policy and making war, as laid out in this episode, is Bushian to a tee.

The creators started subtly selling us on this idea in the pre-season trailers, in which Daenerys haughtily declares: "Let the priests argue over good and evil. They can live in my new world or die in their old one." If that sounds familiar, it should. It's virtually identical to a famous quote from an anonymous Bush official, commonly attributed to Karl Rove: "We're history's actors... and you, all of you, will be left to just study what we do."

Last night, it became clear that this parallel wasn't accidental. Daenerys begins the episode on a march to Meereen, the only major hub of the local slave trade she has yet to sack. It's a clasically Bushian preventive war. All state sponsors of slavery must be destroyed before they can pose a threat to what she describes as her "army of former slaves." 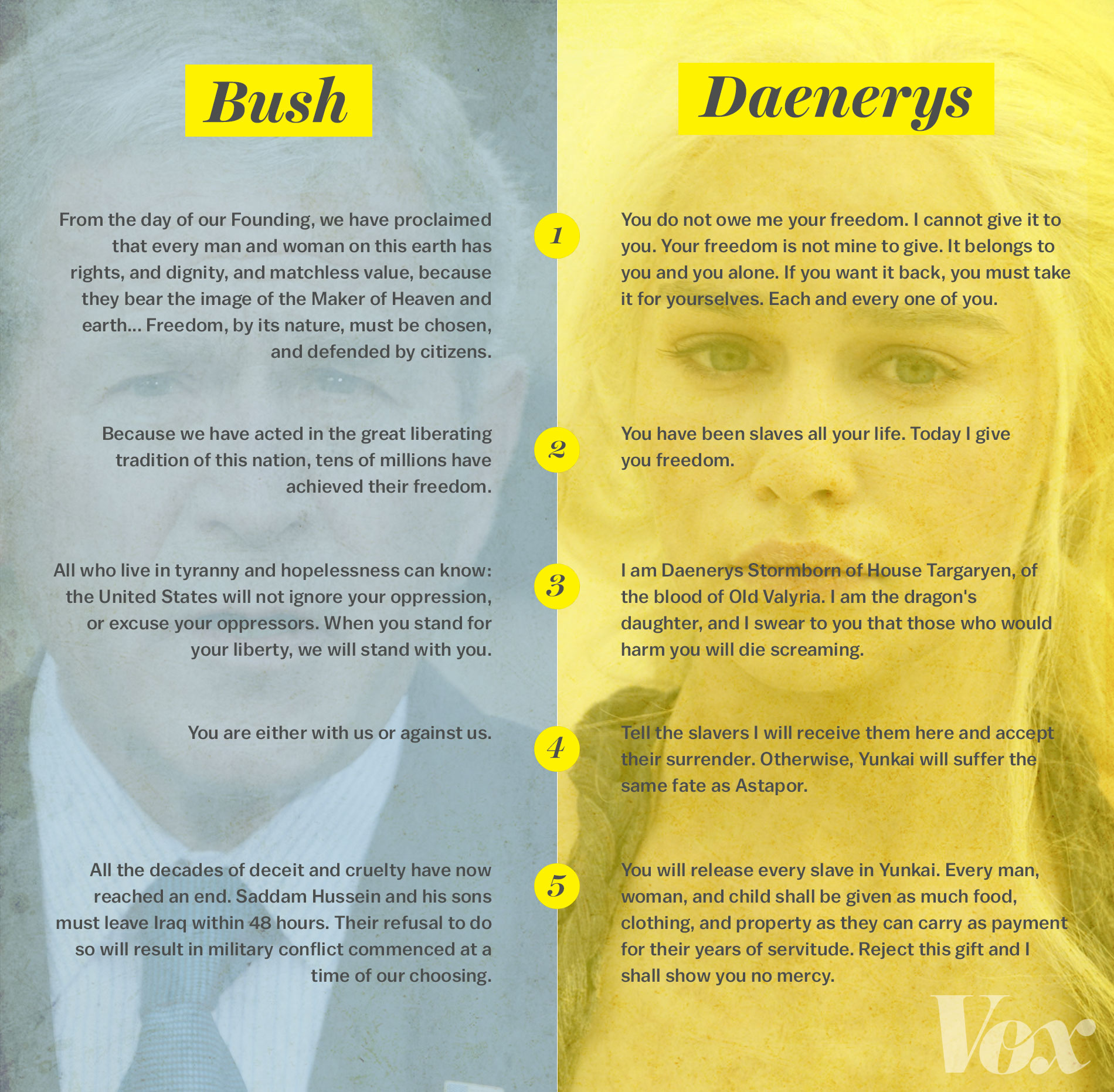 Moreover, Daenerys, like Bush, thinks in ideological terms. Her principal enemy isn't a hostile king or a rival family: it's an evil practice, slavery, a point she makes clear when she tells her army to "remove the collar" from the neck of a murdered slave they encounter on the road.

As Bush put it in his Second Inaugural: "Across the generations we have proclaimed the imperative of self-government, because no one is fit to be a master, and no one deserves to be a slave." Daenerys couldn't agree more. She even has her own Axis of Evil: Meereen, Yunkai, and Astapor are a Slaver's Bay replay of Iraq, Iran, and North Korea.

The Khaleesi doesn't just think about going to war like Bush: she also fights them like he did. Under Bush, the Defense Department developed an approach to warfare that emphasized airpower, technology, and small deployments of ground troops. Daenerys, who barely even had soldiers until the middle of last season, did something similar. Only instead of airplanes, she had dragons. Awesome, awesome dragons. 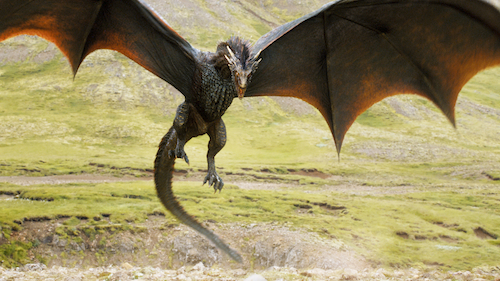 While Daenerys is clearly the heir to Bush's throne, she's hardly the only Game of Thrones character to think like him. Bush's basic friend/enemy, "with us or against us" approach pervades the way most characters with power approach their political struggles.

Take the central plotline, the struggle for control of the Iron Throne. The fight between the noble Houses is conducted in starkly familial terms. "Everyone who isn't us is an enemy," Cersei Lannister says to her son Joffrey, introducing him to the defining code of the Westerosi nobility. Friends are other families who fight with you against hostile Houses; hostile Houses must be destroyed. There is no neutral.

Interestingly, the author of the books, George R.R. Martin, was a conscientious objector during the Vietnam War. He explicitly intended for the series to deconstruct the fiction of a "glorious war," and much of the show's tragedies are caused by their characters' shortsighted preoccupation with destroying their enemies.

So given the show's bleak outlook, don't expect any kind of happy ending for its leading characters. Most of them will likely end up feeling a lot like Bush - circa 2008.