Some websites and computer programs hide secret messages for people who know where to look. 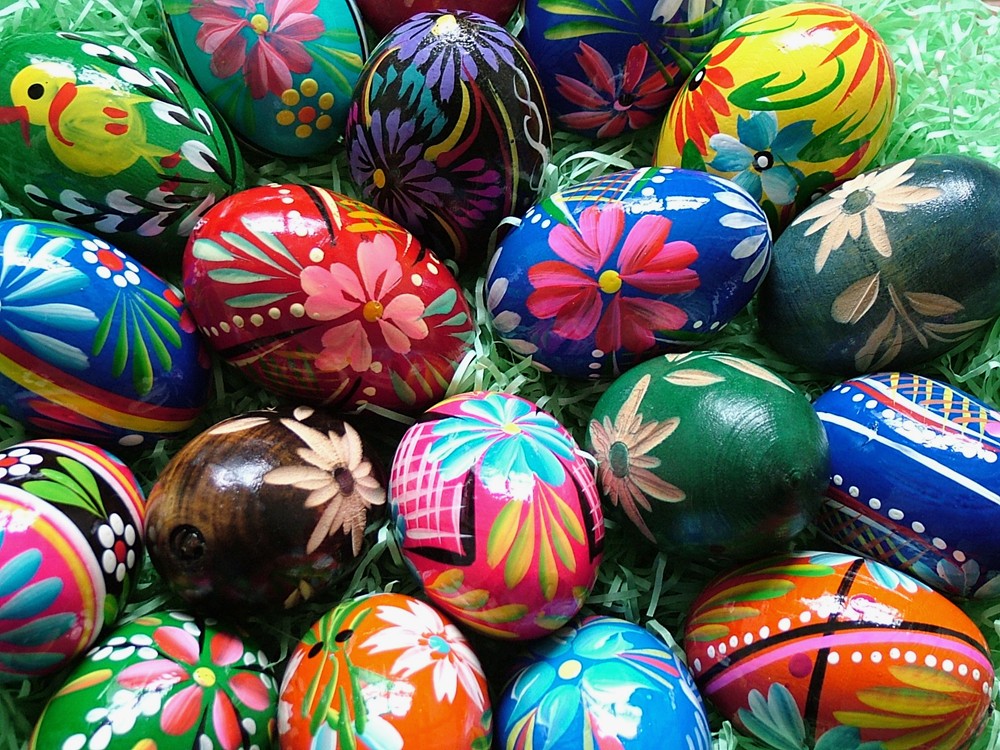 In some countries, Easter eggs are hung from trees or otherwise used as decorations. In other countries, eggs are hidden outside for children to find. Another common activity is the Easter egg roll, in which eggs are rolled down hills, or along a flat stretch of ground with a spoon. In the United States, the president hosts an annual Easter egg roll at the White House.

Easter eggs are especially elaborate in Eastern Europe, where there is a rich folk tradition of painting complex patterns onto the eggs.

While Easter eggs have traditionally been actual eggs, imitation Easter eggs have become common in recent years. Chocolate Easter eggs are widely available in stores during Easter season, and parents can also buy hollow plastic eggs that hold candy or other treats for children who find them.

An Easter egg is the practice of hiding secret content in a video game, website, or other computer software. Easter eggs can be enabled by a seemingly random sequence of keystrokes or a secret phrase.

Easter eggs provide an opportunity for the ordinary programmers and designers who create a software product to express themselves. Sometimes Easter eggs are added to a product without the knowledge or approval of senior management (hi, Jim!).

Where does the term "Easter egg" come from?

The first Easter egg was created by Warren Robinett, a programmer at the video game company Atari. In the 1979 Atari game "Adventure," a specific sequence of moves allowed the player to enter a secret room that contained the phrase "Created by Warren Robinett." Reportedly, Robinett's colleagues at Atari coined the term "Easter egg" to describe hidden features in video games and other software.

The feature wasn't approved by Atari management. Video game cartridges had very little space in 1979, so they generally didn't include credits for game designers.

"I figured the powers that be would not be happy about that little trick, and would remove it from the game as soon as they found out that the signature was in there," Robinett has said. "By the time some kid or kids had discovered the secret room and Atari found out, I didn't work there any more. So they couldn't really punish me, and the manager of game software at that time decided little hidden surprises in games, which he called 'Easter eggs,' were kind of cool."

What is the Konami Code?

The Konami Code is a sequence of keystrokes that allows players to enable special features in video games made by the Japanese company Konami. It became widely known among American gamers thanks to Contra, a video game that was released for the Nintendo Entertainment System in 1988. Entering the Konami code during the opening sequence of Contra allowed a player to play with 30 lives instead of the standard 3.

The Konami Code has become one of the software industry's best-known Easter eggs, and as a result it has become widely imitated. For example, in 2009 entering the code on the ESPN website triggered an explosion of hearts and unicorns. Digg, Facebook, and Google Reader also had Konami Code Easter eggs around the same time.

What are some famous Easter eggs?

Several major technology companies (or their employees, anyway) have introduced Easter eggs into their products:

Which company loves Easter eggs the most?

Google has a good claim to that title. Google's website has numerous Easter eggs.

For example, search for "do a barrel roll" and you'll get... Actually, we don't want to spoil it for you. Just click the link.

In 2013 YouTube marked the 57th anniversary of the VCR by allowing users to watch videos with the quality degraded to mimic a low-quality video tape. Or try typing "1980" on a video page to reveal a version of the classic video game Missile Command.