Share All sharing options for: The Republicans’ plan to cut Medicaid, explained

There's much in health-care policy that divides Republicans. But there's one major idea that unites them. Block grants for Medicaid. It's was in Rep. Paul Ryan's budget. It was in Mitt Romney's presidential platform. And it's at the core of Senate Republicans' new budget proposal, the Wall Street Journal reported Monday.

In its simplest form, turning Medicaid into a "block grant" simply means handing control of the program — and the funding for it — over to the states. But in all these plans the details reveal something else, too: a massive cut to Medicaid spending that could throw tens of millions of people off the program. To understand how that works, you need to understand the unusual way that Medicaid works.

Right now, states split the cost of Medicaid with the federal government

Medicaid, the federal entitlement program that covers low-income Americans, is perennially the largest item in state budgets. Medicaid spending is shared between the federal government and states, with each paying a set percent of each beneficiary's costs. In return for the federal match, states must meet certain requirements for coverage set by the federal government.

The federal/state split varies from state to state, with the feds footing a higher percent of the bill in states where people earn less. That's why in Mississippi, for example, the federal government pays for 74 percent of each beneficiary’s costs but only 50 percent in Massachusetts.

Medicaid pays this amount regardless of how many people are on the program. In that way, Medicaid is an open-ended funding commitment to cover a set percent of enrollees’ bills. When the need for Medicaid rises — like during a recession, or a particularly bad flu season — the federal government is committed to meeting it.

A block grant would limit the federal government's commitment

Instead of paying a set percentage of each enrollee's bill, they would pay a specific amount to each state. It would then be up to the states to figure out how to best spend those funds.

"It sets an agreement that this is the amount of money you're going to spend and there should be no surprises," says Tony Keck, who directs South Carolina's Medicaid program and supports block grants.

A block grant would limit the feds' commitment to Medicaid

Block grants are typically meant to save the federal government money. The one in the House Republicans’ 2012 budget, for example, was estimated to cut $800 billion in Medicaid spending over a decade (about a third of the overall budget). In return for accepting less money, block-granted states would get additional flexibility to decide how, exactly, Medicaid dollars get spent.

"Everybody's proposal is slightly different, but at the end of the day, it's a fixed sum of money," says Deborah Bachrach, who previously ran New York's Medicaid program and is currently a partner at the law firm Manatt, Phelps and Phillips.

But it's certainly possible to give state governments more flexibility to implement changes to Medicaid without also slashing federal spending on the program. If it wanted to, the federal government could double Medicaid funding and call it a block grant — but that's not what typical proposals do.

Most recent block grant proposals — including those from Jindal and Budget Chair Paul Ryan (R-WI) — would cap Medicaid spending, only allowing spending to grow due to inflation and population growth. That usually amounts to about 3 percent growth on average, the Bipartisan Policy Center notes. By contrast, Medicaid has typically grown at 7 percent annually.

The Wall Street Journal has reported that the Senate Republicans' new proposal would reduce Medicaid spending by $732 billion over the next decade.

Separately, the Bipartisan Policy Center had analyzed Congressional Budget Office numbers on the Ryan's block grant proposal in 2013, and estimated it would cut Medicaid spending by $160 billion in 2022. That's about a third of the expected budget that year, without block grants.

The Jindal proposal, which set a similar spending target, would likely have similarly sized cuts. This isn't true of any block grant proposal, but instead is specific to the way that the Jindal and Ryan plans are structured.

How could states handle those cuts?

That's the $732 billion question. The Kaiser Family Foundation assessed the block grant proposal in Ryan's 2012 budget and estimated that it would mean between 14 and 20 million fewer people receiving Medicaid by 2022. There's no similarly granular version of the Senate Republicans' plan yet to allow outside experts to do this type of analysis.

"I've got state plan amendments to make simple changes, in theory, that the federal government should want to happen," Keck says. "I want to bring dietitians into the program, but that's been held up for a year."

"We could be delivering better services if we weren't stuck waiting."

Keck says he would gladly accept quality metrics — a requirement to, for example, reduce infant mortality — as part of a block grant agreement. That would curtail states trying to hit the spending metric by simply not providing care.

Block grant opponents don't think the savings are possible without harming benefits, either by dropping people off the program or cutting into the benefits they receive. A block grant system would be very different from the current Medicaid program where all people in certain categories — low-income, pregnant women, for example — are guaranteed access to the program. There are mandatory groups of people states have to cover.

"The administrative costs of Medicaid are the lowest of any insurer in the country," says Bachrach. "You can't do the cuts through administration. And if more primary care and community-based services could save 30 percent, we would have done that already."

The details of who states could and couldn't cut — and how much they could alter the benefit package — aren't spelled out in a lot of block grant proposals, which makes it difficult to predict how, exactly, states would react to the new funding system.

"If you're going to cut spending that much, you're going to need to give governors tools to do it," says Joan Alker, executive director at the Georgetown Center for Children and Families. "It might be waiting lists or enrollment caps. People can't have a guarantee of coverage unless there's an assurance of open-ended federal funding."

The nonpartisan Congressional Budget Office, for its part, is skeptical that states could increase efficiency enough to offset the spending cuts.

"If states were given additional flexibility…they might be able to improve the efficiency of those programs in delivering health care to low-income populations," the agency wrote in its 2012 analysis of the Ryan budget. "Nevertheless, even with significant efficiency gains, the magnitude of the reduction in spending relative to such spending in the other scenarios means that states would need to…make considerable cutbacks."

Medicaid's costs as a program are growing, but when measured per person have been nearly stagnant for over a decade.

The cost of the total Medicaid program grew by 3.3 percent in 2012, which was about a half-percent faster than the rest of the economy (and hovered around the growth rates of Medicare and private insurance).

When measured on a per-person basis, Medicaid's costs have held stable for over a decade. That means that holding enrollment constant, Medicaid's spending is growing much more slowly than private insurance and Medicare: 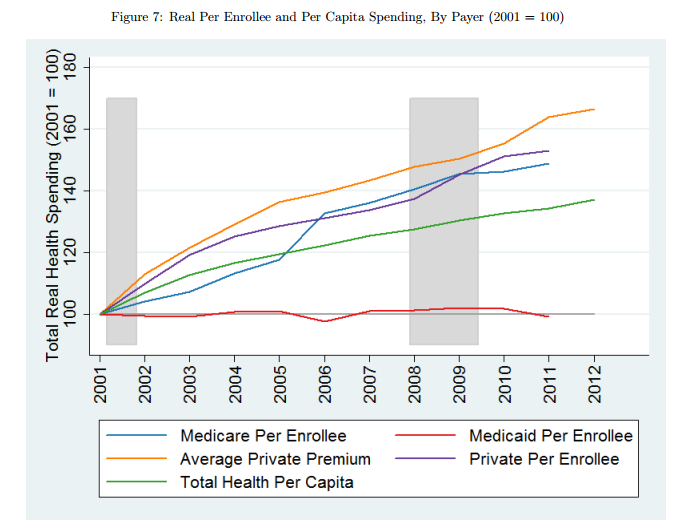 "There were days I would have given anything for more flexibility and less regulatory oversight."

There are definitely things that states can't change about Medicaid: they can't cap enrollment for certain populations, like low-income children women who are pregnant or the blind and disabled who fall under certain earning thresholds.

At the same time, there does seem to be a lot of space for experimentation. Indiana, for example, runs a Medicaid program that requires enrollees to pay a monthly premium, like in private insurance. Oregon is using budget caps to try and drive down its health care spending. And in Arkansas, the state is using Medicaid dollars to buy beneficiaries private health insurance plans.

All of those types of changes, however, require a sign-off from the federal government — which Medicaid directors note can be a frustrating process that takes years.

"There were days I would have given anything for more flexibility and less regulatory oversight," says Bachrach. "But that's essentially the quid pro quo of matching dollars. It's a pain in the neck, but the dollars are worth it."

Keck is less sanguine about the hold-ups that federal approval can cause.

"They're holding us up, and it's difficult to get the approvals," he says. "The assumption about block grants is that states are just going to be bad to their citizens, and we can't trust them. But I think we could be delivering better services if we weren't stuck waiting."