Share All sharing options for: Report: Many haven't paid their Obamacare premiums

Obamacare might not be doing as well as the White House reported.

Only two-thirds of people signing up on Obamacare's exchanges paid their premiums as of April 15, the US House Energy and Commerce Committee reported Wednesday. If true, that means one-third of people on the exchanges had not completed the final step to actually obtaining health insurance in time for the committee's report.

The Obama administration, however, quickly issued a rebuttal to the report.

"These claims are based on only about half of the approximately 300 issuers in the Federally-facilitated Marketplace and they do not match up with public comments from insurance companies themselves, most of which indicate that 80 to 90 percent of enrollees have paid their premium," a Health and Human Services spokesperson wrote in an email. "Additionally, given the significant surge in enrollments at the end of March, it stands to reason that not all enrollees would have paid by the date of this so-called report since many people’s bills were not even due yet."

The committee's report also said that only 25 percent of paid enrollees are within the crucial age range of 18 through 34. Younger adults are perceived as more desirable in insurance pools because they use less health care and, as a result, hold down prices and premiums. The White House, for example, wanted the insurance pool to be 39 percent young adults between 18 and 34. 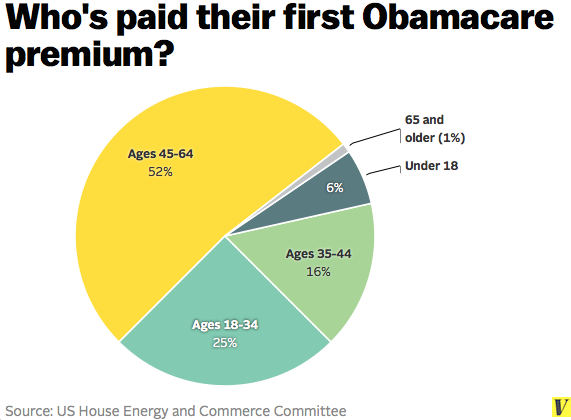 The data is in conflict with previous statements from the Obama administration: HHS Secretary Kathleen Sebelius previously said insurance companies told her that about 80 to 90 percent of people initially signing up for Obamacare paid their premiums.

The committee claimed it obtained the data through direct correspondences with every insurance provider on Obamacare's federal exchange. It plans to get updated data by May 20.

But the data doesn't include the 16 exchanges run by state governments, which might have different age breakdowns.

The Associated Press also reported that the committee didn't capture late signups in March, which surged as the March 31 enrollment deadline neared. Many of those people would not have had time to pay their bills by mid-April, and they might skew younger than the committee's numbers suggest.

Update: I updated the story to add and reflect a comment from the White House.