To them, more medical spending is proof that Obamacare is working: more people are getting health insurance, so they're using more medical care.

Most of the data – both from the federal government and private research firms – shows that health care costs are rising because people are using more medical services. At the same time, health care prices – how much a hospital charges for a knee replacement, for example, or an MRI – are growing slowly.

"A lot of the utilization was people who didn't have health insurance who are now able to go to the doctor and afford drugs," says Jason Furman, chair of the Council of Economic Advisors. "That's a good thing for families and was a goal of the Affordable Care Act."

Health care prices, meanwhile, grew slowly in the first quarter of 2014. They rose by 0.5 percent – about one-third of the rate of overall economic growth. This essentially means that people can buy more health care for their dollar now than they could last year.

"There's no doubt prices are higher than many people would like, but the news in today's release is that they're growing more slowly," Furman says. "If you had coverage last year and still have coverage this year, you could buy more health care and not have to spend more."

Ever since the Affordable Care Act became law, budget forecasters began projecting that there would be a significant increase in health care spending in 2014. Most recently, actuaries at the Centers for Medicare and Medicaid Services projected that health care costs would grow 6.1 percent in 2014 (the grey bars below represent historical spending data and the yellow bars show federal projections). 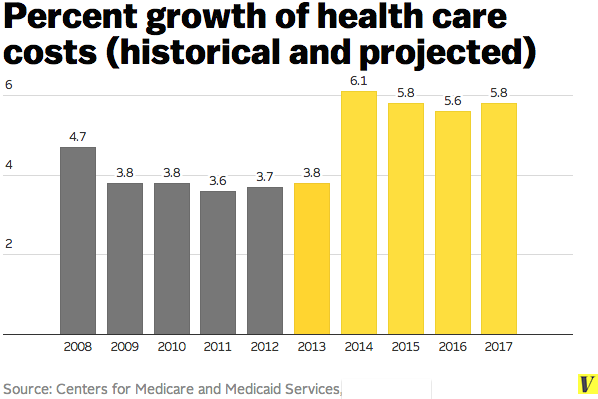 There's a long history of health economics research showing that when people get health insurance, they use more health care. So it makes sense that health costs would grow when millions were getting health insurance for the first time.

But the spending growth also predates the Obamacare expansion 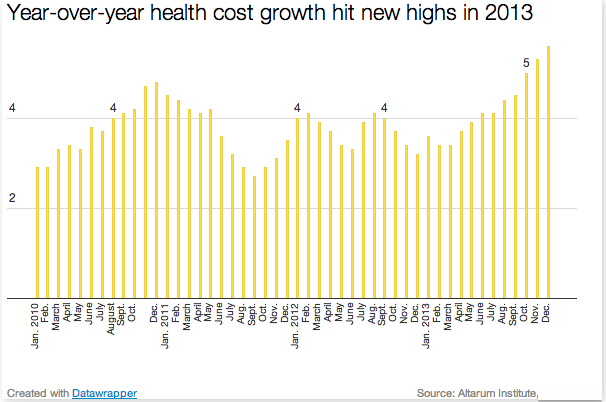 This was happening at the same time that Gallup was showing an increase in the number of people without health insurance, suggesting that something other than more people gaining coverage was driving faster growth in 2013. Instead, it was likely people who already had health insurance using more care.

One important fact we don't know is whether the increase in health care care is making people healthier. We don't know the balance between care that people need (which they might have put off because they were uninsured) and care that was unnecessary, but still made accessible because of new health plans.

"When the quantity of some good goes up that's generally a good thing because people are buying more of the things they like," Furman says. "With health care we care about outcomes. You'd want to understand the degree to which utilization is good utilization or unnecessary utilization."