LA Clippers' owner Donald Sterling dug himself further into a hole last night in an interview with CNN's Anderson Cooper, lashing out in various absurd ways at Magic Johnson, and denying he's a racist before observing that the problem with "the African-Americans" is that "they don't want to help anybody." Sterling has been banned for life from the National Basketball Association, and NBA commissioner Adam Silver is seeking to force him to sell the team, a move that could cost his heirs a couple of hundred million dollars in taxes by denying  them the lucrative stepped-up basis tax loophole.

But egregious as Sterling's conduct is, his downfall is fundamentally a feel-good story about how America is becoming less tolerant of blatant racism. But a different, less happy, story about racism in American was published in April on Vox. The story, by Evan Soltas, dealt with a study undertaken by the consulting firm Nextions at several law firms in New York City.

It turns out that opinions of the quality of the memo were heavily influenced by perceptions of the race of its author: 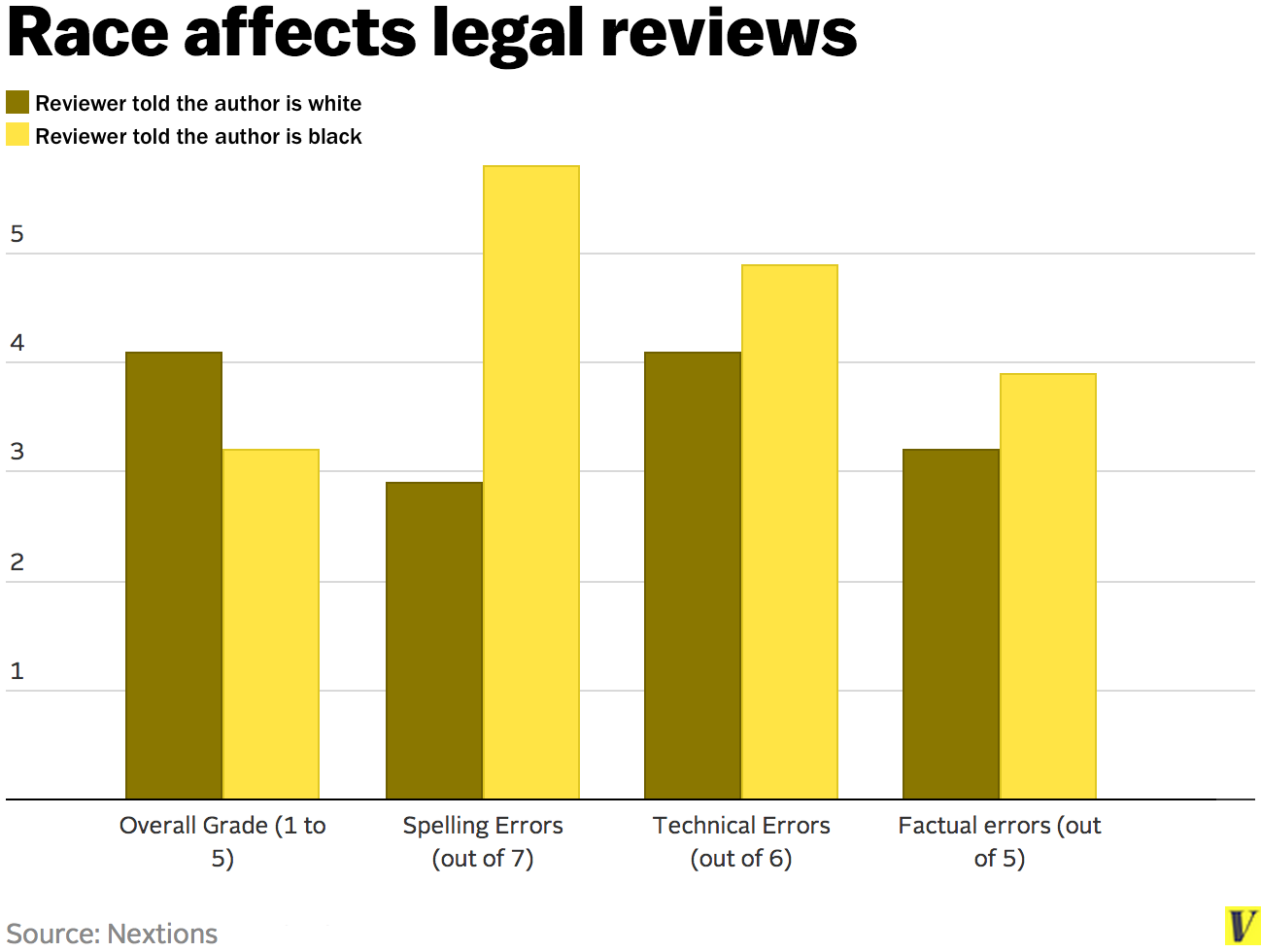 The study itself is far from airtight. The sample size is much too small to use it as the basis for far-reaching conclusions about the legal industry.

But similar conclusions pop up in a staggering range of scenarios. A study last summer showed that doctors are stingier when handing out painkillers to black patients than to white ones. Indeed, doctors appear to make racially biased treatment decisions in a range of areas. And it's not just doctors. In a 2007 study, psychologists had people play a kind of video game where armed and unarmed subjects pop up against a variety of backgrounds and the player has to decide whether or not to shoot. In the simulation, people were more likely to mistakenly shoot a black person than a white one. In a famous 2003 paper, Marianne Bertrand and Sendhil Mullainathan sent out otherwise identical resumes under both stereotypically "white" and stereotypically "black" names. The white names were 50 percent more likely to be called back.  Justin Wolfers and Joseph Price found that white referees are more likely to call fouls on black players in the National Basketball Association.

Everywhere you look, this kind of biased decision-making seems to be in evidence.

And it's so pervasive precisely because it's not limited to the egregious monsters — the Donald Sterlings — of the world. A referee who went around talking like Sterling wouldn't last a season in the NBA. Nor would an openly racist partner last long at a law firm. Biased decision-making is pervasive because perfectly normal people engage in it. Take one of Project Implicit's bias tests and you'll see that you probably do it too.

This, rather than the cartoonish behavior of a Sterling, is the real racism problem that holds African-Americans back.

But there is some good news. People appear to be able to greatly mitigate the impact of implicit racial biases in their decision-making — but only when they pay attention. Remember that computer simulation where people were more likely to shoot unarmed blacks than unarmed whites? Cops show bias in the same test, but are much less likely than civilians to mistakenly shoot the un-armed black person. The researchers credit this to the fact that patterns of racially biased shooting are a widely discussed phenomenon and police departments make a point of training their officers about the appropriate use of force. The study of racial bias in NBA officiating was discussed extensively in sports circles, and bias seems to have decreased substantially in the intervening years.

Samuel Sommers and Phoebe Ellsworth of the University of Michigan did a study of racial bias in mock trial scenarios. They found that white jurors were biased against black defendants except in cases where racial issues were salient in the case.

Given a racially charged case, in other words, white students would tend to check their privilege and judge the case impartially. It's when race didn't seem to be an issue in the trial that biased decision-making came out.

Bias appears pervasive in American life but it's greatly diminished when white people are aware of that fact. The question for us, as a society, is how do we react to a high-profile incident like Sterling. To the extent that white America looks at this case and says "nobody I know would say anything like that!" we may only make the more profound problem worse. Real progress requires constant awareness that racial bias is both much more subtle and much more pervasive than a shocking caught-on-tape moment would lead you to believe.

Jonathan Ezer of Kindea labs has created a cool visualization out of this article: