6 reasons you should consider eating insects

Share All sharing options for: 6 reasons you should consider eating insects

For your own personal health and for the overall health of the planet, you should be eating more insects.

This isn't meant as a provocative, theoretical idea. It's a serious solution to the increasingly pressing problems of global warming and animal welfare — and a practical way of adding low-fat protein to your diet. The UN has advocated eating insects for these very legitimate reasons, and it's something two billion or so people around the world have done for centuries.

Of course, I'm far from the first to advocate that Western readers should adopt the practice. But it looks like we might be on the verge of a real insectivorous moment in consumer culture. The Brooklyn startup Exo just started selling protein bars made from ground cricket flour (they come in flavors like blueberry vanilla and cacao nut), and they're one of a few companies entering the business.

1) Insects are more sustainable and ethical than chicken, pork, or beef 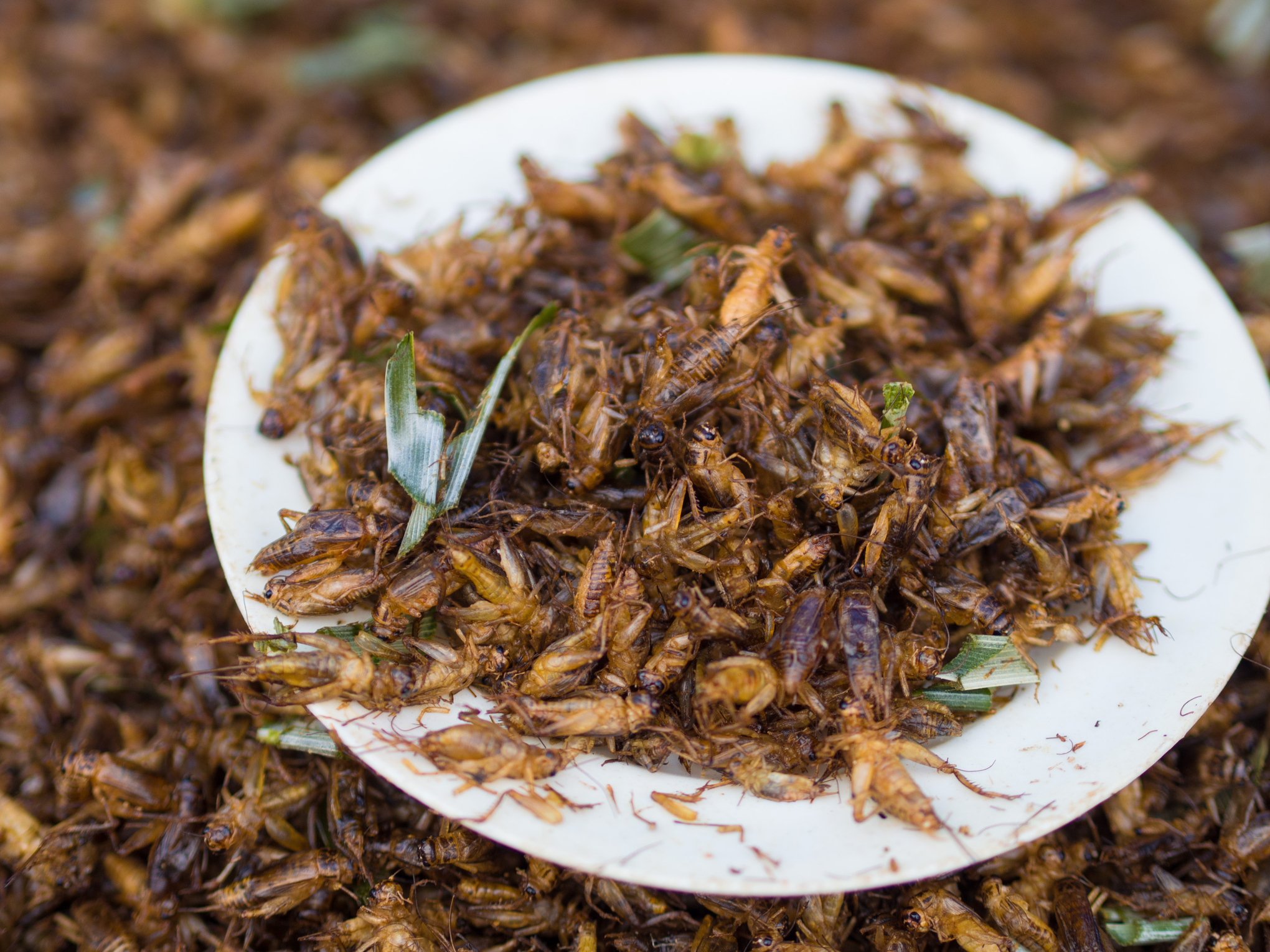 Put simply, our increasing reliance on factory-farmed meat is killing the planet.

Growing grain and then feeding it to animals so we can eat them — the way the majority of meat is produced nowadays — is incredibly inefficient. Between the carbon dioxide emitted as a result of growing grain and the methane burps emitted by cows as they digest it, it's estimated that raising livestock generates about 18 percent of global greenhouse-gas emissions.

Studies have found that raising insects like mealworms and crickets for food, on the other hand, is much more environmentally benign, because we don't need to clear nearly as much land to raise them, they're cold-blooded (so require less feed per unit of body weight to sustain themselves), and we can consume their entire bodies, wasting little flesh.

Because we can grind crickets into flour, exoskeletons and all, we can convert 80% of their weight into food. (Anand Katakam)

As a result, the difference in greenhouse gas emissions between producing insects versus conventional meat is huge. This graph, from the UN report, shows the emissions that result from producing a kilogram of pork and beef, compared to a kilogram of insect meat: 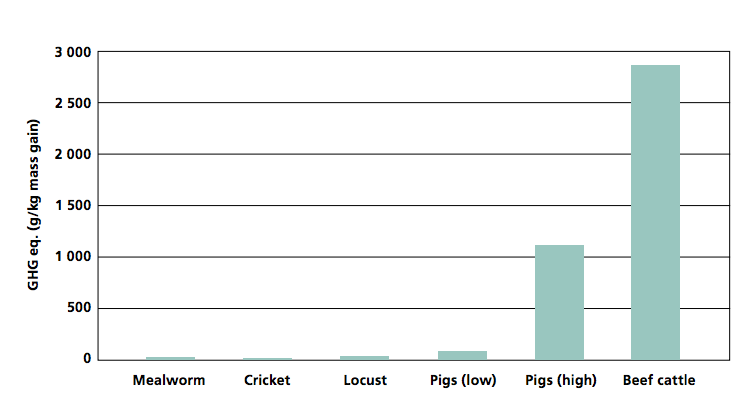 Because demand for meat is rising around the world, livestock production is going to become an increasingly big reason why the planet is warming — unless we find an alternative. Like insects.

It turns out that pound for pound, eating insects like crickets and mealworms (larvae that later turn into beetles) provides similar levels of fat and protein to conventional meats like beef, chicken, and fish. 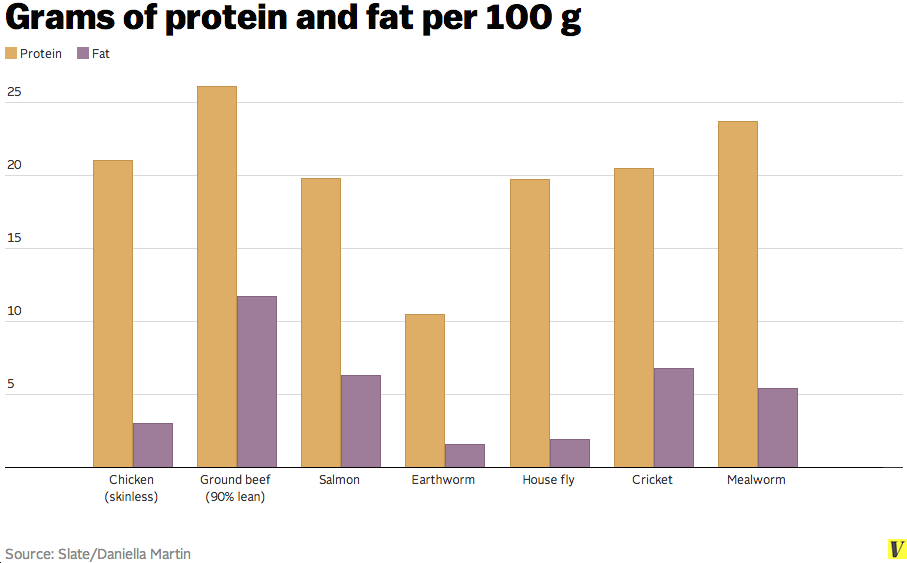 These insects also have much higher levels of nutrients like calcium, iron, and zinc, partly because we can eat them ground into a fine powder, exoskeletons and all: 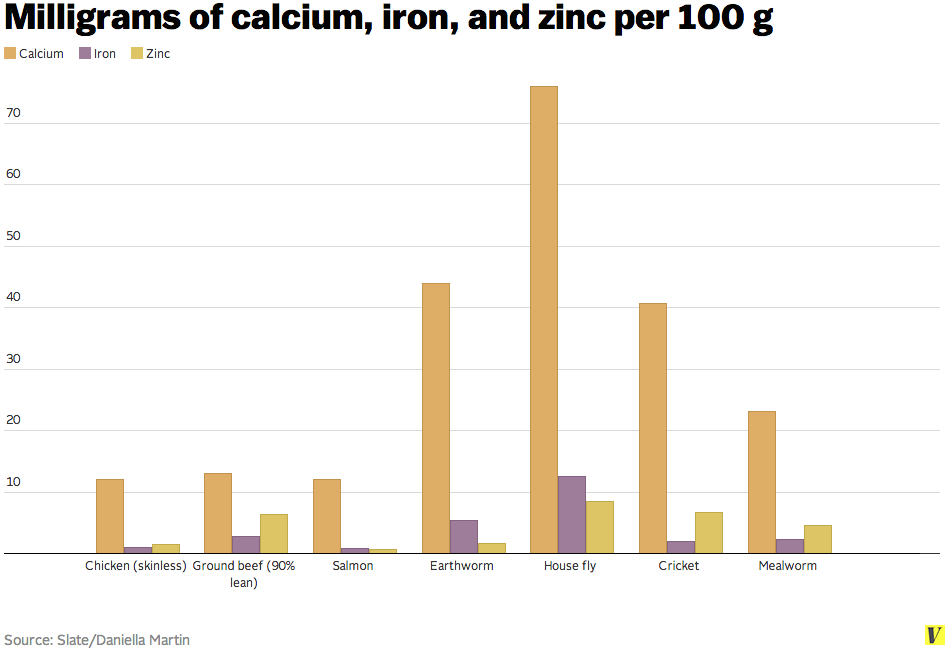 These insects are also good sources of vitamin B12, an essential vitamin that's barely found in any plant-based foods (and thus can be difficult for vegans to come by).

Of course, there are other alternate protein sources besides meat, but they each have their own nutritional problems. Most nuts and legumes lack one or more of the nine amino acids our bodies need. Eating excessive amounts of soy — the raw ingredient for tofu, tempeh, and all manner of fake meat products — may cause unfortunate side effects.

Lots of smart people disagree about the ethics of eating meat. Some argue that the pleasure we derive from eating meat outweighs the pain and suffering experienced by a cow or pig in captivity, and some say otherwise.

But few argue that these animals experience no suffering at all. Many scientists who've studied the insect nervous system, though, believe that they don't feel pain. And while it is a matter of debate, even though who disagree would be hard-pressed to argue that insects can suffer as profoundly as a cow or pig.

Raising these insects for meat — instead of cows, pigs, and chickens — would reduce the total amount of suffering that results from our appetite for meat.

4) Our objection to eating insects is arbitrary 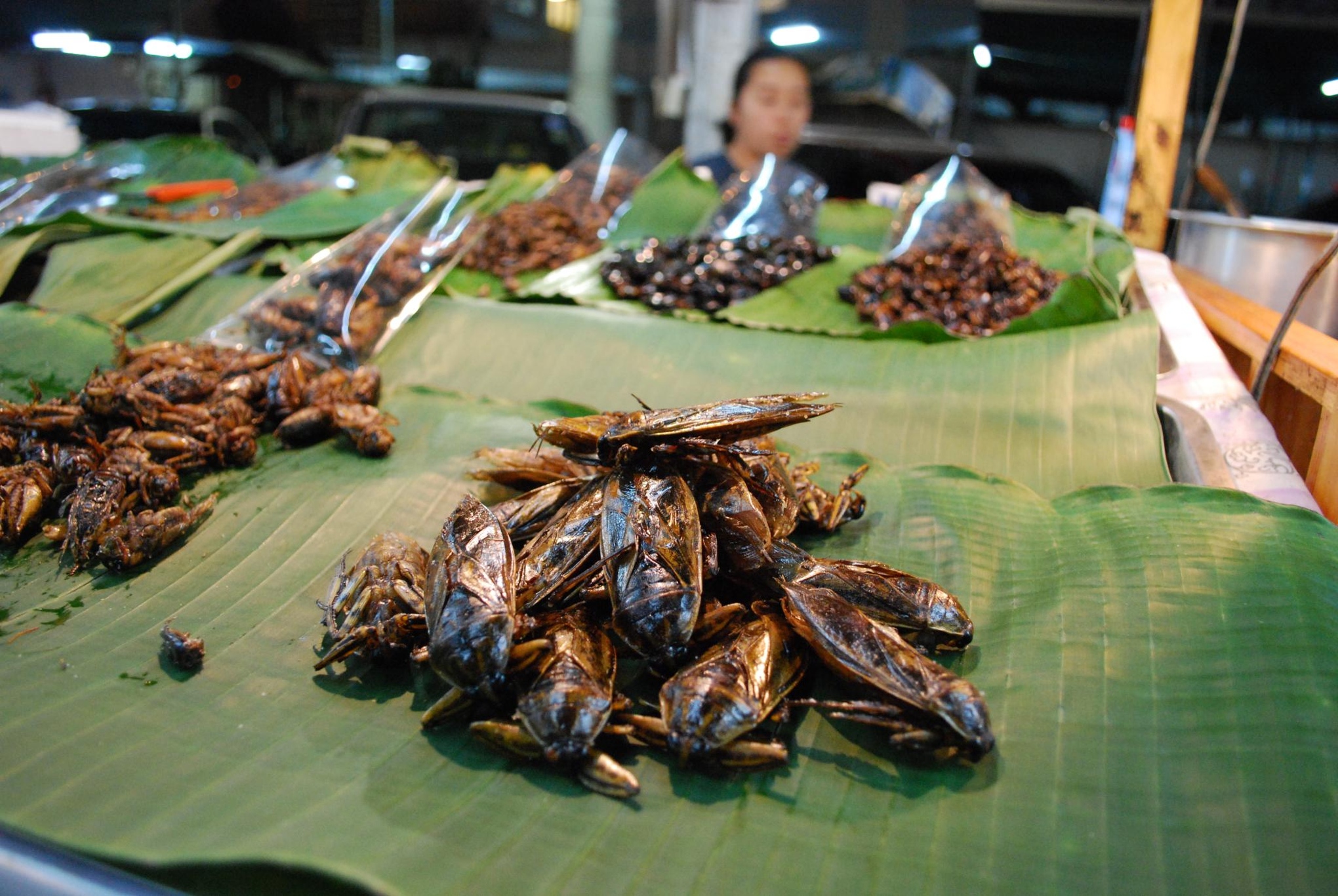 Your first reaction to this article was probably a sense of revulsion. For many readers, there's something intrinsically gross about the idea of eating insects.

But there's nothing innate about that disgust. For one, billions of people already eat insects in Asia, Africa, and Latin America every day. More generally, the animals considered to be fit for consumption vary widely from culture to culture for arbitrary reasons.

Most Americans consider the idea of eating horses or dogs repugnant, even though there's nothing substantial that differentiates horses from cows. Meanwhile, in India, eating cows is taboo, while eating goat is common.

These random variations are the results of cultural beliefs that crystallize over generations, until it begins to seem like a natural truth that eating insects is gross. (io9 has a fascinating history of how that came to happen in European and American culture.) But luckily, these arbitrary taboos can be defeated over time. There was a time when raw fish — served as sushi — was seen as repugnant in mainstream US culture. Now it's ubiquitous.

With luck, insects — like crickets, for instance, which are closely related to shrimp — may come to seem like elegant hors d'oeuvres.

You'd think that insects would have a pungent, unusual taste. But most of them are surprisingly mild — like tofu, they generally take on the flavor of whatever they're cooked with.

The one time I ate whole, fried insects (crickets and grubs, in Thailand), I was struck by how much they simply tasted like fried food in general. Vox's Zack Beauchamp, who has had sautéed grasshopper tacos at DC's Oyamel restaurant, says "they weren't identifiably cricket-y. More than anything else, the overwhelming flavor sense was saltiness."

For what it's worth, the blueberry vanilla and cacao flavors were excellent.

6) We already eat insects all the time 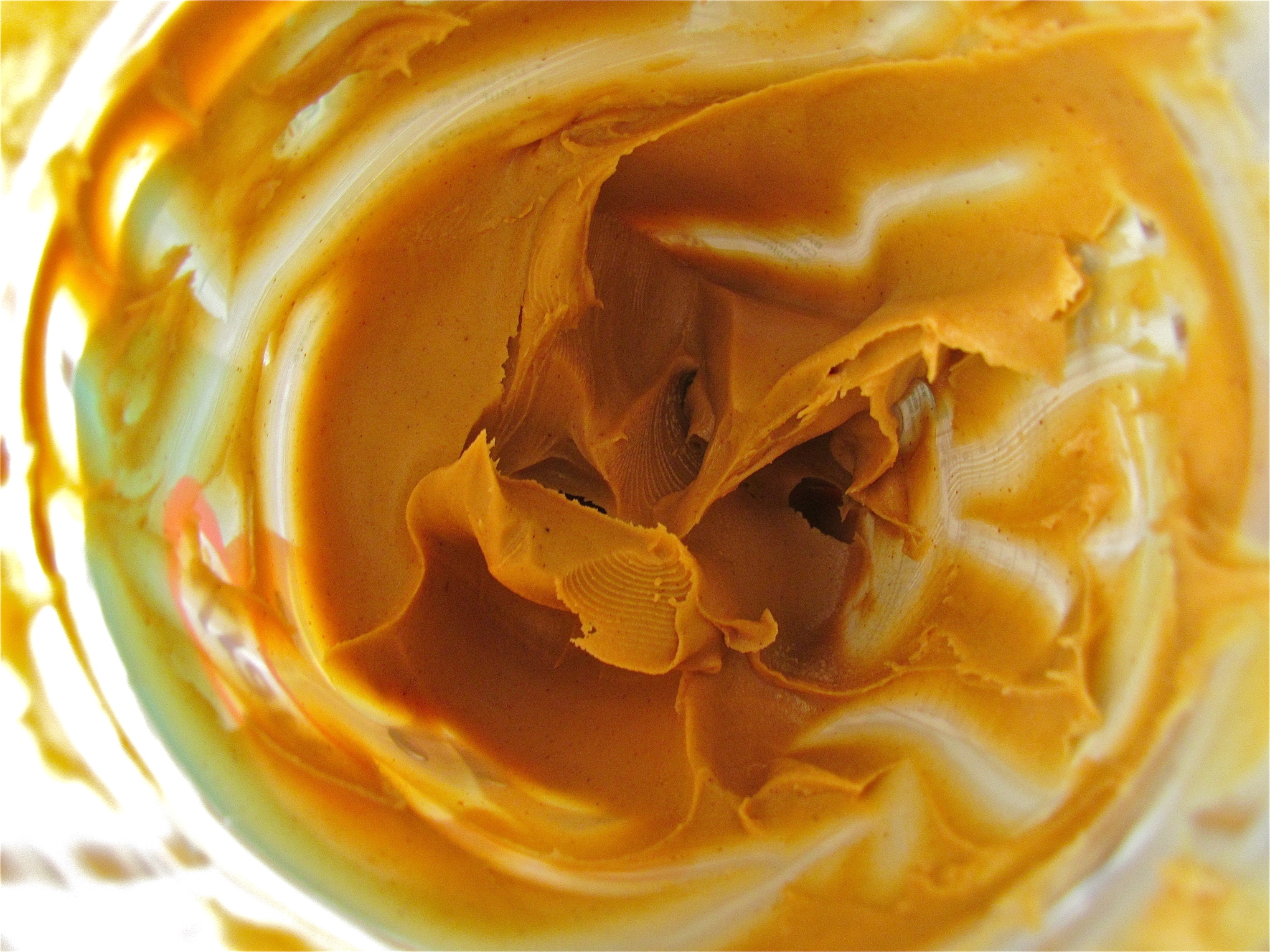 A jar of peanut butter is permitted to contain dozens of tiny insect fragments. Robin McNicoll

The majority of processed foods you buy have tiny pieces of insect in them. The last jar of peanut butter you bought, for instance, may have had up to 50 insect fragments. A package of frozen broccoli may have up to 60 aphids per 100 grams, and the same volume of chocolate can have about 60 fragments of various insect species.

These figures are limits set by the FDA for food contamination — in their words, "levels of natural or unavoidable defects in foods that present no health hazards for humans."

It might come as a surprise that so many processed foods contain insects, but there's a good reason: bugs inevitably infest virtually all food products we grow at low levels. Some experts estimate that, in total, we eat about one or two pounds of insects each year with our food.

These insects pose no health risks, and even the FDA's limits are simply set for aesthetic reasons — in other words, so you don't actually see the bugs mixed in to your food. That you've been eating them your entire life should tell you how much of a danger they present.

I'm sold — where can I find some bugs to eat? 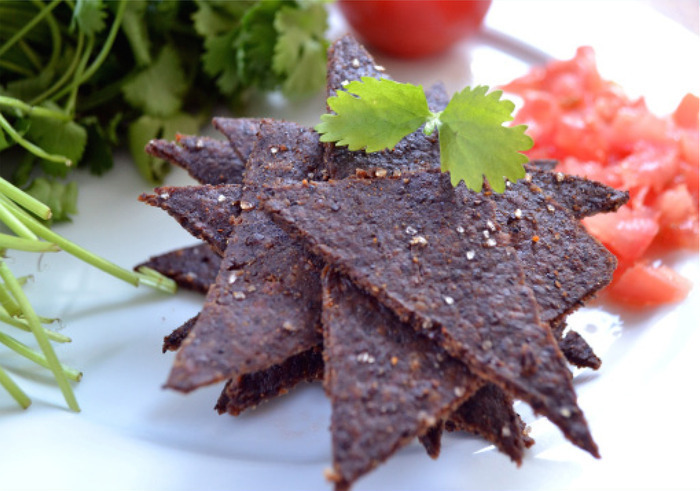 In the US and Europe, insect-based foods are still a niche product sold by a handful of startups and restaurants.

Apart from the protein bar company Exo, there's the British company Ento (which sells sushi-like bento boxes with cricket-based foods), the Boston-based Six Foods (which just rolled out low-fat chips made from cricket flour), World Ento (which offers recipe-ready crickets, along with cricket-based flour and baking mixes), and All Things Bugs (which sells bulk cricket flour), among others.

If the idea takes off, it's easy to imagine a bigger variety of offerings, especially because because cricket farms — which grow insects intended as lizard food — could offer the insects at lower prices.

Eventually, insects might even become the next hyper-local, self-gathered food source, because many different edible species are available in so many areas of the US. But be careful: because of widespread lawn pesticide use, it's hard to ensure they're safe, so they should be washed and cooked thoroughly.