Everything you need to know about charter schools

Share All sharing options for: Everything you need to know about charter schools

What is a charter school?

Charter schools are schools that are publicly funded but operated by independent groups. (The name comes from the contract, or "charter," that a group gets to operate a school.)

Charter schools don't have to follow the same regulations from states, municipalities and school districts as traditional public schools. In general, charter schools have more flexibility to set curriculum and school hours and rules than traditional public schools. And because they're not bound by union contracts, they also have more leeway to hire and fire teachers. In exchange, they have to meet accountability standards. About 15 percent of charters nationally have been closed for failing to do so.

The Obama administration has strongly supported charter schools, awarding billions of dollars in a competitive grant program to states with charter-friendly laws.

Education reformers, a group that includes both Republicans and Democrats, like that charter schools offer more flexibility to try out new ideas and can offer a high-quality education in dysfunctional urban districts.

Teachers' unions say they support high-quality charter schools in theory, but they're often skeptical of them in practice. Charter opponents argue that don't all provide a high-quality education (despite the high-profile success stories), that accountability standards aren't rigorous enough, and that charter schools exclude too many students who are difficult to educate. In some cases, they're also operated for profit.

Just like traditional public schools, charter schools can be effective or ineffective, depending on teachers, leadership and other factors. But some have achieved notable success in helping low-income and minority students achieve high test scores and prepare for college.

How is a charter school different from a neighborhood public school?

There are a lot of differences, both in how the schools are set up and what the education looks like day-to-day.

Both are "public" schools because they're funded with taxpayer money, don't charge tuition and are required to take any student who wants to enroll. But while a neighborhood public school is governed by a school district and its school board, charter schools are operated by independent groups, which can be either nonprofit or for-profit. Students also aren't assigned to charter schools based on where they live. Instead, parents enter a lottery for charter school seats.

Charter schools also aren't bound by union contracts or most of the rules and regulations that govern traditional public schools. Instead, they're required to demonstrate that they're getting results and that they have financial stability. Charter schools that fail can be closed.

In some states, charter schools can hire teachers who aren't certified by the state. More charter schools than public schools pay teachers based on performance. They also have more freedom in what the educational experience is like. Charter schools can require uniforms or not; build a curriculum around a specific issue or goal, such as science education or college preparation, or a teaching method, such as Montessori; lengthen the school day and year; and make other changes that are difficult or uncommon at the school district level.

Do charter schools have admissions policies?

Charter schools aren't supposed to have admissions policies, but opponents contend that they skirt that requirement.

Some schools require an entrance exam or a lengthy application that includes essay questions, a Reuters investigation in 2013 found. There have been individual reports of charter schools illegally testing applicants.

Charter supporters argue that this is part of why charter schools are effective — they can teach kids who want to learn and be in school — and that parents support strict discipline policies.

The best-known charter schools and charter networks — groups that operate charter schools nationally — are often in troubled, high-poverty school districts. Those charter schools seek out disadvantaged students, and some of them are among the most effective in raising student grades and test scores. But charter schools are also located in other urban districts and even some suburban areas.

All kinds of groups. Charters can be started by nonprofits, corporations, parents, churches or school districts. Some of the best-known charter schools are part of networks, such as KIPP, the Knowledge is Power Program; Uncommon Schools; and Success Academy, all of which are nonprofit.

For-profit groups can also manage charter schools. The largest for-profit charter operator is K12, Inc. The proportion of for-profit to nonprofit operators varies significantly by state: Florida, Michigan, and Ohio are strongholds for for-profit charter companies, while nonprofits are much more common in California and Texas.

In 2011, just over half of charter schools — 56 percent — were in urban areas. New Orleans has the highest percentage of students in public charter schools, followed by Detroit; Washington, DC; Flint, Michigan; and Kansas City, Missouri.

How are charter schools funded? 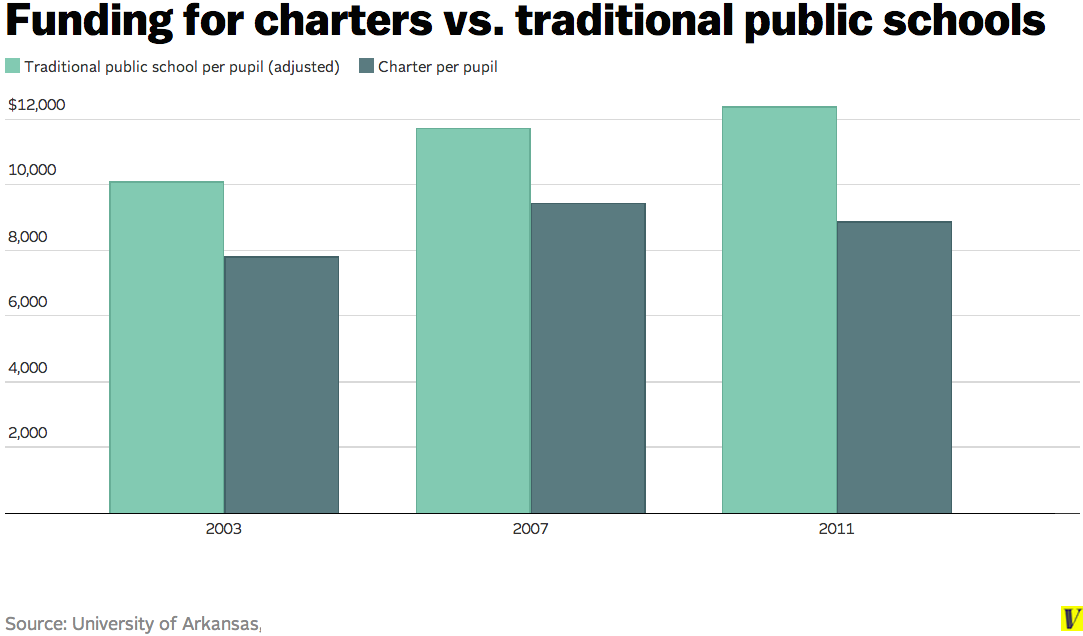 The gap has grown since 2003, even as charter school enrollments expanded.

The study was funded by the Walton Family Foundation, a nonprofit that has donated more than $1 billion to education and is particularly interested in promoting the spread of charter schools. Donations like those from Walton are one way that charter schools make up the gap for the money they don't get from local government sources.

What is the relationship between charter schools and school vouchers?

Charter schools are part of a broader movement known as "school choice." The unifying theme is that parents should have options beyond the neighborhood public school for their students. While education reformers broadly agree that students and parents should have choices, they often don't agree on what form those choices should take. Magnet schools, voucher programs, open enrollment policies that allow students to go to any school in a district, and tax credits for tuition are other ways of offering parents and students choice.

While many policies can offer some form of choice, "school choice" is often used as exclusively a synonym for school vouchers, which allow parents to use taxpayer money to send their students to private schools, including religious schools. Many charter school supporters don't support vouchers.

President Obama, for example, has encouraged the growth of charter schools as a key part of his education agenda, and Education Secretary Arne Duncan has praised charter schools for offering students and parents choice. But Obama isn't a voucher supporter. He argues that those programs don't have a proven track record and take the focus off improving public schools.

Do charter schools take money away from public schools?

Source: National Alliance for Public Charter Schools. Data is for the 2010 to 2011 academic year.

Charter schools have long had a presence (albeit smaller) in suburbs and are expanding into rural areas. Some charter schools are online, meaning students can be located anywhere in the state and take classes there.

Resistance to charter schools has typically been higher in the suburbs, because those school districts are perceived as being less problematic than the urban school districts where charters have thrived. Montgomery County, Maryland, a wealthy suburb of Washington, DC, drew headlines for opening a charter school in 2011. (It's closing at the end of the 2013 to 2014 academic year due to budget deficits.)

Do charter schools get better results?

This is a very active area of research, and some studies have conflicting results. Overall, many studies have found that charter school students aren't doing worse than their peers in traditional schools. Whether they're doing better — and by how much — is hotly debated.

A 2010 study from the Education Department's Institute of Education Sciences found that student results varied significantly by school. On average, charter middle schools did neither better nor worse at improving student achievement. The study found charter schools made a difference for low-income or low-scoring students, but that high-income or high-achieving students did worse than their peers in traditional public schools.

A 2009 study of New York City's charter schools found much more dramatic effects. The study compared students who won lottery admission to charter schools in the city with students who did not. Students who were admitted improved their test scores every year relative to their counterparts who were not. By graduation, they had closed 86 percent of the achievement gap between poor city students and their rich suburban counterparts in math. In reading, they closed about 66 percent of the achievement gap.

What does Hurricane Katrina have to do with charter schools?

New Orleans is a laboratory of charter school experimentation. After Hurricane Katrina devastated the city and its school system, the city's Recovery School District — which had focused on New Orleans' worst schools before the storm — was given control of most of its schools. The district is made up almost entirely of charter schools. About 90 percent of New Orleans students now attend a charter school, a far higher proportion than any other district in the country.

Since then, graduation rates have increased dramatically, from 54 percent before the storm to 78 percent now. (Although the district is smaller than it was before Katrina, it has similar demographics.) But concerns persist about how well the system is serving students with disabilities. Students protested against the charter operators' discipline policies in 2013.

What are charter school opponents’ arguments?

Opponents include education historian Diane Ravitch, a former George W. Bush administration official who later changed her views on education reform to become one of its most prominent critics; national associations representing superintendents and local school boards, who think charters should abide by the same rules as other schools; and teachers' unions, who generally have opposed charter school expansions.

Some opponents also fear that taking the power to run schools out of the hands of school boards contributes to the privatization of education, especially if the charter operators are for-profit. This blog post summarizes many of the arguments in the anti-charter movement.

You didn’t answer my question!

This is very much a work in progress. It will continue to be updated as events unfold, new research gets published, and fresh questions emerge.

So if you have additional questions or comments or quibbles or complaints, send a note to Libby Nelson: libby@vox.com.

Where can I learn more about charter schools?

There's a lot out there. These reports from the Center for Education Reform and the National Alliance of Public Charter Schools give a good overview of the charter school landscape from a pro-charter perspective. Much more on charter school effectiveness can be found at Stanford University's CREDO and the University of Washington's Center on Reinventing Public Education.

Waiting for Superman, a 2010 documentary, paints a damning portrait of traditional public schools and features five children waiting to learn if they'll win a charter school lottery. Paul Tough's Whatever It Takes is an in-depth portrait of the Harlem Children's Zone, whose interventions include charter schools. Tough's 2012 follow-up, How Children Succeed, looks at the concept of "grit," popular among charter networks. Sarah Carr's Hope Against Hope follows students and teachers at three New Orleans charter schools as the city restructures after Hurricane Katrina.

Education historian Diane Ravitch's Reign of Error, which decries many trends in education reform, includes plenty on charter schools. Ravitch also responded to Waiting for Superman herself in the New York Review of Books.