Tornadoes are inevitable — so how do we stop them from killing people?

Share All sharing options for: Tornadoes are inevitable — so how do we stop them from killing people?

At least 33 people have died in the last two days as more than 100 tornadoes ripped through Oklahoma, Arkansas, Mississippi, and Tennessee. And more twisters may be on the way soon.

Our tornado defenses could still be improved

The United States, as we've pointed out, is unusually prone to violent tornadoes. So it's worth asking whether there's more that people can do to protect themselves.

The country has already done a lot to improve its early-warning systems and reduce the risk of tornado deaths since the 1950s. But our defenses are still far from perfect — and people keep moving to tornado zones, experts are pondering ways to sharpen those warnings, fortify homes and schools, and better limit the damage. 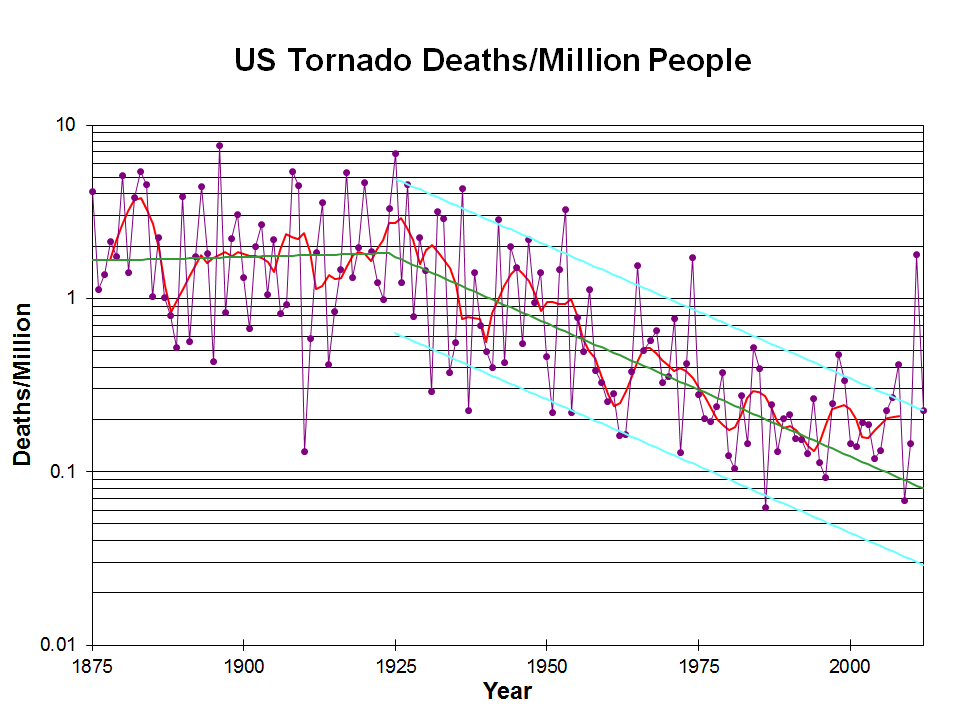 The chart above comes from Harold Brooks of the National Oceanic and Atmospheric Administration (NOAA). Even though more and more Americans are living in areas where twisters roam, the number of tornado deaths per capita has declined in the last century.

One reason? Better early warning systems. Back in the 1980s, forecasters could only give about five minutes' warning before a tornado hit, on average. Today, that's up to around 14 minutes, thanks to new radar systems and better forecasting. That gives people more time to seek shelter.

What's more, meteorologists can now issue broader tornado watches to large regions days in advance. Case in point: all of the major tornadoes on April 28 hit a region that had already been declared "high risk" by NOAA's Storm Prediction Center.

Still, we haven't eliminated tornado deaths entirely — especially since more and more people are living in tornado zones. There were 553 deaths nationwide in 2011 and 70 in 2012. One 2008 study found that most fatalities now occur in the mid-South region. There are more mobile homes there (about 44 percent of people killed live in mobile homes), and tornadoes are more likely to strike at night, when people are asleep. 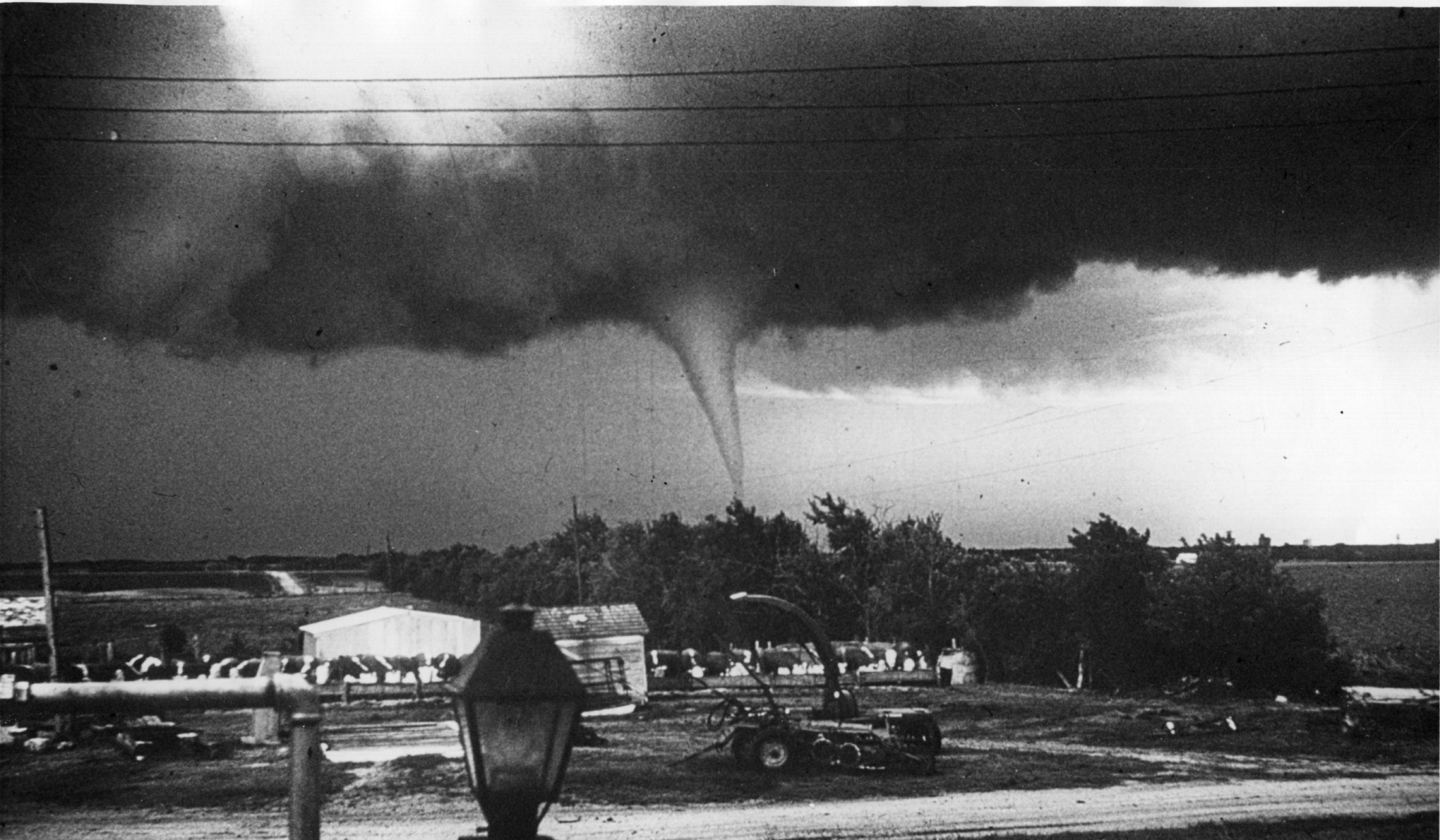 26th May 1959: The destructive funnel cloud of a tornado touches ground near Lyons, Kansas. (Photo by Bert Hoyt/Three Lions/Getty Images)

Scientists are likely to keep improving their forecasts in the years ahead. Advanced radar systems and lightning mapping arrays will help peer into the innards of storms. NOAA is upgrading its computers that analyze weather data. Eventually, forecasters may be able to give an hour warning before a tornado hits — up from 14 minutes today.

But will that help significantly? Some experts aren't so sure. A 15 minute warning allows people to seek shelter. But an one-hour warning might actually be counterproductive, says Kevin Simmons, an economist who studies tornadoes at Austin College in Sherman, Texas.

For starters, an hour warning may tempt some people to flee in their cars rather than seek shelter — which is often the worst possible thing they can do. (Most of the deaths in the 2013 El Reno tornado came when people tried to flee by vehicle.)

What's more, if people do seek shelter for an hour and the warning turns out to be false, that may make them far more skeptical of future warnings. Simmons' research has found that areas with more false tornado alarms have higher levels of fatalities when twisters do hit — presumably because people ignore the warnings.

"I'd argue that instead of longer lead times, it might make more sense to improve forecasts so that we can get more precise on the areas at risk," says Simmons. But, he notes, there's currently a robust debate over whether longer lead times would be helpful. 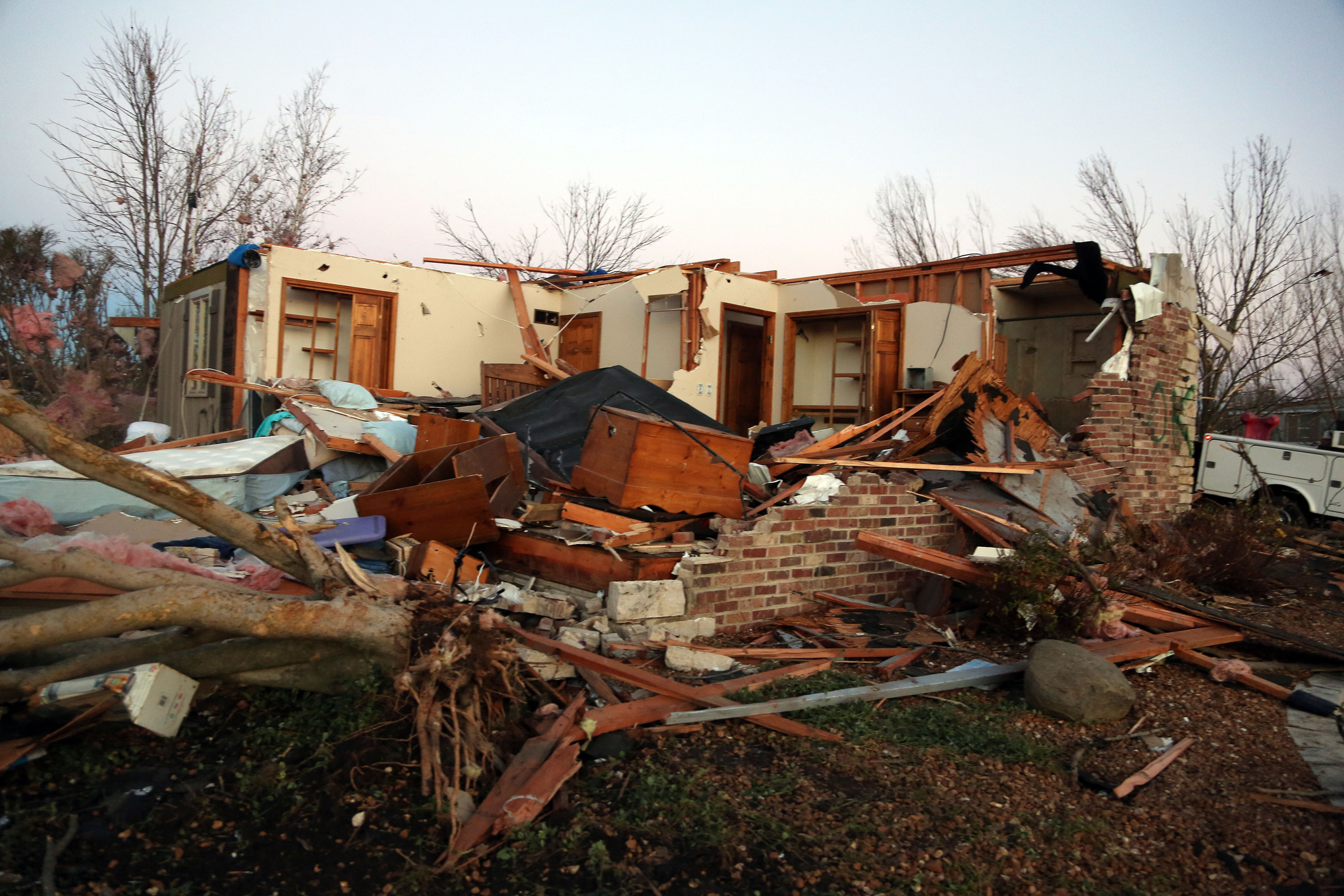 A home sits in ruin along Elgin Avenue after a tornado struck on November 17, 2013 in Washington, Illinois. Tasos Katopodis/Getty Images.

The other thing that people in tornado areas might do is build sturdier homes, schools, and shelters. In theory, there are all sorts of ways to go about this — but they're not always as simple as they sound.

In some places, like Oklahoma, underground shelters aren't always practical

For instance, storm cellars or basements can protect people during tornadoes. But in some regions, like Oklahoma, underground shelters aren't always practical, since the composition of the soil makes basements difficult to maintain.

Alternatively, as Simmons explains here, there are ways to construct homes so that they can withstand stronger winds — by stiffening the exterior walls and reinforcing the garage doors. But, while this might only cost an extra $2,000 or so in a new home, it's much more expensive to retrofit existing homes.

There are also "dome" designs for schools and other buildings, which can help withstand heavy winds. Granted, these only help up to a point — it's virtually impossible to build a structure that can withstand direct contact with the most powerful EF5 tornadoes. But they might help buildings just outside the direct path.

The big question, though, is whether these improvements are cost-effective or not. And that's not always clear. Oklahoma, for instance, offers $2,000 rebates to defray the cost of building "safe rooms," which can help people survive a tornado. Yet subsidizing safe rooms for the million homes in Oklahoma that might get hit by a tornado would cost $2 billion. On the flip side, the state averages about 5 or 6 tornado deaths per year. Are safe rooms really the best way to save lives? It's an uncomfortable question, but that's a trade-off that policymakers face all the time.

Simmons, for his part, says he's currently conducting research into the most cost-effective ways to limit tornado damage. (And see Harold Brooks' comments here for more on this with regards to hardening schools.) We'll no doubt continue to find ways to reduce tornado deaths over time — but it won't always be easy.

Further reading: How tornadoes happen — and why the US is unusually susceptible.