No, the economy doesn't look OK when you ignore men and focus on women

Share All sharing options for: No, the economy doesn't look OK when you ignore men and focus on women

They say well-behaved women seldom make history, but will those ladies someday take over the US economy? The New York Times' Upshot has a story out today on the link between polite little girls, fidgety little boys, and men's recent economic troubles. In it, David Leonhardt says "we're going to have to solve our boy problems" in the US, then makes the following observation:

To put it another way, the American economy — for all its troubles (and all of the lingering sexism) — looks to be doing pretty well when you focus on girls. The portion of women earning a four-year college degree has jumped more than 75 percent over the last quarter-century, in line with what has happened in other rich countries. Median inflation-adjusted female earnings are up almost 35 percent over the same span, census data show — while male earnings, incredibly, haven't risen at all.

He's right that women have made some staggering gains in education and wages alike — women have been earning more bachelor's degrees than men since the 1980s and have also surpassed men on professional and advanced degrees. But those figures haven't translated into economic dominance, or even economic parity. Women's wages as a share of men's have grown considerably, but women remain far behind. That means the economy doesn't really look like it's doing all that well when you focus on women.

Broadly speaking, women are not doing better than men in the workforce. Women's unemployment rate is even with men's right now, but women are participating in the labor force in far lower numbers. Only 57.1 percent of women are looking for jobs or working right now. Meanwhile, 69.2 percent of men are.

If tomorrow the economy-wide labor force participation rate suddenly dropped to 57.1 percent, economists would collectively (and justifiably) soil themselves, meaning it's hard to really say that the economy is doing great when you just look at the ladies. 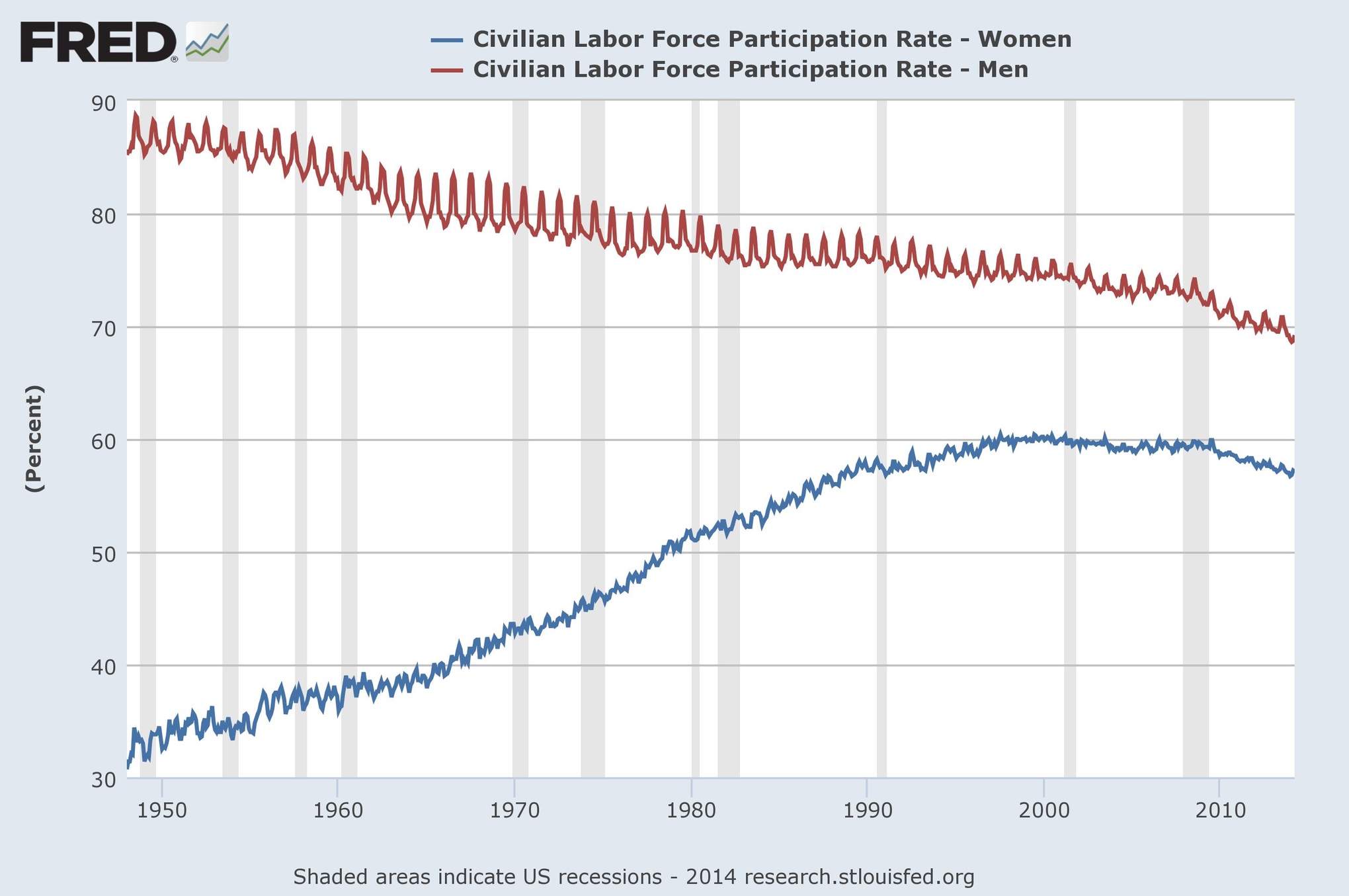 Women's wages have grown significantly, but they're still way behind men's. Full-time, year-round working women earn 77 percent of what men do in a year. Women also earn less on a weekly and hourly basis. There are all sorts of reasons for this — women tend to study different things than men and go into lower-paying fields, for example. But even if you adjust for lots of these factors (an adjustment that adjusts away a lot of society's ingrained sexism, as Vox's Matt Yglesias has pointed out), several studies have shown women still earn less than men, albeit with a much smaller gap.

In addition, low-wage work is dominated by women. In 2013, women made up around 62 percent of all workers earning the minimum wage or lower, according to the Labor Department.

And even among younger cohorts, where women tend to be more educated than men than in older age groups, women's wages have yet to catch up, as the Pew Research Center showed in a recent study. 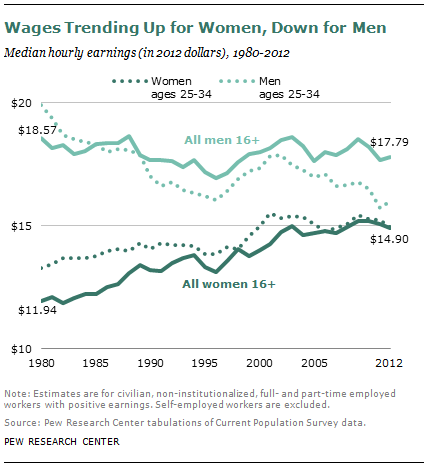 Moreover, even when they do pick the same occupations as men, women still earn less. Women's wages exceed men's in only three of the more than 100 occupations for which the Labor Department has data. Once again, if tomorrow the labor force only looked like the women's labor force — lots of low-wage workers and far fewer engineers — it would be a reason to panic.

The proverbial glass ceiling remains firmly intact at most major companies. Women make up only 23 of the Fortune 500 CEOs, a rate of 4.6 percent, according to Catalyst, a nonprofit organization that advocates for women in the workplace. Women also only occupied 16.9 percent of seats on those companies' corporate boards of directors last year, according to the organization's 2013 census.

Women also aren't making the decisions that run the economy. Fed Chair Janet Yellen may have made history, but women still only make up around 19 percent of members of Congress. A woman also has yet to run the Treasury or win the presidency.

Working moms still do more housework than working dads. Women also get maternity leave in far greater numbers than men get paternity leave even at family-friendly companies, according to the Institute for Women's Policy Research, and one recent study shows that most men take less than a week off for the birth of a child, and that some men don't even take their full paternity leave.

These sorts of figures point to societal expectations that women still remain the heart of the household, and underlie the ideas that women can "have it all" and therefore do it all. Women may be making remarkable strides in many areas, but until both genders share these burdens equally, economic parity could be hard to come by. Until then, women will have a disadvantage, regardless of how well-behaved they were in the elementary school classroom.