The Republican replacement for Obamacare is Fauxbamacare

Share All sharing options for: The Republican replacement for Obamacare is Fauxbamacare

Scott Brown, who's now running for Senate in New Hampshire, has found the perfect position on Obamacare. He's for it. He's just not for calling it Obamacare.

In an interview with WMUR, he called Obamacare a "disaster." Then he was asked what he's for  — and he went on to describe Obamacare.

"I've always felt that people should either get some type of health care options, or pay for it with a nice competitive fee," he said. "That's all great. I believe it in my heart. In terms of preexisting conditions, catastrophic coverages, covering kids, whatever we want to do." He even said it could "include the Medicaid expansion [for] folks who need that care and coverage."

Oh, he also promises his plan won't raise taxes, cut spending on Medicare, or make people drive very far to go to the hospital. So his plan will have more generous insurance options and no way to pay for them. In other words, his plan will be like Obamacare, but even better! Call it Fauxbamacare.

Brown is picking up on a real opportunity here. The polls around Obamacare are frustrating both to the law's principled supporters and its principled opponents. There is, in theory at least, a huge opening for an unprincipled opponent — someone who opposes "Obamacare", but supports virtually all of the policies in Obamacare.

The disconnect runs deeper. The Kaiser Family Foundation has found that the component parts of Obamacare poll highly even as the law itself remains unpopular. They also found that Obamacare's most popular provisions were its least well-known, and vice versa: 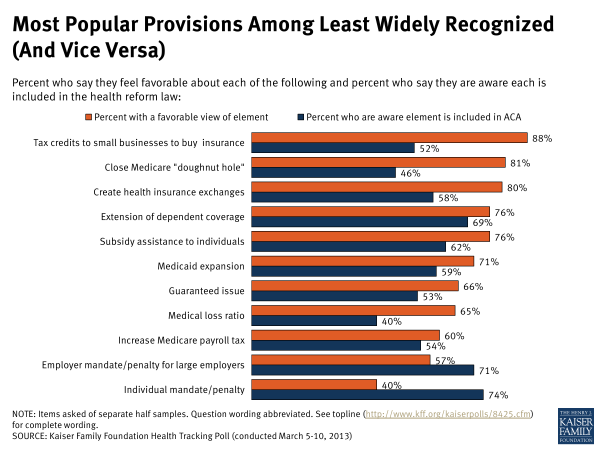 That, if anything, understates the danger of promising repeal. Before Obamacare launched, repeal was a politically reasonable position. You can take away something people don't yet have. But now that well over 10 million people depend on Obamacare for their insurance repeal would be a disaster for the GOP. It would mean canceling more insurance policies than Obamacare ever dreamed of.

Of course, the GOP's position has never been repeal. It's always been repeal-and-replace. The problem is they've never quite come up with a replacement. There's a good reason for that. Obamacare borrows quite a bit from conservative health-care policy thinking. It's modeled off Mitt Romney's reforms in Massachusetts, which were in turn modeled off the reforms Senate Republicans put forward in 1993.

Republicans could have seen Obamacare as a victory. Instead, the party underwent a we-have-always-been-at-war-with-Eastasia process and turned against ideas they'd once seen as uncontroversial (Sen. Chuck Grassley, June 2009: "I believe that there is a bipartisan consensus to have individual mandates."). The problem with turning against all those ideas is that it's actually really difficult to come up with workable health-reform plans that aren't also terrible politics. Obamacare is a good example of just how hard it is: it's a plan so politically appealing that both Republicans and Democrats have turned to it, and yet it's still terrible politics!

But the polls are clear. The American people don't want Obamacare. However, they like what's in Obamacare. And they don't like it when Republicans try to get rid of Obamacare. Brown's position shows Republicans a way out: a rebranding of Obamacare, accompanied, perhaps, by some vague tweaks and changes to be named later. Fauxbamacare, in other words.