Which species are smartest? For many years, there have been two competing ideas about this.

One is that animals with the biggest brains win out — which, in theory, means that we should be watching out for sperm whales, whose 17-pound brains are the largest on Earth. The other idea is that what matters is relative brain size — how big the brain is compared to the body. That calculation would put humans on top. 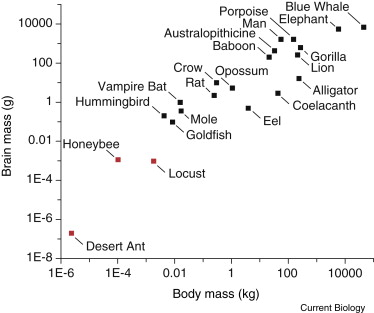 Now, 58 researchers got together to rigorously examine which is true. They studied 36 species on one aspect of intelligence — self-control — and found that bigger brains do seem to be better, at least for this aspect of smarts.

The resulting paper, published in the Proceedings of the National Academy of Sciences, had animals including birds, dogs, rodents, monkeys, and apes take on two problem-solving tasks. In one, "subjects were required to resist searching for food in a previous hiding place when the food was visibly moved to a novel location."

In the other test, researchers taught subjects to find food inside an opaque tube. Then they switched the tube for a transparent one. And then they observed if the animals learned to reach into the tube or kept bumping against it trying to get through it.

The New York Times has a nice story and video on it, and I've put the paper's most interesting figures below.

Bigger brains are correlated with better self control 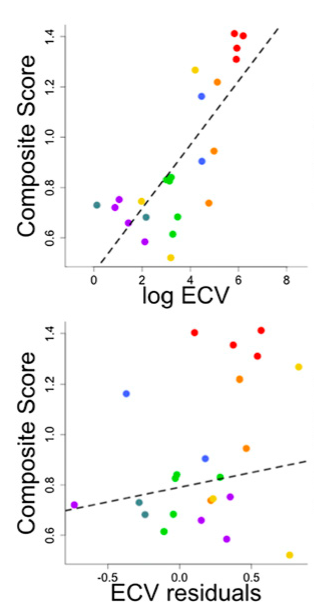 Total brain volume [top] better predicted combined self-control scores than relative brain size (adjusted for body size )[bottom]. Apes are winning in red at the top. Birds are in purple at the bottom. Note: porpoises, elephants, and whales all have bigger brains than we do. So, if the trend generalizes, then there may be some really smart non-human animals out there. However, the researchers note in their paper that the trend "may not generalize to all other large-brained animals (e.g. whales, elephants)." (They didn't test whales or porpoises, but gave one test to just one Asian elephant, which did terribly. But it's difficult to conclude anything from just one subject. More research is clearly needed here. The chart above doesn't include the elephant.)

A broader diet is correlated with better self control 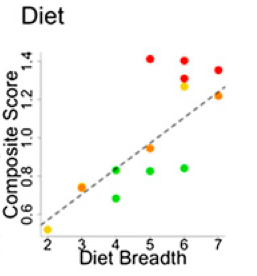 Looking just at primates, the researchers also showed that self-control scores were correlated with the breadth of the species' diet (above). Why did this come about? There are two main possibilities. The need to be smart to find many different foods could have provided the evolutionary pressure for brains to get bigger. That is, animals with more self-control and bigger brains may have survived and procreated at higher rates because they were better able to find the foods they needed. Or, a broader diet could have simply brought in more nutrition that then physically allowed brains to grow over many, many generations. Or both could be true at the same time. (And no, this doesn't mean that a single human broadening his personal diet will do anything for his self-control.)

Check out the videos below of animals succeeding — and failing — the tests. There are some birds being super smart. And some dogs being super dumb.