The award for "most unnerving web app of the past week" goes, without a doubt, to Digital Shadow, a promotion for the game Watch Dogs which uses your Facebook data to guess your location, your income, and your passwords. I maintain fairly restrictive privacy settings, and most of the page didn't predict much, but the income prediction was a $20,000 range almost perfectly centered on my actual salary. If that weren't enough, it also combs through your friends to identify which you interact with more than vice versa ("obsessions"), which interact more with you ("stalkers"), and which tag you a lot, spreading your personal information more widely ("liabilities").

None of these are my password. Image via Digital Shadow.

The trick here — using Facebook's API to show how creepy Facebook's API is — has been around for a while. The 2011 short film Take This Lollipop pulls in photos, wall postings, and other data from your Facebook account and depicts a stalker menacingly combing through it, before trekking out to find you with the help of all the photos of yourself you've willingly turned over.

But in case that didn't freak out enough, don't fret. Here are seven more creative uses of the Facebook Connect service that drive home just what's possible -- and what's probably over the line.

1. Which of your photos feature you in a bikini 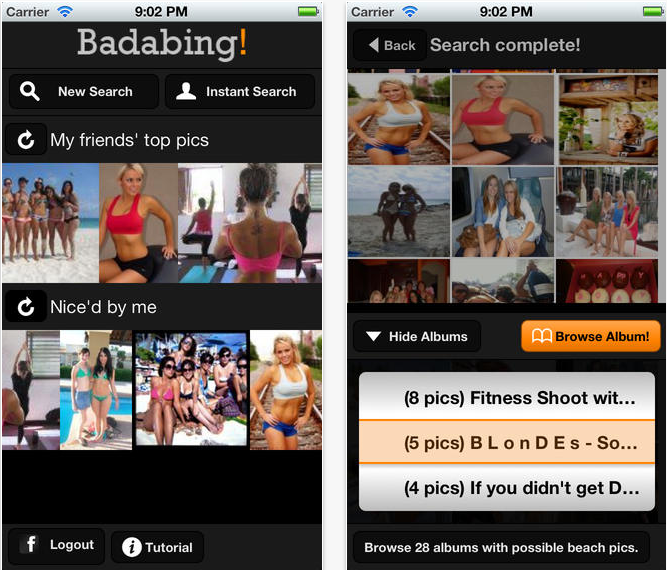 Do we really need to explain what's messed up about this? Image courtesy of Softwares de Morelos SA de CV / iTunes App Store.

In 2009, Harvard Business School professor Mikolaj Jan Piskorski found that the two biggest use cases of online social networks, in order, were men looking at women they don't know and men looking at women they do know. And looking at photos constituted 70 percent of all actions on the sites. As one male fan of Facebook ogling told Amanda Marcotte, "On Facebook you can stare as long as you want to—nobody's going to get mad because it's not them, it's just a picture."

So it makes sense that someone would write Badabing! a $1.99 iOS app, which combs your friends' photos to find "beach or pool pics" (read: women in bikinis), because normal creepy Facebook stalking is apparently just too time intensive. Reviews are middling, though (2 stars out of 5 for the latest version), so you might not have to delete all your beach pics until the app's image recognition algorithm improves.

2. When your secret admirer has an opening 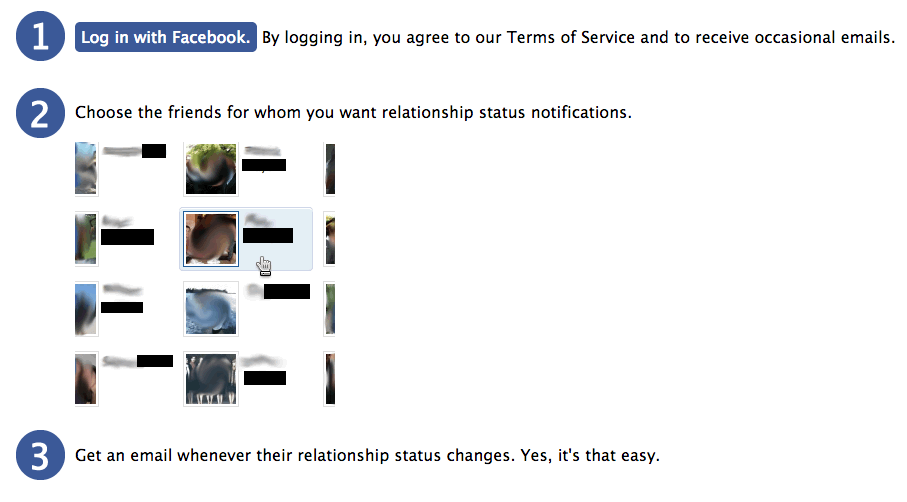 Rarely have the words "yes, it's that easy" been creepier. Image courtesy of Big Red Bulldog LLC.

This isn't too surprising in a way; obviously, if you're allowed to see your friends' relationship statuses, you'll be able to see when they break up with someone. But the fact that Breakup Notifier — an app which sends you an email whenever one of your selected crushes is newly single — is even possible ought to give us a bit of pause about putting relationship status information on profiles.

3. The way other countries would punish you 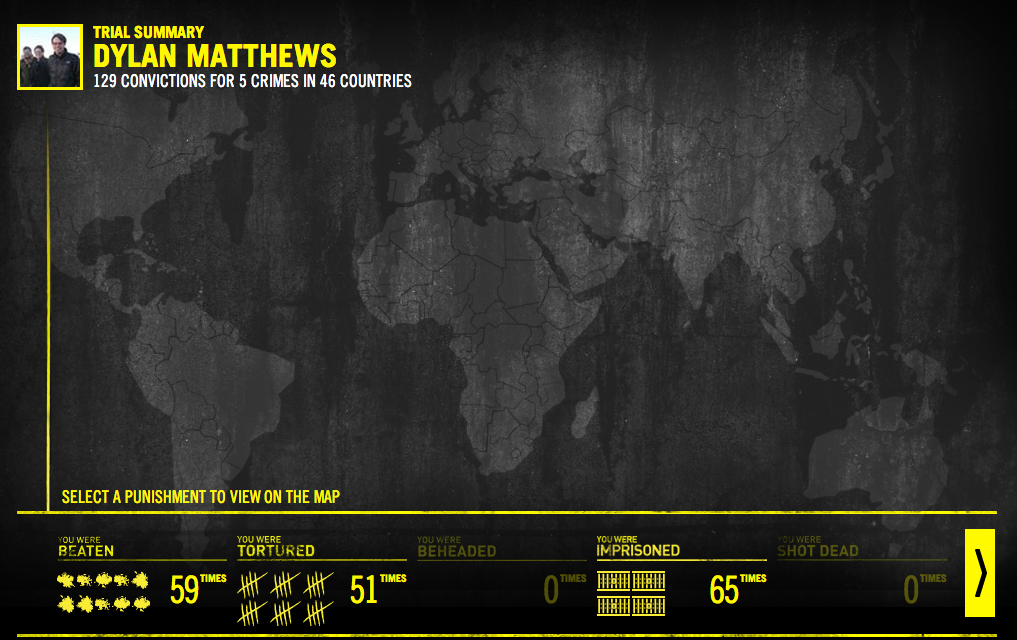 Probably the most powerful item on this list, the New Zealand branch of Amnesty International's Trial By Timeline emphasizes the potential for authoritarian governments to use social networks as a tool of oppression. The app uses your Facebook info to guess your occupation (being a member of the media put me on thin ice), whether you've had sex before marriage, whether you're an atheist, and a whole lot of other totally benign personality traits that can get you beaten and tortured in dictatorships. It then estimates the number of countries that'd punish you for those facts, and details exactly what penalties (including beatings, torture, and execution) they'd impose upon you.

4. When you'll get married 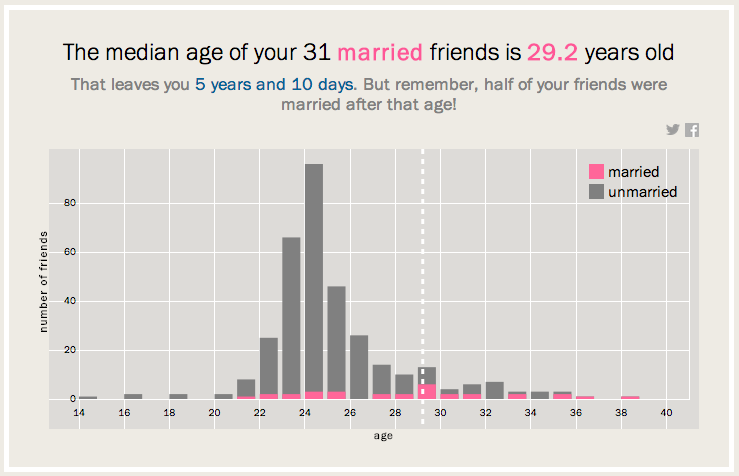 TIME Magazine's Chris Wilson built an app for Valentine's Day this year which attempts to guess people's ideal age at marriage. It works by measuring your married friends' median age. "Because you are probably friends with a lot of people close to your age," Wilson explains, "this figure will theoretically identify whether you have passed the point where many of your contemporaries start tying the knot."

It works less well if you have a lot of friends a generation or two ahead of you; if you're 16 and the only married people you're friends with are your parents or other older relatives, you're going to probably get a higher age.

5. When you're on the rebound 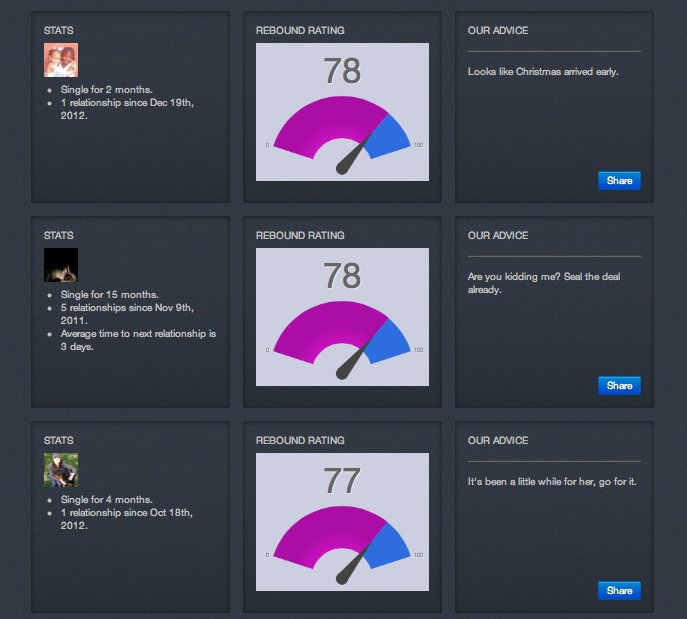 The advice is totally creepy too. Image courtesy of On The Rebound, via Huffington Post.

Like Breakup Notifier, the actual information necessary for On The Rebound — which, true to its name, tells you which of your friends have been single long enough for you to make a move — isn't particularly hard to get; unlike You Are What You Like or Digital Shadow, there aren't any algorithms or creative inferences going on, just simple repetition of relationship status data. That means that the less your friends put up about themselves and their romantic lives and interests, the less "well" it works. But such limitations don't make the vibe any less creepy, especially given that, as Buzzfeed's Katie Heaney notes, the app encourages men to prey on women's vulnerabilities (e.g. "her loneliness is your best attribute").

I mean, fair enough. Image courtesy of Stilwell and Kosinski.

David Stilwell and Michal Kosinski of the Psychometrics Centre at the University of Cambridge developed YouAreWhatYouLike.com, which estimates various aspects of your personality based on profile information (including likes, relationships, work history, education, current city, etc.) for both you and your friends. The five dimensions it estimates are:

Kosinski, Stilwell, and coauthor Thore Graepel reported in the Proceedings of the National Academy of Sciences that the model at use here can tell the difference between gay and straight men 88 percent of the time, between black and white users 95 percent of the time, and between Democrats and Republicans 85 percent of the time. Their research on how intelligence and sexual orientation are associated with liking different items lead to one of the finest paragraphs of academic writing I've ever encountered:

For example, the best predictors of high intelligence include "Thunderstorms," "The Colbert Report," "Science," and "Curly Fries," whereas low intelligence was indicated by "Sephora," "I Love Being A Mom," "Harley Davidson," and "Lady Antebellum." Good predictors of male homosexuality included "No H8 Campaign," "Mac Cosmetics," and "Wicked The Musical," whereas strong predictors of male heterosexuality included "Wu-Tang Clan," "Shaq," and "Being Confused After Waking Up From Naps." 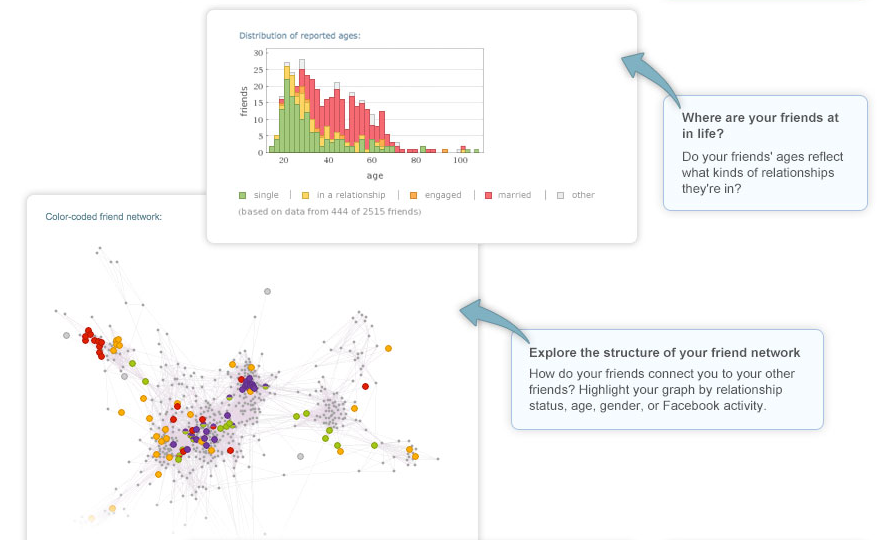 Wolfram Alpha's analytics tool for Facebook focuses heavily on mapping relationships: which of your friends know each other, where they live, how old they are, how many of them are married, etc. And many of the initial insights aren't that surprising. For example, it turns out that all of my high school friends are likelier to be friends with each other than with my college friends! But the approach gets more powerful the further out in the network it goes. Wolfram can also put together these reports for your friends based on information they share with you, and more comprehensive tools like netvizz can put together social maps of your friends based not just on their relationships but on mutually liked pages, connections between those pages, activity around those pages, etc.

Thanks to Liane Cassavoy at TechHive for pointing out a few of these.