Donald Sterling is a wealthy Southern California divorce attorney turned real estate developer who until 2014 also happened to own the Los Angeles Clippers, currently one of the best teams in the National Basketball Association. He's also a huge racist who's been caught on tape by TMZ apparently chiding his half-black, half-Latina girlfriend for appearing in Instagram photos with African Americans and for hanging out with Magic Johnson. The fallout from the story eventually led to the forced sale of the team to Steve Ballmer, the former CEO of Microsoft.

This wasn't the first time Sterling's been at the center of racism allegations.

What did Sterling say, exactly?

Speaking to his mixed-race girlfriend, Sterling said, "It bothers me a lot that you want to broadcast that you're associating with black people." And also, "I'm just saying, in your lousy f******* Instagrams, you don't have to have yourself with, walking with black people." And also, "You can sleep with [black people]. You can bring them in, you can do whatever you want. The little I ask you is not to promote it on that ... and not to bring them to my games."

You can hear it all here for yourself, courtesy of TMZ:

What were some of the past accusations against Sterling? 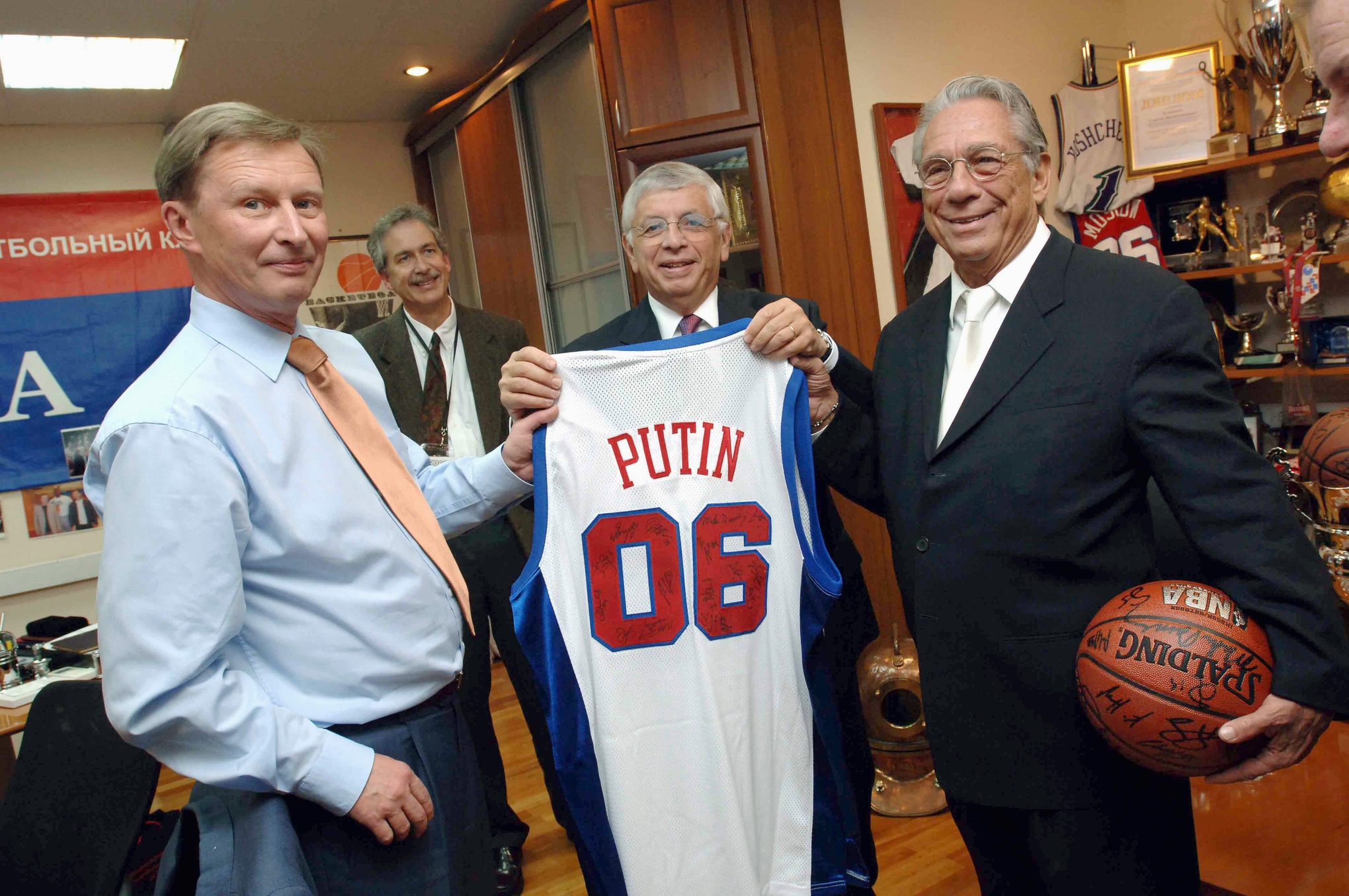 Sterling has been accused of a wide range of atrocious behaviors, from racist rental practices for his Los Angeles area apartments to sexual harassment of his employees. He's privately settled many of these cases and admitted nothing, but between court depositions and public accusations, there's a lot to go on.

In 2004, Sterling was sued by the Los Angeles Housing Rights Center for discriminatory rental practices. After buying the Ardmore Apartments complex, he attempted to force out minority tenants by refusing to do repairs and refusing rent checks, then accusing them of nonpayment. When told that a 66-year-old, legally blind, partially paralyzed tenant named Kandynce Jones wanted to be reimbursed for the damage to her flooded apartment, he reportedly said, "Just evict the bitch."

The case brought by the Housing Rights Center was eventually settled for an undisclosed sum. The plaintiffs were reimbursed $4.9 million for their legal fees, and the judge described the total judgment as one of the largest ever in a discriminatory housing case.

In 2006, Sterling was sued by the Department of Justice after he allegedly refused to rent to Mexican Americans and African Americans in his apartment complexes, reportedly saying that "black tenants smell and attract vermin." Sterling paid $2.73 million to settle the suit.

In 2009, former Clippers general manager and Hall of Fame player Elgin Baylor sued Sterling for wrongful termination on the basis of age and race. Baylor alleged that for years before his 2008 resignation, Sterling had frozen his salary at $350,000 per year for racial reasons (compared with $5.5 million per year for Mike Dunleavy, the white head coach).

He also alleged that Sterling had a "pervasive and ongoing racist attitude" while negotiating with African-American players, once telling Baylor that he wanted a team made up of "poor black boys from the South and a white head coach." Baylor eventually dropped the race-related accusations from the case, and a jury ruled in favor of Sterling in 2011.

Sterling is known for hiring dozens of female hostesses for his parties and charity events, reaching them through full-page newspaper advertisements like this one: 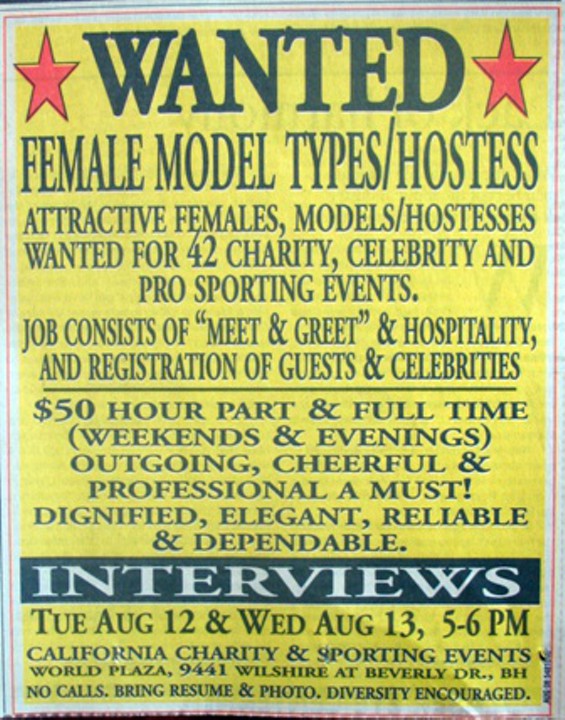 In several cases, some of the women later sued Sterling for sexual harassment.

In a 1996 suit, Christine Jaksy alleged that he touched her inappropriately and demanded that she visit friends of his to provide sexual favors. He also asked her to find him a massage therapist, saying, "I want someone who will, you know, let me put it in or who [will] suck on it." Jaksy and Sterling eventually reached a confidential settlement.

In 2003, Sterling himself sued a former employee and mistress named Alexandra Castro over the possession of a Beverly Hills house. The pair reached a confidential settlement, but Sterling's comments under oath as part of the deposition are worth noting: among other things, he explained, "When you pay a woman for sex, you are not together with her ... you're paying her for a few moments to use her body for sex. Is it clear?"

Was Donald Sterling any good as an owner?

Not if the goal is winning basketball games. In Sterling's first 30 years owning the team, they had a winning record exactly twice. This season and the two seasons before that, however, the team has been good. An awful lot of that has to do with the Clippers acquisition of point guard Chris Paul who's one of the very best players in the league. The team has other top talent including power forward Blake Griffin, but the Paul acquisition was the key. And it was made possible not so much by trading acumen as by a strange decision by former NBA Commissioner David Stern to veto a different deal that would have sent Paul to the Los Angeles Lakers.

Viewed in another light, though, Sterling has been very good at getting rich through his investment in the Clippers. So in a classic capitalist sense, he's an excellent owner. He's just not good at delivering winning basketball teams.

What did President Obama say about Donald Sterling? 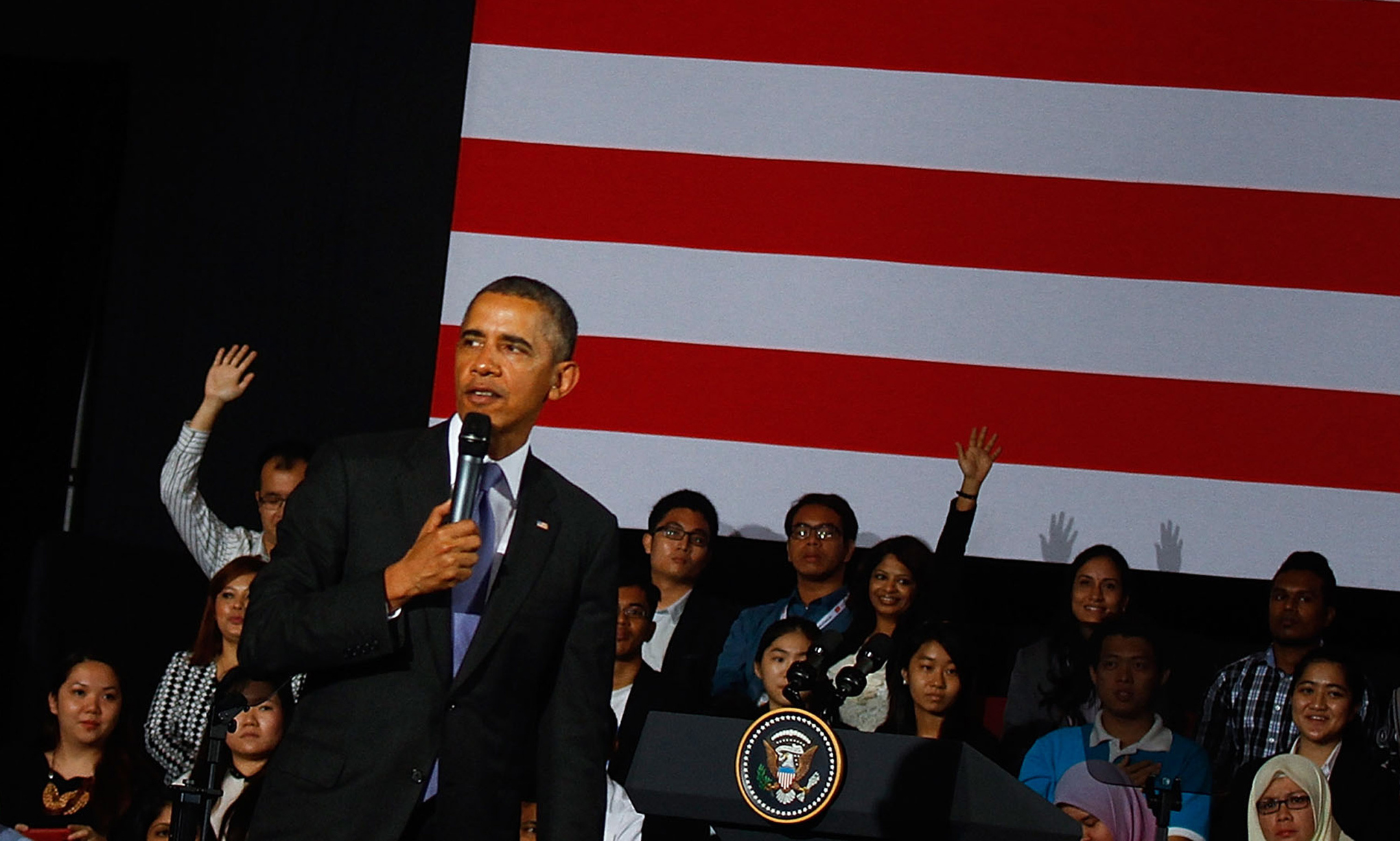 During a visit to Malaysia, Obama commented on the Sterling affair. Rahman Roslan/Getty Images

While conducting a news conference during a visit to Malaysia in 2014, Barack Obama spoke out about Donald Sterling:

With respect to the statements by the owner of the Los Angeles Clippers -- for our Malaysian audience, this is a sports team, basketball team in the United States. The owner is reported to have said some incredibly offensive racist statements that were published. I don't think I have to interpret those statements for you; they kind of speak for themselves. When people -- when ignorant folks want to advertise their ignorance you don't really have to do anything, you just let them talk. And that's what happened here.

I will make just one larger comment about this. The United States continues to wrestle with a legacy of race and slavery and segregation that's still there -- the vestiges of discrimination. We've made enormous strides, but you're going to continue to see this percolate up every so often. And I think that we just have to be clear and steady in denouncing it, teaching our children differently, but also remaining hopeful that part of why some statements like this stand out so much is because there had been -- there has been this shift in how we view ourselves.

What did the NBA Players' Association do?

The labor union for NBA players, the NBAPA, was in a bit of a strange situation. The union's president is Chris Paul, who is actually the star player on the Los Angeles Clippers. And at the time the union lacked a professional executive director in the wake of former executive director Bill Hunter's departure amidst a wave of litigation. In the interim, Sacramento mayor (and former Phoenix Suns point guard) Kevin Johnson was helping lead the search for a new ED.

On behalf of the National Basketball Players Association, this is a very serious issue which we will address aggressively. We have asked Mayor Kevin Johnson to expand his responsibilities with the NBPA, to determine our response and our next steps. As players, we owe it to our teams and our fans to keep our focus on our game, the playoffs, and a drive to the Finals.

The reported comments made by Clippers owner Donald Sterling are reprehensible and unacceptable. The National Basketball Players Association must and will play a very active role in determining how this issue is addressed. There needs to be an immediate investigation and if the reports are true, there needs to be strong and swift action taken. I have spoken with NBPA President Chris Paul and will be leading the NBPA in addressing the implications of this serious matter. I will be formally reaching out to the NBA today to determine our next steps. While I originally came on to lead the Executive Director search, this issue requires immediate attention from the Players Association. I will be keeping Chris Paul, the Executive Committee, and all player representatives informed of every step.

How did the Clippers players respond?

With displeasure, as you would expect. Before a crucial game, the Clippers registered their disapproval with the team's then-owner by taking off their Clippers-branded warmup gear:

The Clippers took off their shooting shirts and dumped them at center court. pic.twitter.com/Nod5QWsWJy

And then playing with their shirts inside out to obscure the Clippers logos:

The Clippers have turned their shirts inside out and are warming up in generic red shirts. pic.twitter.com/dUST40wBaO

When the game began, they played with their uniforms on (per league rules), but it's clear that the players are furious. Coach Doc Rivers indicated that his future with the team would be in doubt if the situation wasn't resolved in a satisfactory way.

What did the NBA do about this?

NBA Commissioner Adam Silver announced on Tuesday, April 29, that Los Angeles Clippers owner Donald Sterling will be banned for life from association with the Clippers or the NBA. Sterling will be prohibited from attending NBA games or owners' meetings, or from making any basketball decisions. In addition, Sterling was hit with a $2.5 million fine — the maximum allowed by the league constitution.

Silver went on to urge Sterling's fellow owners to vote to force him to sell the team; they agreed, prompting the sale of the team to former Microsoft CEO Steve Ballmer for $2 billion.

How big is the NBA fine compared with Sterling's net worth?

Additionally, forcing Sterling to sell the team will lead to a financial windfall. He bought the Clippers in 1981 for $12 million, and Forbes recently valued them at $575 million — a figure that is almost certainly an underestimate, given that the Milwaukee Bucks recently sold for $550 million. 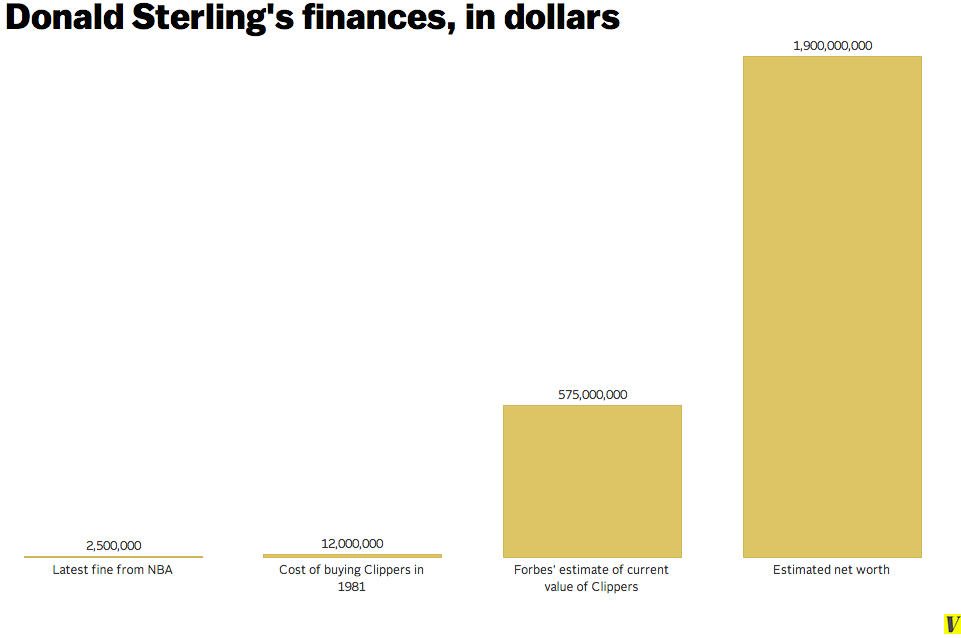 The dark, enthralling power of Succession

The problem with America’s semi-rich

Why the best aliens are just a little bit human