There hasn't been much patent reform news recently, but behind the scenes a fierce lobbying battle is raging. Companies who feel the patent system hurts them more than it helps them are lobbying for reforms to raise patent quality and rein in frivolous litigation. Companies that make a lot of money from their patent portfolios are afraid that these reforms will hurt their bottom lines, so they're lobbying against them. They've organized themselves into a bunch of organizations with seemingly identical names like "Partnership for American Innovation" and the "Coalition for Patent Fairness."

Vox is here to help. Here are five of the most influential groups, along with their stances and some of their most prominent members: 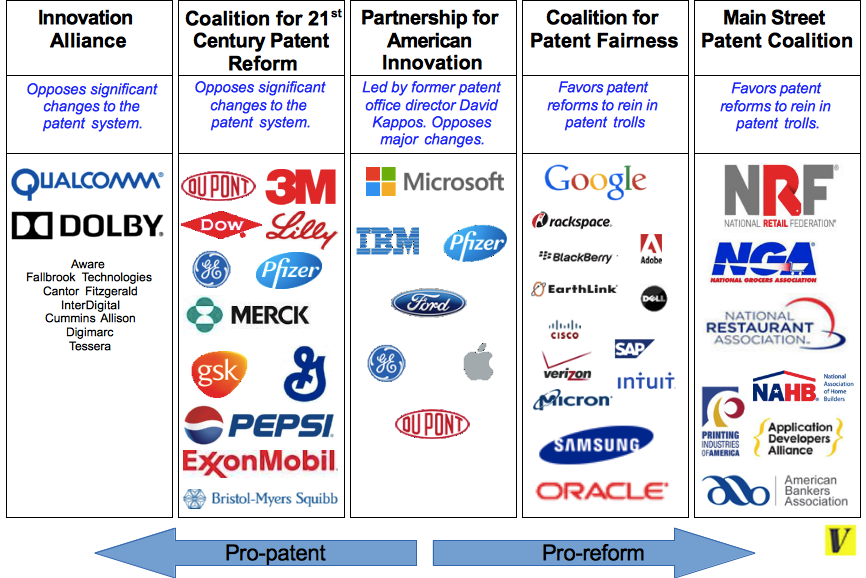 I've arranged them along an ideological spectrum. The two groups on the left are generally skeptical of proposals to rein in patent litigation and make it easier to invalidate low-quality patents. They fear that these proposals could weaken patent rights and reduce the incentive to innovate. The Innovation Alliance is led by Qualcomm, which makes a large share of its money from patent licensing and so isn't as concerned about litigation as companies that produce a lot of their own products. The Coalition for 21st Century Patent Reform consists of a lot of pharmaceutical and chemical companies that have always supported strong patent rights. (Disclosure: GE is Vox's launch sponsor.)

The middle group, the Partnership for American Innovation, is relatively new. It's headed by David Kappos, who recently stepped down as head of the patent office. It has stressed the importance of patent rights, but it's been somewhat vague on its specific policy views. Its members have a lot of patents, but some of them are also frequent targets of patent litigation, so they may be more sympathetic to some reform proposals.

The two groups on the right have been lobbying for legislation to rein in patent trolls, companies that produce no products themselves but make money by threatening litigation against other companies. The Coalition for Patent Fairness mostly represents technology companies that have long favored significant reforms of the patent system.

The Main Street Patent Coalition represents low-tech industries that are relatively new to the patent reform debate. In recent years, trolls have increasingly targeted restaurants, retail establishments, realtors, banks, grocery stores, and other businesses that haven't traditionally had a dog in the patent reform fight. Because many of these troll lawsuits are related to software patents (for example, patents on in-store wifi, scan-to-email functionality, or the "find a store" feature on restaurant websites), these industries have been especially supportive of efforts to invalidate more software patents.

The emergence of the Main Street Patent Coalition is a major reason patent reform is coming up again just three years after Congress passed the America Invents Act in 2011. That legislation made only modest changes after the technology and pharmaceutical industries fought each other to a draw. But a lot more industries are facing patent litigation than they were a few years ago, and they've jumped onto the pro-reform bandwagon.