Share All sharing options for: Keeping unauthorized immigrants from driving hurts their kids

Over the past few years, several US states have passed laws to allow unauthorized immigrants to get drivers' licenses — but the majority of states still prevent the unauthorized from driving legally. A new report from the Immigration Policy Center, called "Living in Car Culture Without a License: The Ripple Effects of Withholding Drivers' Licenses from Undocumented Immigrants," lays out the case that preventing immigrants from driving legally can cause lasting damage to Latino and immigrant populations — including making it harder for US-born kids of undocumented immigrants to assimilate. It also bolsters an argument made by some law enforcement officials that allowing all immigrants to get drivers' licenses would make roads safer for everyone — by putting fewer unlicensed, untrained, and uninsured drivers on the road. 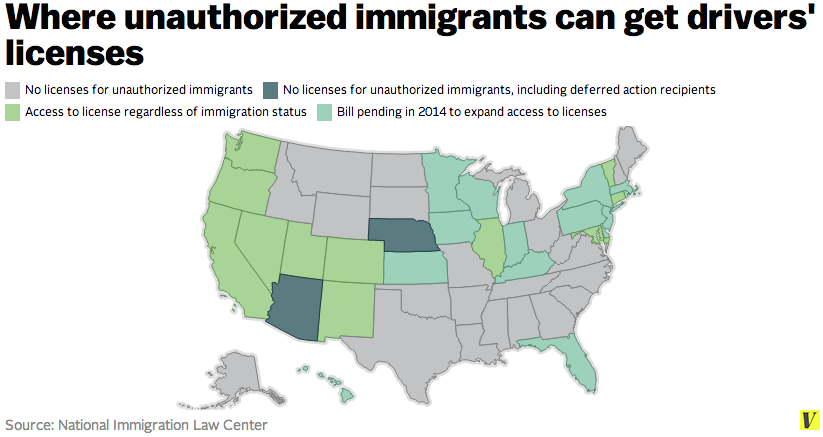 What the report says

The Immigration Policy Center report notes that in a country that depends heavily on driving, Latino immigrants are much less likely to get to work by driving alone than US-born workers. In fact, Latino immigrants use every other method of commuting more frequently than US workers do, because the difference in rates of driving alone is so great. This is largely due to the inability of unauthorized immigrants to get drivers' licenses in most states.

According to the report, this difference in car use and inability to drive makes it harder for immigrants to assimilate in and contribute to their communities in several different ways:

Public safety. Many unauthorized immigrants feel they have no choice but to drive illegally in order to get to work. These immigrants, though, feel more frightened and stressed about driving than people with drivers' licenses do. Some immigrants even had trouble learning how to drive in the US, since they had not driven in their (less car-dependent) home countries.

Having drivers without licenses on the road is a public safety threat to other drivers. The California Department of Public Safety found that unlicensed drivers were three times more likely to cause a fatal car crash as licensed drivers were. Drivers without licenses can't get car insurance, either, so they're not able to cover any damages when they do get involved in accidents. And when immigrants are worried that a cop coming to investigate an accident is going to end up arresting them and turning them over to ICE to be deported, they may flee the scene — the chief of the Los Angeles Police Department has said that California's new law giving licenses to unauthorized immigrants will cut down on hit-and-run accidents.

Economic integration. The report points out that workers who have cars and are able to drive are better off economically than those who don't: they're "more likely to find jobs, work more hours, and work higher wages." This puts unauthorized immigrants at a serious economic disadvantage, unless they need a car so badly that they're willing to break the law and drive without a license.

Furthermore, the report points out, putting unauthorized immigrants at an economic disadvantage hurts their families and neighbors as well. For one thing, family members are worse off when they have to support relatives in poverty. For another, the most common way for Latino immigrants to commute is to carpool, often with an authorized immigrant serving as the driver — but the report points out that if the driver's own work is restricted by when he has to pick up or drop off other workers, that driver won't be able to work overtime, change his schedule, or take a different job. So it impedes the ability of legal immigrants who can drive to advance their own careers.

Generational assimilation. The report notes that unauthorized immigrants who can't drive are less likely to come to events at their children's schools, or to be able to enroll young children in early childhood education programs — potentially harming their kids' academic achievement. More abstractly, the report says, the "structural context" in which kids of immigrants grow up has an impact on how well they're able to assimilate and thrive — and having parents who are legally unable to drive is a regular reminder that the "structural context" is unfriendly to their families. And, of course, it's harder for immigrant families to assimilate when they don't have social mobility, and (at least in America in 2014) it's harder for them to have social mobility when workers can't drive.

What the report means

are kids of unauthorized immigrants able to assimilate as well as their predecessors?

One of the most contentious aspects of the immigration debate is whether current immigrants to the US are assimilating or not. While some Americans assert that current, mostly Latino immigrants are different from previous waves of immigrants, and less willing to assimilate, research has shown that today's immigrants tend to follow the same pattern as their predecessors: each generation gets more and more assimilated, for better (learning English) or worse (first-generation native-born Americans commit more crimes than their immigrant parents).

However, it's not clear that children of unauthorized immigrants are able to assimilate as much as their peers, and there isn't much data on the subject. This report points to a few ways in which kids of unauthorized parents are accumulating disadvantages on a daily basis.

As several states consider passing laws to allow unauthorized immigrants to get driver's licenses, the IPC report shows that passing those laws might help these states down the road.